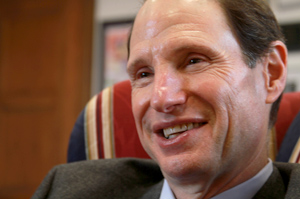 Sen. Ron Wyden, D-Ore., is seeking bold new authority for states to preempt the health care overhaul law as early as 2014, and he expects that governors will help pitch his legislation in Washington. The new law gives states the ability to substitute their own reform plans in 2017 if, and only if, they can convince the federal government their approach would cover the same number of people with comprehensive insurance, and at a similar price. States could even ditch the law’s controversial individual mandate that will require most people to purchase insurance. But many states, including Oregon, he says, want this flexibility as soon as possible, and so he has introduced a bill with Sen. Scott Brown, R-Mass., to push up the date.

AUDIO: Checking In With Wyden

Last year, Wyden aggressively lobbied Senate colleagues on both sides of the aisle to support his Healthy Americans Act, a bill designed to move Americans away from the employer-based health care system. That measure gained little traction, but he believes many states will like his new legislation. And his plans don’t stop there. He hinted that next year he might pursue a tax incentive to reward insurers that keep premium costs down. KHN’s Mary Agnes Carey and Marilyn Werber Serafini recently spoke with Wyden. Edited excerpts of the interview follow.

Q: Why give states flexibility to try other approaches to health system change even before most of the national overhaul law takes effect?

A: This gives everybody a chance to show what works. [For example,] you go out and talk to a bunch of conservative folks and they’ll tell you they want consumer-driven plans. They want tort reform. They don’t want a bunch of big, bumbling government [programs]. With this approach they can go to the legislature and say, ‘We can cover folks just like that bill in D.C., and give us a chance to do it.’ I think substantively this makes sense, I think politically it makes sense.

Q: Your mission during last year’s debate was to have personal conversations with nearly every senator about your Healthy Americans Act, which did not become law. What is your strategy for getting your new legislation into law?

A: My goal with Sen. Brown was to get it in so it started to percolate with the states and with the governors early on. What drives this is Republican governors, who are going to say, ‘You know, we’re not going to get repeal, we’d like to get out from under the individual mandate, and we hear there’s something back there that might give me a shot at doing it.’ The Vermont governor has already come on out and said, ‘I want to have a single payer system.’ [Oregon Gov.-elect John] Kitzhaber has already talked to [Health and Human Services Secretary] Kathleen Sebelius about his interest in some sort of waiver. Some [state officials] want to go earlier. What I’m talking about with Scott Brown kicks in in 2014. My governor probably wants a waiver in the next 15 minutes. I think you’re going to see early next year a significant amount of action at the state level with state legislators and governors.

Q: How can states get waivers to bypass the federal requirement that most people purchase insurance when states cannot guarantee ahead of time that they can meet the federal conditions? What happens if the state approach fails to cover as many people, for example?

A: [Sebelius] gets the last word. She has the authority to pull it. When you’re doing waivers and innovative work, you can say for certain that things always end up a little different than anticipated, but we tried to strike a balance between federal authority and state authority. You give the secretary the authority to have the last word. Then you have the review provisions, so if you’re not meeting your federal obligations, they can pull it at any point. It’s a pretty good balance, recognizing it’s a bit of an inexact science.

Q: Can you get bipartisan support for your proposal in the Senate, when an ideological battle over whether to repeal the law or move forward is in full swing? Sen. Robert Bennett, R-Utah, lost his GOP reelection bid after becoming the main Republican sponsor of the Healthy Americans Act. Will Republicans be reluctant to cross over and work with a Democrat on your new proposal?

A: There is no question that when folks try to find common ground, and try to find ways to work together, you put yourself out there, where the far right and the far left can take pokes at you. But I continue to believe that’s what the public wants. Read Bob Bennett’s farewell address on the Senate floor. He said he lost because of [the Troubled Asset Relief Program]. If you look at what happened in Utah, Bob Bennett faced a closed convention with a few hundred people who kept him from being on the ballot. Based on what I’ve seen, if Bob Bennett had had a chance to talk to the larger electorate, as a Republican nominee, he would have won by a bigger margin than I did, and I won 57 to 39 [percent].

Q: Are Democrats rethinking their support of the health overhaul’s individual mandate, which requires most people to purchase insurance by 2014?

A: I do think when you talk to people about whether or not there should be personal responsibility in health, people say people ought to be personally responsible. Much of this issue comes about if people are required to do something and they end up spending a lot of money for something they don’t much like, you bet they are going to be furious. This has been a flashpoint in the health care debate from day one. Everyone understood the tension between people being required to do something and the question of how do you come up with affordable coverage. I wanted to try to have something that might get some traction.

Q: What is the Democrats’ best defense against GOP attacks on the health law?

A: If you’re not for the president’s proposal people say what are you for? The country clearly does not want to go back to the days when you can hammer someone for a preexisting condition and you have a culture that essentially says the health care system works for you if you are healthy and wealthy. Piecemeal reform can be as complicated and as expensive and bureaucratic as [comprehensive] reform. It’s not going to be enough to have some pie in the sky ideas. If all they do is bring it down I don’t think that’s going to fly.

Q: How can the government encourage health insurers to keep premiums down?

A: If premiums go up again, [insurers’] role will be front and center. You can almost follow the script, they will say the reason the premiums are going up is because of the law. Certainly they will get huge pushback. People will bring out their profits and the like. One of the things I’ve been looking at  I’m not ready to do  is that there are considerable taxes on insurers over the next few years. [But] if [insurers] hold their premiums down, they should pay less tax. If they don’t hold premiums down, they should pay more tax. I’m not proposing that today, I’m not introducing a bill on that. I’m going to look at it next year.