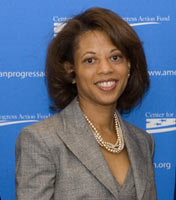 Career Path: Barnes worked in private practice at a major New York law firm before becoming director of legislative affairs for the U.S. Equal Employment Opportunity Commission in 1992. She then served as assistant counsel for the House Judiciary Subcommittee on the Constitution, Civil Rights and Civil Liberties and as chief counsel to Sen. Edward Kennedy, D-Mass., on the Judiciary Committee. She left Capitol Hill in 2003 to become a lobbyist and later became an executive vice president for policy at the Center for American Progress and a senior adviser to the Obama presidential campaign.

Why She’s a Player Now: Barnes is President Obama’s top domestic policy staffer, and her knowledge of the congressional legislative process will serve her well as the health care debate continues. She is an advocate for women, children and minority groups and will work to ensure these groups are not overlooked in a health overhaul bill.

Quote: “I think there are many members of Congress who have been long time supporters of a single payer system, who would say I believe in that, but I believe that we’ve got to build on the employer based system that we have today.” (CNN, May 16, 2009)

Read about the other ‘Players‘.