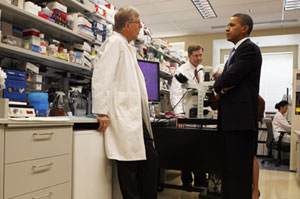 For over a decade, Collins led the Human Genome Project, overseeing the federal government’s race to map people’s DNA. The project finished in April 2003, some 18 months early and $300 million under budget, and has been transforming the understanding of human health and disease ever since.

Today, as director of the National Institutes of Health, Collins is on a mission to guide his agency to use science to improve the nation’s health system, starting with individual patients. As part of the stimulus funding – the American Recovery and Reinvestment Act (ARRA) – the NIH received $400 million to bolster its work in the area of comparative effectiveness research (CER). And President Barack Obama’s budget proposal for FY 2011, while cutting other programs, increased the NIH budget by $1 billion, or 3.2 percent.

The NIH, Collins said during his first official agency address as director, “should be right in the middle” of the conversation about an overhaul of the nation’s health system. However, translating what scientists and physicians know about available treatments and risks for disease to the public can be tricky, Collins says, adding he’s committed to empowering researchers to move from scientific discovery to the development of new therapies.

Collins, author of the new book, “The Language of Life: DNA and the Revolution in Personalized Medicine,” discussed the challenges of communicating such information to the public in a way that influences their health care behavior with KHN’s Jennifer Evans. Here are edited excerpts of the conversation.

Q: President Obama has made it clear that lowering health care costs remains at the core of his effort to overhaul the health system. One way your agency has been asked to help is through comparative effectiveness research. What do you see as the value of CER?

Research ought to do something to tell us what works. If you have multiple ways of approaching a particular medical problem that are all being used out there by some patients and some physicians it would be nice to know which of those approaches actually has the greatest benefit. This is an opportunity to provide the evidence that health care reform needs in order to design a system that offers to people interventions that are actually well-validated that you know are going to be beneficial.

Q: What are the limitations of this research?

Obviously, it’s expensive. If you are going to compare two different approaches to a problem you generally need a lot of people and you need to be able to conduct a randomized study. Otherwise, you may not get an answer that is trustworthy; it might have been based on some bias. [That] takes a lot of organization. You may have to enroll people for some time. You have to do very careful data analysis. Sometimes you get a clear answer and sometimes it’s kind of a draw, and you have to be prepared for that as well.

One concern that some people have raised is whether, in the process of doing CER, you lose the information about the individual, which could also be very important. I don’t see that as a real concern as long as you think about it and make sure that you are collecting individual information as well, just in case there’s a subset of people that actually respond [to a treatment] in a very different way. You wouldn’t want to lose that by blurring everybody all together.

Q: The public’s introduction to how CER could advise health care services came late last year with the U.S. Preventive Services Task Force recommendations on mammography. What do you make of the public outcry that followed these recommendations?

The recommendations obviously hit a nerve. This has been a controversial subject for many years and it is not surprising therefore that a change in recommendations would actually cause a good deal of interest and, in fact, an outcry from those who didn’t quite agree with them.

It was clear mammograms carried out on women in their 40s can, in fact, be life-saving. That was not in doubt. The question is: Are the small number of lives saved worth it, in terms of all the false positives, and the consequences that occur to people who have those false positives and the cost associated with them? And where the task force came down was not where a lot of other people thought they should come down. It was kind of a snapshot of the way in which the interface between data generation and research plays off in implementation. It isn’t always easy. This is not a simple transfer of information into policy-making.

Q: What might this reaction say of the challenges associated with communicating CER to the public?

This is a complicated conversation; we ought not to just drop information into the middle of that without a lot of prior explanations of how these recommendations are arrived at and how, at some level, there is some ambiguity.

Q: As a leader of the Human Genome Project, you had to take a complex subject and effectively make it relevant to the public. With that in mind, what is the best way to approach translating the results of CER to the public, particularly when they challenge previous recommendations?

I think the personalizing of the recommendations is part of the solution to the current confusion. You wouldn’t go into the shoe store and just pick shoes off the rack without noticing if they were your size and yet, oftentimes with medical recommendations, that’s kind of what we’ve had to do because it was the best information we had.

As we learn more about individual’s risk  from family history to DNA testing to understanding of environmental exposures  we ought to be able to come up with recommendations that are more personalized. I think people are ready for that. I think they’re hungry for that. I think they are more likely to be responsive to that, but we have a long ways to go in terms of preparing people for that kind of individualized approach to medicine.

Q: CER isn’t the only way the NIH can help provide new avenues to driving down health care costs. What role can personalized medicine play in “bending” the health care cost curve?

A lot of personalized medicine is going to be about prevention. While that may not bend the cost curve overnight it is something that everyone agrees we should do more of, if we’re serious both about giving people a chance to live long and healthy lives and also reducing health care costs.

Personalized medicine is all about trying to come up with ways to give people information about themselves, not in generic way, but in a very specific way, that will motivate actions that will help them stay well. I think that’s an exciting paradigm but we need a lot more information about how people actually take advantage of it  whether the information is family medical history which is a cheap, genetic test, or whether it’s DNA-based or whether it’s about environmental exposures. All of [those pieces of information] ought to be folding into an opportunity for every person, with their health care provider, to look at their risks and make decisions about how to reduce those risks.

We also need to understand health behavior better so there’s a real opportunity here for behavioral research to identify what is it that motivates people to change behavior and how can we be sure to that we not only provide information, but do so in a fashion that’s intelligible, and it actually is presented in a way where people can tell you six months later what was told to them.

Q: Do you have any concerns that an emphasis on CER could slow recent gains in the area of personalized medicine?

I think the personalized medicine strategy and CER strategy are part of the same question. We want to find out what works in therapeutics for each individual. There will often be more than one therapeutic intervention, so you have to compare them. But you also want to know what’s different about the individual that might have an influence on that answer. That means you want to do a study that does both of those things. If you do either one alone, you’re probably missing out on the info you’d most like to have.

Q: What are you doing to understand how people get the message  about their health and about their risks?

NIH is supporting several studies to look at what people do with predictive information about future health risks, based upon standard measures of things like cholesterol, but adding to that DNA testing, family history, other epidemiological risk factors, and then studying: Do people understand information, do they realize this is not simply yes/no, this is statistical risk, can they repeat that information a few weeks later, did it actually stick, over a course of a year time and what have they done in terms of their health behaviors?

I had my DNA tested in order to see from a personal perspective, does it really affect you? And I was a little bit, yeah yeah, I know this stuff, and it did affect me to find out that I was at risk for diabetes, which I had no family history of, but my family has all been extremely lean and I was not so lean as I discovered when I got this information. And it had an impact. I changed my diet. I got in an exercise program. I lost 25 pounds. And I’m glad I did.

Now, I should’ve done that anyway and that’s part of the thing that diffuses the conversation. Don’t smoke, exercise, eat right. But we all are pretty good at ignoring that. And this was a bit of an opportunity for a wake up call. Maybe you’re not immortal or maybe your DNA is not perfect. Maybe you might want to adjust a few things to give you a better chance at a long life. I wrote about this in this book on personalized medicine, which was my ‘full monty’ about my own DNA.