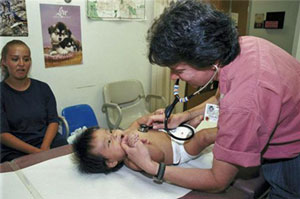 (Photo Courtesy of the Indian Health Service/U.S. Department of Health and Human Services)

Yvette Roubideaux knows first-hand the difficulties faced by patients of the Indian Health Service. A member of the Rosebud Sioux tribe who grew up in South Dakota, she often waited five to six hours to see a doctor-and the physician was rarely a Native American. But she also has seen the pinnacle of American medicine. Determined to improve health care for American Indian communities, she opted to become a doctor and attended Harvard Medical School.

Today, as director of the Indian Health Service, Dr. Roubideaux is responsible for the health care of 1.9 million American Indians and Alaska Natives. Founded in 1955 as part of the Department of Health and Human Services, the agency provides free health care to patients from 564 federally recognized tribes who live primarily on or near reservations in 35 states across the Western United States and Alaska. Throughout its history, the IHS has been underfunded and understaffed while its patient population has suffered disproportionately from certain diseases and conditions, including tuberculosis, diabetes and alcoholism.

But Roubideaux sees opportunities ahead. She says her agency has “a lot to teach the rest of the country,” whether in the form of the models provided by community-based programs for diabetes or its electronic medical records system.

The IHS received a significant funding boost — $590 million — in last year’s stimulus package to support community-based health and public health projects. The president’s budget calls for $4.4 billion FY 2011, an increase of $354 million, or 9 percent, over that of fiscal 2010 when the agency received a 13 percent increase – the largest jump in 20 years. The fiscal2011 amount represents the biggest annual budget increase for any HHS agency, which Dr. Roubideaux called a testament to the president’s continued commitment to “improve the health status of American Indians and Alaska Natives.”

Q: What do you think about the current status of IHS and what are your priorities for the agency?

The American Indian population has been growing. Health care costs are growing. Medical inflation has been skyrocketing. We have also been struggling with the cost of providing health care in rural areas. [I want] to improve the quality and access to care for the patients we serve and make all of our work transparent and accountable and fair and inclusive.

Q: Some experts praise the IHS for providing well-managed services. What lessons might the agency offer to lawmakers in terms of health reform and controlling costs?

A: In the IHS, there are over 600 hospitals, clinics and health stations. … We have a lot to teach the rest of the country, especially in rural settings and [regarding the provision of care to] an underserved population. We have a lot of great examples of working in partnership with our local communities on health issues.

[For example], diabetes is a huge challenge for our country. In the Indian Health Service, we’ve been facing the epidemic of diabetes since the 1970s. We’ve had the opportunity with some Congressional funding [to create] special diabetes programs for Indians, to really look at how we can address both the prevention of diabetes and the treatment of diabetes in working in partnership with our communities.

Also, the Indian Health Service has, for many years, had an electronic record system called the Resource Patient Management System (RPMS). … It has been able to provide not just health information on our patients, but also assist us with administrative and business functions. I think that is a great example of how we can help teach the rest of the country how to do these things.

Q: How do changes in Medicaid and Medicare programs, as well as the Children’s Health Insurance Program (CHIP), affect the Indian Health Service?

A: These types of third party reimbursements are critically important because in some of our facilities over half of the budget is made up of collections from caring for patients who have this type of coverage. So, certainly any changes will impact us. We’re very optimistic that if more American Indians and Alaskan Natives are covered by [this] type of health insurance then it potentially could help us in terms of third party revenues.