Viewpoints: Lessons From An Estranged Father On The Opioid Epidemic; Important Screenings For Mental Health Care

Opinion writers express views on these health topics and others.

The Washington Post: Addiction Is A Disease. My Drug-Addicted Parents Showed Me That.
My parents. The drug addicts. In 2012, four years after my mom’s overdose death, I began corresponding with my dad, Steve, then an inmate in jail. He and I had been estranged for years. I blamed him for making my mother an addict — essentially, for killing her. However, when my husband and I became parents, I had an overwhelming need to know how my parents came to choose drugs over me. Steve was the only one left to ask. (Sosha Lewis, 8/3)

Chicago Tribune: Stop Keeping Stashes Of Unused Opioids In The Cabinet
Our son Adam died in September 2015. He overdosed on fentanyl, but the start of his addiction began with opioid prescription painkillers from past surgeries that were in the kitchen cabinet of our New Hampshire home, innocently next to vitamins, Tylenol, and cake sprinkles. Ordinary stuff. Now, we have extraordinary grief. We've spent every day since then thinking about what we could have done differently. If you've lost a child to an opioid overdose, you find that for every answer you come up with, there are many more questions to face. We didn't even consider locking our prescription opioids – why would Adam or our three other children be interested? We never thought there was a chance that our unguarded opioids would tempt them or worse, lead to addiction. (Jim and Jeanne Moser, 8/3)

The Washington Post: Three Ways To Get People The Mental-Health Care They Need
Recent high-profile celebrity suicides have gotten people talking about mental-health care. Unfortunately, too many Americans from all walks of life are not seeking the help they need to care for their most important organ, their brain. This applies to those experiencing thoughts of self-harm and symptoms of bipolar disorder, post-traumatic stress disorder and other mental-health problems. Often, the barrier is awareness of their right to mental-health care under the law. (Kate Farinholt, Jean Harris and Rhonda Thissen, 8/3)

Boston Globe: When Sexual Abuse Is Common Knowledge — But Nobody Speaks Up
The #MeToo movement has shown not only how rampant sexual abuse is, but also how often third parties disregard it — or even enable it. At least 16 people admitted witnessing or knowing of Harvey Weinstein’s sexual abuse; his behavior was notorious within Miramax and the Weinstein Company. (Zachary Kaufman, 8/3)

The Washington Post: Migrant Kids Were Stripped, Drugged, Locked Away. So Much For Compassion.
When accounts of abuse emerged in June from a detention center for migrant minors in Virginia — children as young as 14 stripped naked, shackled, strapped to chairs, their heads encased in bags, left for days or longer in solitary confinement, and in some cases beaten and bruised — it sounded like a scene from the Soviet gulag. This institution, the Shenandoah Valley Juvenile Center, near Staunton, couldn’t possibly be in America. And if it was, it had to be an extreme outlier — a place that, while overseen by the Office of Refugee Resettlement at the Department of Health and Human Services, simply could not typify the federal government’s handling of children, undocumented or not, who make their way into this country. (8/5)

Stat: Crowdfunding For Unproven Stem Cell Procedures Spreads Misinformation
Using online platforms such as GoFundMe to solicit donations for health-related needs can help people access legitimate health services and avoid medical debt. But this kind of medical crowdfunding also raises funds for a multitude of scientifically unsupported procedures. We are particularly concerned about crowdfunding campaigns for unproven and unlicensed stem cell interventions, for which there is little or no evidence of safety and effectiveness. Campaigns that seek donations for unproven stem cell interventions waste donors’ money, spread misinformation, and obscure the significant risks that unproven stem cell procedures can pose to patient safety. (Jeremy Snyder, Leigh Turner and Valorie A. Crooks, 8/6)

The New York Times: The Ineffectiveness Of Employer Wellness Programs, And The Importance Of Randomized Trials
The gold standard of medical research, the randomized controlled trial, has been taking a bit of a beating lately. An entire issue of the journal Social Science and Medicine was recently devoted to it, with many articles pointing to shortcomings. Others have argued that randomized controlled trials often can’t address the questions that patients and physicians most want answered. I recently wrote about the limitations of the method in studying effectiveness, which is what we care about in real-world situations. (Aaron E. Carroll, 8/6)

Georgia Health News: Why Can’t We Have Both Mental Health Services And Gun Control?
Yes, we need increased mental health funding for a variety of reasons. But there is still more that can be done legislatively to lower shootings and fatalities. (Jack Bernard and Doug Skelton, 8/4) 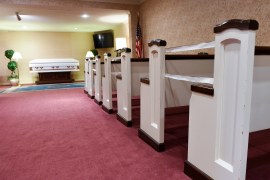