For some people, the promise of employer-provided health insurance is reason enough to take a job or stay put in one. But unexpected events — a corporate bankruptcy or sale, for example — can undermine the security of on-the-job coverage and leave both employees and retirees with few affordable options.

Starting in 2014, the Affordable Care Act will make it easier for people who lose their job-based coverage to get comprehensive health insurance at a price they can afford through the state-based health insurance exchanges. 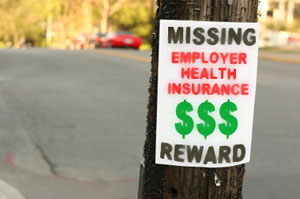 For Robin Hunt, however, 2014 seems like a long way off. Diagnosed with breast cancer two years ago, Hunt, 57, had been insured through her husband’s employer, a construction company near their home in Tyler, Tex. The couple finds their plan very expensive: They pay a premium of $240 a week to cover both of them, and they have a $5,000 deductible.

Last year, Hunt caught viral pneumonia; they are still paying off the out-of-pocket expenses from that illness. But the plan helps Hunt cover the cost of follow-up care and pay for several medications, including Arimidex, a drug that helps reduce the likelihood of a recurrence of her breast cancer.

In December, the Hunts learned that their premium would rise to $400 a week. Then they got even worse news: The company said it couldn’t find enough people to sign up for the plan among the firm’s 50 employees and their family members, and so coverage would end on Dec. 31.

Hunt fears that with her cancer history, buying a plan on the individual market will be impossible. “I don’t know what I’m going to do or where I’m going to turn,” she said in an interview. “I shudder not to have insurance for the first time in my life.”

Under a 1996 federal law known as HIPAA, people who lose their group coverage and don’t have other health insurance options may be eligible for guaranteed individual coverage in a state-designated plan without facing preexisting condition exclusions.

Similarly, some states require that some people who lose their group coverage be offered a “conversion policy” that lets them convert their group coverage into an individual plan. But benefits in these plans may not be as good as those in the group plan, and their prices may be high, experts say.

“In most states, there’s no limit on how much more a HIPAA policy can cost than a regular plan,” says Cheryl Fish-Parcham, deputy director of health policy at Families USA, a consumer advocacy group. “The plans often only include high-risk people, and rates are high.”

The couple is not eligible to retain their insurance through COBRA, a federal law that allows workers at companies with 20 or more workers to pay the full price of their employer-sponsored coverage for 18 months after they are laid off or leave their job. In Hunt’s case, her husband is remaining in his job but the health plan is being discontinued. So there is no job loss and no health plan to continue with, even if they wished to buy it.

For example, if a company is reorganizing under Chapter 11 of the bankruptcy code and plans to continue operating, the health-care plan may change but often continues to operate, says Tom Billet, a senior consultant at human resources consultant Towers Watson.

But if a company is liquidating under Chapter 7, laid-off workers may be in a tougher spot. COBRA is not helpful because there’s no longer a company health plan to buy. If that happens, they may be eligible for guaranteed coverage on the individual market, as Hunt was.

In situations where one company buys another, “there’s a whole spectrum of possibilities,” says Bruce Richards, chief health-care actuary for human resources consultant Mercer. The acquiring company may continue the same health coverage that employees at the acquired company had, at least for a time, or it may merge the new employees into the acquiring company’s health plans. “It could be better or worse than their current employer’s plan,” Richards says.

Although active employees face uncertainty when a company changes hands or goes through bankruptcy, retiree health coverage may be particularly vulnerable, experts say.

Retirees who are 65 or older can rely on Medicare and a Medicare supplemental plan to fill in coverage previously provided by their retiree medical plan. Retirees younger than 65 are not so lucky. “Early retirees are in the worst spot possible if there’s a bankruptcy,” Richards says. Chances are, “their benefit plan will be terminated.” If a company is sold, retiree benefits may or may not change, say experts.

“In general, a company continues the retiree coverage for those that are in the plan,” Richards says. However, “that doesn’t mean that at some point they can’t terminate it.”

Workers and early retirees alike will have more options in 2014 when the state-based health insurance exchanges begin selling comprehensive coverage to people who don’t have access to health insurance elsewhere. Those with incomes up to 400 percent of the federal poverty level may be eligible for premium tax credits to help defray the cost.

At that point, even if workers are eligible to continue on their employer’s plan under COBRA, they may not want to, experts say. Under COBRA, people have to pay 100 percent of the premium, plus a 2 percent administrative fee, in many cases.

Buying coverage instead on the exchanges would probably be a better deal. “You’re unemployed; your income just dropped,” says Paul Fronstin, director of the health research and education program at the Employee Benefit Research Institute. “If you go onto the exchange and buy coverage, you might be eligible for a subsidy.”

As for Robin Hunt, she says she may remain uninsured. In the meantime, she’s been applying for any job that might offer health insurance, but so far without success.