When visiting the doctor, there may be strength in numbers.

In recent years, a growing number of doctors have begun holding group appointments — seeing up to a dozen patients with similar medical concerns all at once. Advocates of the approach say such visits allow doctors to treat more patients, spend more time with them (even if not one-on-one), increase appointment availability and improve health outcomes. 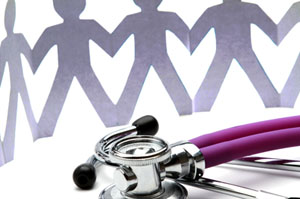 Some see group appointments as a way to ease looming physician shortages. According to a study published in December, meeting the country’s health-care needs will require nearly 52,000 additional primary-care physicians by 2025. More than 8,000 of that total will be needed for the more than 27 million people newly insured under the Affordable Care Act.

“With Obamacare, we’re going to get a lot of previously uninsured people coming into the system, and the question will be ‘How are we going to service these people well?’ ” says Edward Noffsinger, who has developed group-visit models and consults with providers on their implementation. With that approach, “doctors can be more efficient and patients can have more time with their doctors.”

Some of the most successful shared appointments bring together patients with the same chronic condition, such as diabetes or heart disease. For example, in a diabetes group visit, a doctor might ask everyone to remove their shoes so he can examine their feet for sores or signs of infection, among other things. A typical session lasts up to two hours. In addition to answering questions and examining patients, the doctor often leads a discussion, often assisted by a nurse.

Insurance typically covers a group appointment just as it would an individual appointment; there is no change in the co-pay amount. Insurers generally focus on the level of care provided rather than where it’s provided or how many people are in the room, Noffsinger says.

Some patients say there are advantages to the group setting. “Patients like the diversity of issues discussed,” Noffsinger says. “And they like getting 2 hours with their doctor.”

Patients sign an agreement promising not to disclose what they discuss at the meeting. Although some patients are initially hesitant about the approach, doctors say their shyness generally evaporates quickly.

“We tell people, ‘You don’t have to say anything,’ ” says Edward Shahady, medical director of the Diabetes Master Clinician Program at the Florida Academy of Family Physicians Foundation in Jacksonville. Shahady trains medical residents and physicians to conduct group visits with diabetes patients. “But give them 10 minutes, and they’re talking about their sex lives.”

Though group appointments may allow doctors to increase the number of patients they see and thereby boost their income, many doctors are uncomfortable with the concept, experts say, because they’re used to taking a more authoritative approach with patients rather than facilitating a discussion with them.

According to the American Academy of Family Physicians, 12.7 percent of family physicians conducted group visits in 2010, up from 5.7 percent in 2005.

Some studies have found that group visits can improve health outcomes. In an Italian trial that randomly assigned more than 800 Type 2 diabetes patients to either group or individual care, the group patients had lower blood glucose, blood pressure, cholesterol and BMI levels after four years than the patients receiving individual care.

Doctors say patients may learn more from each other than they do from physicians. “Patients really want to hear what others patients are experiencing, ” Shahady says.

Jake Padilla of Westminster, Colo., participated in his first group visit more than a decade ago, shortly after he had heart bypass surgery.

Padilla, now 67, continued to attend group appointments geared to primary-care patients’ concerns for years after that at the Kaiser Permanente outpatient clinic near his home. (Kaiser Health News is not affiliated with Kaiser Permanente.) He usually went once a month or so, and the members of the group constantly changed.

One woman who attended the group was 102 years old, he remembers. Fellow patients wanted to know how she managed to live that long. One of her secrets, she said, was deep breathing. Padilla has since used that advice when his blood pressure gets out of control.

But group visits aren’t for everyone. Padilla’s wife, Tedi, went to one meeting with him and never went back.

“She said she didn’t have time to sit there and listen to all those patients,” he says.

Cost and Quality Insuring Your Health

Group Appointments With Doctors: When Three Isn’t A Crowd