I hear more and more of my progressive friends arguing, in the context of deficit reduction, that we should be raising taxes before getting aggressive about reducing the cost of Medicare and Medicaid — as well as Social Security.

To a point, I agree.

This country is in such a hole that it is senseless to deny that at least some new taxes will be needed to pay for all of the nation’s bailouts and accumulated debts.

For instance, progressives would like to end the $1 trillion cost over ten years of the Bush tax cuts for those making more than $250,000 a year.

I also believe that ending those tax cuts is necessary.

But if you’re looking to better understand the budget policy choices we face, I highly recommend the March 2011 Congressional Budget Office study, “Reducing the Deficit: Spending and Revenue Options.” The CBO prices out about all of the budget options.

Here’s a chart from that study:

It says that federal revenue, as a percentage of gross domestic product , has averaged 18 percent since the 1970s — a level that sustained both economic growth and a big government pretty well. At least, until entitlement costs, for which health care is one of the main drivers, started to skyrocket.

If you believe that it is appropriate to pay what we now pay for health care in this country, then yes, we will need lots more taxes. But, on the other hand, why would you raise taxes to pay for something everybody says has a cost that is unnecessarily sky-high? Wouldn’t the solution be to fix the cost problem?

Raising taxes is not going to solve the problem of out-of-control entitlement costs. Even huge tax increases on the rich won’t get the job done.

After the 1990s combination of the hot economy and President Bill Clinton’s tax increase, federal revenue as a percentage of GDP rose to about 21 percent — high by historic standards. Then the policies of President George W. Bush came along and dropped that share to about 16 percent — low by historic standards, and arguably either boosting the economy or helping to create the economic bubble and big deficits. The Great Recession then further pushed federal revenue to a modern-era low — about 15 percent.
According to the CBO, federal revenue will again rise to the Clinton-era level of about 21 percent of GDP — but that is when the two-year extension of the Bush tax cuts expires for everybody.

To keep federal revenue at the apparently reasonable historic level of about 18 percent of GDP, we probably do have to give back at least some of those Bush tax cuts — but it should not be necessary to end the Bush reductions that benefitted the middle class. And, we should also expect that some part of this revenue shortfall would be solved when the economy gets back on track.

If all of these steps were taken, it appears that we would be on the way to striking the right balance.

But, for those who think the deficit problem can be solved by just taxing the rich, let me point out another piece of startling information backed up by the CBO’s study of policy choices. Replacing the 10-year, $1 trillion Bush tax cut for those people making more than $250,000 a year with a combination of lower income and capital gains taxes would still be worth $1 trillion! As the CBO options paper points out, that works out to an average of about $100 billion a year during each of the next 10 years.

That is a lot of money — but not compared to the 2011 deficit that is estimated to be $1.6 trillion. Or the many $1 trillion deficits still to come.

Even if we were to raise the top rate to 45 precent for people making at least $1 million a year, and 49 percent on incomes of $1 billion, we would raise only $900 billion over the next decade, according to Citizens for Tax Justice — again only a small part of the projected deficits.

So, raising taxes on rich people, by itself, hardly makes a dent.

What is making a dent — really a fiscal train wreck — is the out-of-control cost of our entitlements, particularly the health care entitlements.

Here is another chart based upon CBO numbers (that appeared in the recent Ryan Budget proposal: 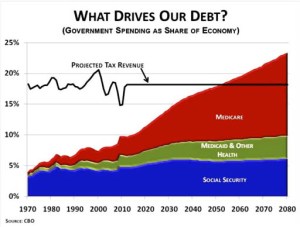 This chart shows the impact the entitlements — particularly Medicare — will have on the federal budget if federal revenue were to hold at the historic level of about 18 percent of GDP. Anything above the black line is a deficit.

Now, remember, this is just entitlement spending. The rest of the federal budget — interest on the debt, defense spending and every other department and agency would have to get loaded on top of this mountain!

Folks, we can’t tax our way out of this mess.

There aren’t enough rich people to do it.

There Aren’t Enough Rich People To Pay For Medicare And Medicaid! — Guest Opinion