AUSTIN, Texas — Tim Shea is counting the days until he can move into a new, 3D-printed house. Shea, 69, will be the first to live in one of six such rentals created by what some in the housing industry call a futuristic approach that could revolutionize home construction.

Shea is among a growing number of seniors in America who have struggled to keep affordable housing. He has, at times, been homeless. He has arthritis and manages to get around with the aid of a walker. He said he looks forward to giving up the steep ramp he’s had to negotiate when entering or exiting the RV he’s called home.

“I’m over the top about it,” said Shea, a native of Stratford, Connecticut, who made his way to Austin in 1993. “They had an interview process where a bunch of people applied. Then I found out it was a 3D-printed home, and I was gung-ho.”

The promise of 3D printing has others excited, too. 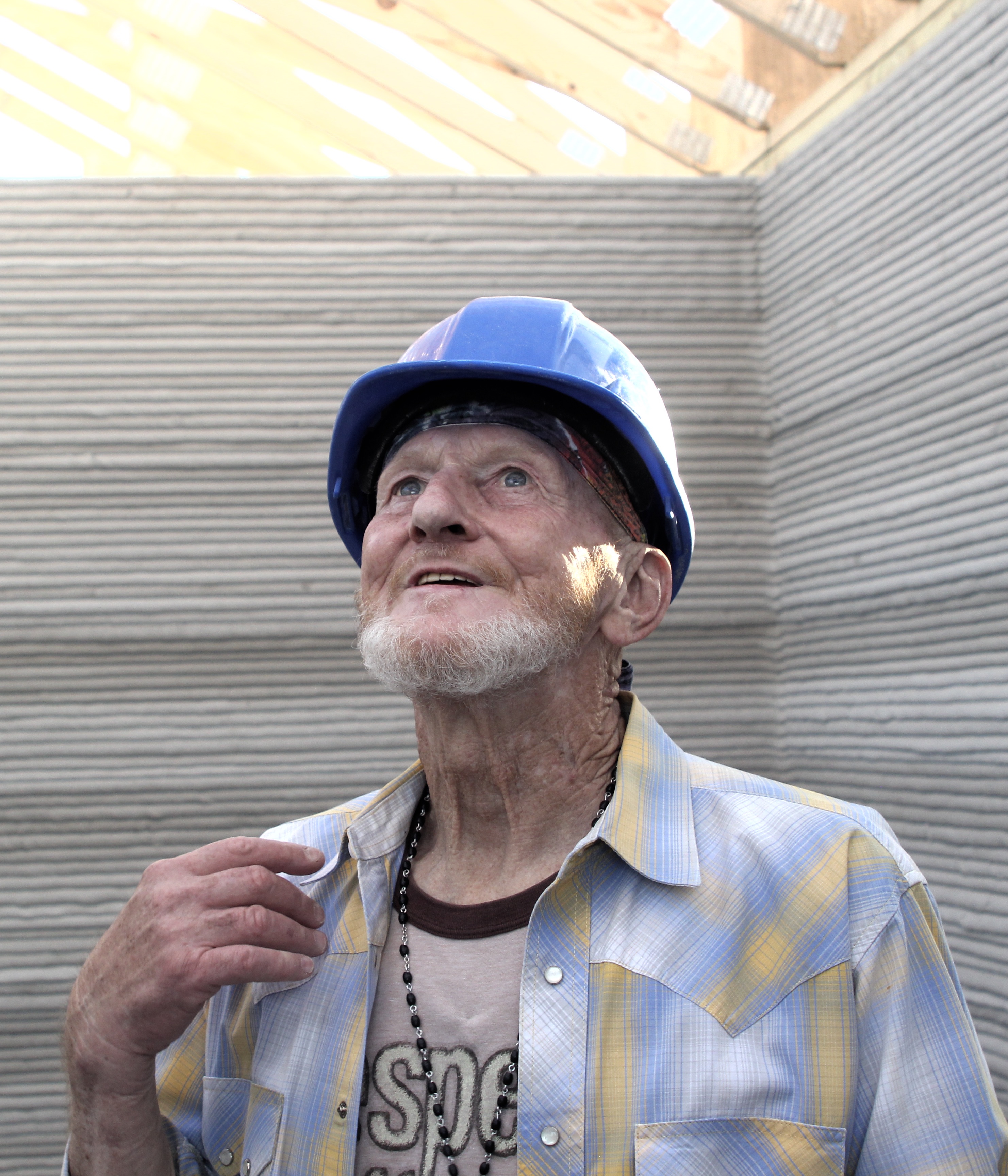 Tim Shea, formerly homeless, will be among the first people in the U.S. to live in a 3D-printed house. This spring, Shea plans to move into the 400-square-foot, 3D-printed home by Icon at Community First Village in Austin.(Courtesy of ICON)

In a Northeast Austin neighborhood, these homes are taking their distinctive shape on the grounds of Community First Village, where about 180 formerly homeless people have found shelter and camaraderie in the most expensive city in the state. The 51-acre development (which will eventually include more than 500 homes) provides affordable permanent housing, including the 3D variety.

In this city of disruptors, Austin-based construction technology company Icon has formed a variety of partnerships to explore how 3D-printed homes could not only provide housing for people on the margins but also demonstrate how to dramatically reduce the time and money spent on construction.

“I see this innovative idea as being a powerful piece of the puzzle, along with other ideas of what it’s going to take to have more affordably built houses,” said Alan Graham, a real estate developer turned founder of the nonprofit Mobile Loaves & Fishes, which opened the village in 2016. The average age of residents is 55, he said.

These 400-square-foot houses are the nation’s first 3D-printed residences, according to Icon. Its process — which incorporates an 11-foot-tall printer that weighs 3,800 pounds — relies on robotics. Beads of a pliable concrete material dubbed Lavacrete ooze from the behemoth printer in ripples that stack and harden into a wall with curved corners.

The idea is to cut the time and as much as half the cost associated with traditional construction, limit the environmental footprint and trim the number of workers on crews, said Jason Ballard, Icon’s co-founder and CEO.

The process, he added, also could allow more design freedom.

“Because 3D printing uses slopes and curves, in the future new design languages will emerge that are only accessible through 3D printing,” Ballard said.

Icon has generated interest from the federal government, including NASA and the Defense Department, whose Defense Innovation Unit is focused on strengthening national security with new commercial technology. The unit (which has an Austin office) is under contract with Icon to train Marines and develop prototype structures that can be built quickly for military and humanitarian purposes. In late January, about a dozen Marines trained for a week at Icon. Further training is planned this year at Camp Pendleton in California.

“Innovation is key to solving our affordable housing crisis,” Carson said in an email. “The work that companies like Icon are doing could have a huge impact on housing affordability in communities across the country.”

Such a move is overdue, according to the Harvard Joint Center for Housing Studies. The center in October issued a study that illustrated a growing income disparity among older Americans.

The federal government considers housing affordable when a resident can spend 30% or less of income on it. Those who spend more, according to the Harvard study, are “cost burdened.”

“While many households now of retirement age have the means to age in place or move to other suitable housing, a record number are cost burdened and will have few affordable housing options as they age,” the analysis said. “In addition, many older renters are less well positioned than homeowners because they have lower cash savings and wealth.”

Moreover, the study said homelessness among older adults is increasing. The share of people age 50 and older experiencing homelessness rose to 33.8% in 2017 from 22.9% in 2007. Those statistics, according to the study, suggest that the “need for affordable, accessible housing and in-home supportive services is therefore set to soar.”

Such housing insecurity can affect a person’s health and well-being. “Financial pressures can also lead to depression and other physical problems,” the study said.

Not everyone is convinced 3D is the answer for the masses.

“Basically, 3D printing is creating a wall system,” said Chris Herbert, the Harvard center’s managing director. “It still has to have a foundation. Someone needs to put on a roof. It’s another way to lower the labor cost of producing components of the house, but it’s not printing every piece of the house.”

“If you can show me how 3D printing can produce components that can be stacked with multiple rooms and dimensions, that would have wider applicability for the overall housing stock,” he added.

Architecture professor Ryan Smith, director of the School of Design and Construction at Washington State University, said he agrees it’s early days for the technology.

“It’s worth investment and work on research in the industry, but I don’t see how it’s going to work in the current supply chain and labor market,” he said. “I personally still feel it will be 30 to 40 years before it will be having an impact.”

But architect and 3D advocate Alvin Huang, an associate professor at the USC School of Architecture in Los Angeles, said 3D’s advantages “are about precision and customization.”

“Its actual benefit is in larger projects that have a high deal of customization,” he said. “More and more construction sites will become more and more like factory settings, and instead of laborers, you’re looking at technicians. I’m a very big proponent of thinking about how the 3D printer can change the way we design.”

Brett Hagler is co-founder of New Story, a San Francisco-based social housing nonprofit to end global homelessness. His group and Icon are working on the world’s first 3D-printed community of 50 houses, under construction in Tabasco, Mexico. New Story and Icon partnered to create the first 3D-printed structure in East Austin that debuted in March 2018 at the annual South by Southwest festival. That building, now an office, served as a prototype for the 3D-printed homes at Community First.

“With one type of technology, you essentially get a lower-cost home — the exact percent in price is TBD. Two, it’s faster. Three, it’s very exciting to us because you get a much better custom design based on a family’s need,” he said. “What I do believe is that it has a very real chance to usher in a quantum leap in how we build shelter.” 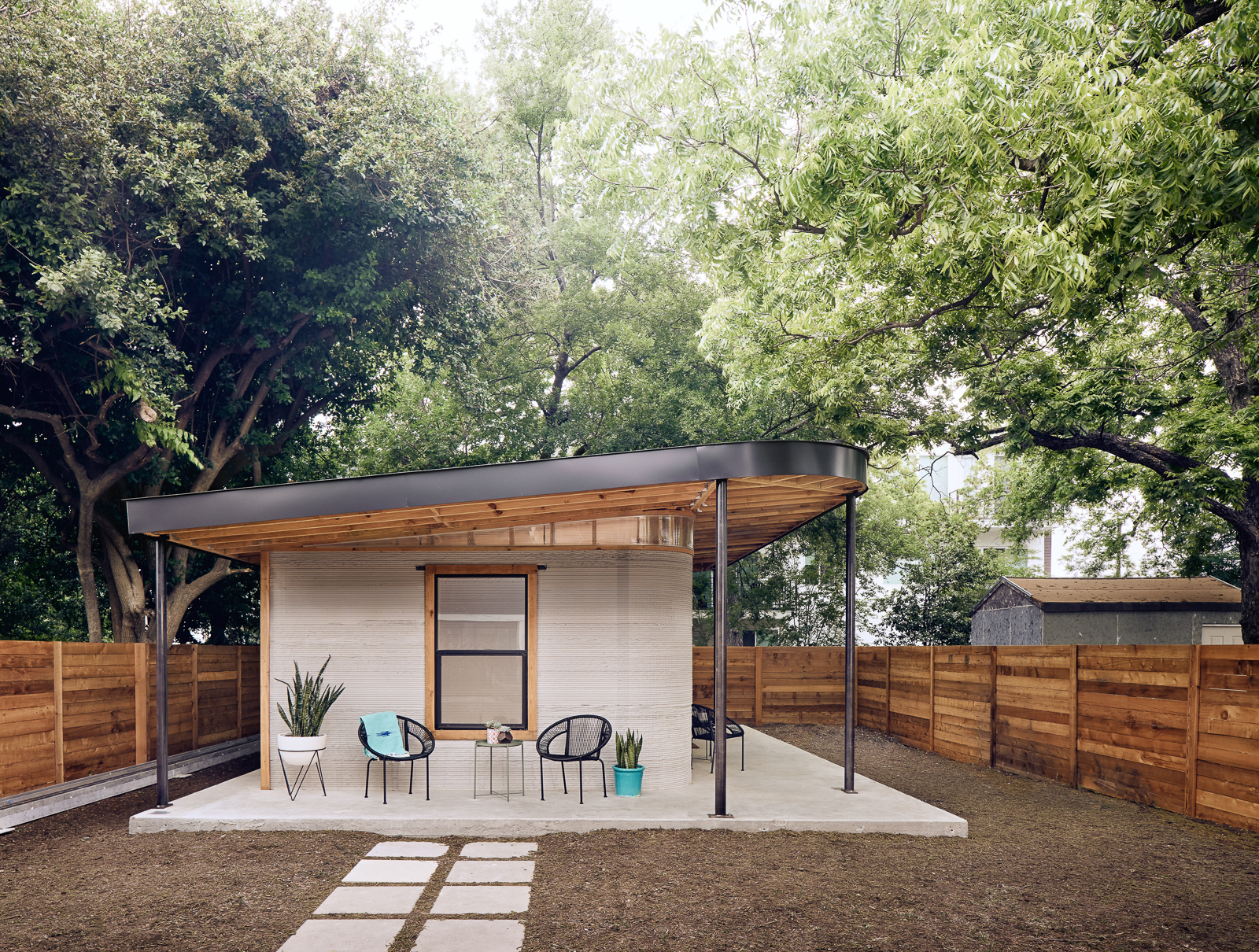 The first permitted, 3D-printed structure in the U.S. was created by Icon in East Austin and debuted in March 2018 at the annual South By Southwest festival. The building served as a prototype for the 3D-printed homes at Community First.(Credit: Casey Dunn)

Hagler said he’s confident the technology will be developed to affect more than just the current single-story detached house and provide solutions to large-scale projects.

At Community First, residents pay monthly rents ranging from $220 to $430 and can earn wages by working on-site. The six new houses that will rent for $430 were created by the second-generation 3D printer called Vulcan II, which last year printed the village’s welcome center.

Shea has come a long way from Ohio, when he was married and lived with his wife and two kids in a house he bought in 1971. He was married 12 years, he said, “until I struck out on my own.”

“We were comfortable,” he said, explaining that he had attended Ohio State University but didn’t graduate and then worked at several jobs in Ohio and Austin until poor health caught up with him and forced him onto the streets. He lives on a modest fixed income of disability and Social Security payments.

“I had never been homeless before I got in bad shape physically. I didn’t feel equipped for it and didn’t handle it very well,” he said. “Some people I’ve met here have been in and out of homelessness all their life. It’s a shock to your system. All I could do was hide. I was embarrassed.”

“I feel like it’s going to help people in every situation in life,” he said. “It’s one of the most innovative steps — not just for the homeless — but for affordable housing. It’s pretty amazing.”

Around The Corner: 3D Housing Designed For The Homeless And Needy Seniors