Legendary crooner Pat Boone, the national spokesman for 60 Plus Association, a self-described conservative seniors group, announced in early May that GOP congressional candidate Jane Corwin had won the group’s “Honorary Guardian of Seniors’ Rights” award. She could be counted on, he said, “to protect Social Security and Medicare while also working to reduce the federal budget deficit.”

Corwin, who was running for an open House seat in western New York, received the award at a recent campaign appearance at a nursing home with Jim Martin, the chairman of 60 Plus.

?But if 60 Plus’ goal was to inoculate Corwin from attacks on the Medicare issue, the effort failed badly. Corwin was beaten soundly by Democratic opponent Kathy Hochul, partly because of voter fears about House Budget Committee Chairman Paul Ryan’s proposal to sharply transform Medicare.

That raises questions about whether 60 Plus, a 19-year-old organization that over the last year has become increasingly active in pushing Republican candidates and causes, will be effective in next year’s elections. The Alexandria, Va.- based group —  which says it’s a nonpartisan advocate for “free enterprise, less government, less taxes” and an alternative to the AARP  staunchly backs the Ryan plan. The proposal, said Martin in an e-mail, is a first step “to save Medicare for future retirees because clearly the status quo is leading Medicare down the road to ruin, not the path to prosperity.”

He says 60 Plus didn’t fail in the case of Corwin. “Our efforts worked, but it was too little too late,” he wrote. “The candidate herself admitted that the charge that she was wrecking Medicare went unanswered too long.”

For years, 60 Plus played a low-key role in elections, but that changed last year, when the group spent $7 million on ads to help Republicans in tossup races, according to Federal Election Commission records. The ads denounced Democrats for backing $500 billion in Medicare cuts over 10 years in the health care law and portrayed Republicans as the protectors of seniors. Almost all the Republican candidates won. The group reportedly spent another $800,000 in April in a series of “thank you” broadcast ads for 39 Republicans who voted for the Ryan proposal. 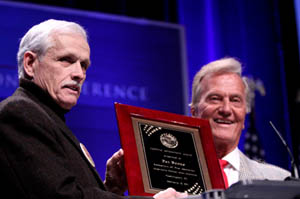 Television host Pat Boone is presented the ‘Lifetime Achievement Award’ by Jim Martin of the 60 Plus Association, at CPAC 2011 in Washington, D.C., in February. (Photo by Gage Skidmore via Flickr)

But the controversy surrounding the Ryan plan could complicate 60 Plus’ efforts to promote GOP candidates and provide cover to House Republicans who voted for the proposal. Democratic pollster Celinda Lake, president of Lake Research Partners, says the group could have a harder time selling a positive message about Ryan than it did attacking the health law.  “It’s always easier to tear something down than to build something up,” she said. “Now the tables are turned. We get to say, ‘Don’t be fooled. This is what it really does.'”

For next year’s elections, Republicans are hoping to consolidate and expand their gains with seniors, always one of the most important voting blocs. In the 2010 election, people over 60 voted Republican by the largest margin since the early 1980s, according to Robert Blendon, professor of health policy and political analysis at Harvard. Exit polls showed that seniors favored Republicans by 21 percentage points, Lake said.

The fight leading up to 2012 will focus intensively on the Ryan plan, which would raise the eligibility age of Medicare to 67 and convert it from a traditional fee-for-service system, under which most seniors get health care, to one in which seniors get a set amount of money to buy private health insurance. Polls show that the public, including seniors, generally oppose cutting the growth of spending on Medicare payments to balance the budget.

The changes wouldn’t apply to those now 55 and older, but everyone else would pay more once they become eligible, according to the Congressional Budget Office. Ryan would also keep the $500 billion in Medicare savings that were included in the health law, a point that Democrats have seized on to argue that Republicans and 60 Plus are hypocritical for criticizing the cuts in the health care law. Since the House passed Ryan’s budget, the GOP’s lead with grey America has narrowed to 10 percentage points.

“60 Plus will be a pretty big player in helping to defend Republican freshmen,” said Doug Thornell, a Democratic strategist and former spokesman for the Democratic Congressional Campaign Committee. “Republicans are realizing their vote to end Medicare as we know it will be very problematic for the party so they will have to figure out how to defend it and GOP strategists will dispatch 60 Plus to do a lot of their dirty work.”

Republicans say 60 Plus, launched with help from direct-mail veteran Richard Viguerie, is a welcome political ally that will continue to come up with effective ways to push its agenda. Martin, they say, has proved himself to be a savvy public-relations operative.

“Jim Martin would give away awards to members of Congress [and then the] member of Congress would say he was endorsed by a major seniors association,” said Rob Hartwell, president of the lobbying firm Hartwell Capitol Consulting and a former consultant to 60 Plus.

The group has only two lobbyists, rarely testifies at hearings and isn’t a key source of policy advice, say congressional staffers. Still, aides say, 60 Plus is adept at getting attention at town hall meetings, sending letters and making phone calls on issues key to seniors.

“They’ve always been good at turning folks out for press conferences and things like that,” said Kyle Downey, spokesman for the Senate Republican Policy Committee.

The organization is also helpful in disseminating Republican messages, the staffers say. The April ads that thanked House members for voting for the Ryan budget praised them for backing a plan that “protects and preserves Medicare for years to come.”  A radio ad that ran on behalf of Arizona Republican Rep. Paul Gosar, for example, said, “Elected officials actually did what they promised they would.”

The source of 60 Plus’s recent largesse is unclear. Martin told Kaiser Health News that his group has 300,000 “voluntary” members, none of whom pay dues. The group has been in the red most years since 2003, according to Internal Revenue Service documents. In mid-2009, 60 Plus reported that its assets were a negative $713,271 on revenue of $1.82 million.

The group’s big increase in campaign spending last fall came in the wake of a January 2010 Supreme Court decision that held corporations and unions could anonymously spend unlimited amounts of money on elections. Martin said that his group gets donations from corporations and individuals but declined to name them.

Robert Blendon, policy and political analyst at Harvard University, notes that money going to seniors’ organizations isn’t necessarily coming from groups that have a special interest in senior issues.

Blendon worries about anonymous contributions which, he said, allows companies that want to elect a candidate “to go to a broker of sorts, who directs money to groups like 60 Plus.” He added, “It is possible that contributions to groups are unrelated to the group’s mission. The only connection could be that the organization wants to elect members of the same party as does the donor.”

Rep. Ron Kind, D-Wis., who survived 60 Plus attacks in the 2010 election, suspects that the group’s effort was part of a coordinated strategy to ensure a stream of negative ads. “It had to have been coordinated,” he said. “One ad buy from one group ended, and another picked up immediately. I wouldn’t be surprised if the Koch brothers were financing 60 Plus.”

Martin joined Americans for Prosperity, a conservative think tank founded by David Koch, the CEO of oil and gas conglomerate Koch Industries, for several events in 2010. A Koch spokesperson didn’t return a request for comment.

In the end, Lake said, 60 Plus’ influence will depend on how much money it spends next year and whether it encourages others to spend on similar issues. In 2010, she said the group’s $7 million in spending was part of a much bigger drive by several organizations  that spent a combined total of $55 million  to attack the health law’s Medicare provisions.

By Marilyn Werber Serafini and Bara Vaida May 25, 2011