By Melissa Bailey Photos by Kayana Szymczak May 28, 2019

Anne Brescia sat beside her only child, Anthony, as he lay unconscious in a hospital bed at age 16. Just a few months before, he was competing in a swim meet; now cancer was destroying his brain. Brescia couldn’t save her son. But she was determined to bring him home.

Anthony Gabriel Brescia-Connell was not conscious for his voyage from Boston Children’s Hospital to his home in Medford, Mass., where he died on March 3, 2011, surrounded by his family and beloved stuffed animals. He may not have heard the parting blessings before a doctor turned off his portable ventilator and let him die naturally.

But having the choice to take Anthony home, away from the beeping hospital monitors, “meant the world to me,” his mother said.

Anthony’s journey was made possible through swift and unconventional efforts by the hospital staff, including a critical care transport team accustomed to rushing kids to the hospital to save their lives, not taking them home to die.

The experience galvanized Harriett Nelson, a nurse on that team who helped arrange the trip. It inspired her to conduct pioneering research on and advocate for “pediatric palliative transport” — a rare but growing practice that aims to give families choice, control and comfort at the end of life.

Palliative transport lets families move critically ill children from the hospital intensive care unit to their home or hospice, with the expectation they will die within minutes to days after removing life support.

It means “having parents go through the hardest thing they’ll ever know — in the way they want to do it,” Nelson said. Boston Children’s has sent 19 children to home or hospice through palliative transport since 2007, she said.

These final journeys — also offered by Mayo Clinic, Children’s Hospital of Philadelphia and Kentucky Children’s Hospital — can involve elaborate planning, delicate transfers and even long helicopter rides. In some cases, families took a child far from home for a last-ditch effort to save their lives.

At Mayo Clinic in Rochester, Minn., palliative transport has helped culturally diverse families carry out end-of-life wishes for their dying children. In one case, a newborn girl rode 400 miles by ambulance to return to her Amish community, where she was extubated and died in her parents’ arms, in the company of her 11 siblings. In another, an 8-month-old Native American girl traveled 600 miles by air and ground ambulance to her rural tribal reservation, where she could participate in end-of-life rituals that could not be done in the hospital.

These trips, which can cost thousands of dollars, are typically offered free to families, paid for by hospitals or charities. Most children are taken home, where they transition to receiving care from hospice staff. Some go instead to hospice facilities.

Dr. Megan Thorvilson, a pediatrician and palliative care specialist at Mayo Clinic, said palliative transport aims to address a gap between families’ preference and reality. Most parents of terminally ill children would prefer that their child die at home, but most of these children die in the hospital, most commonly in the intensive care unit. Most pediatric ICU deaths happen in a controlled way, following the removal of life support, she noted. That means there may be time to move the child to an alternative location to honor a family’s wishes. 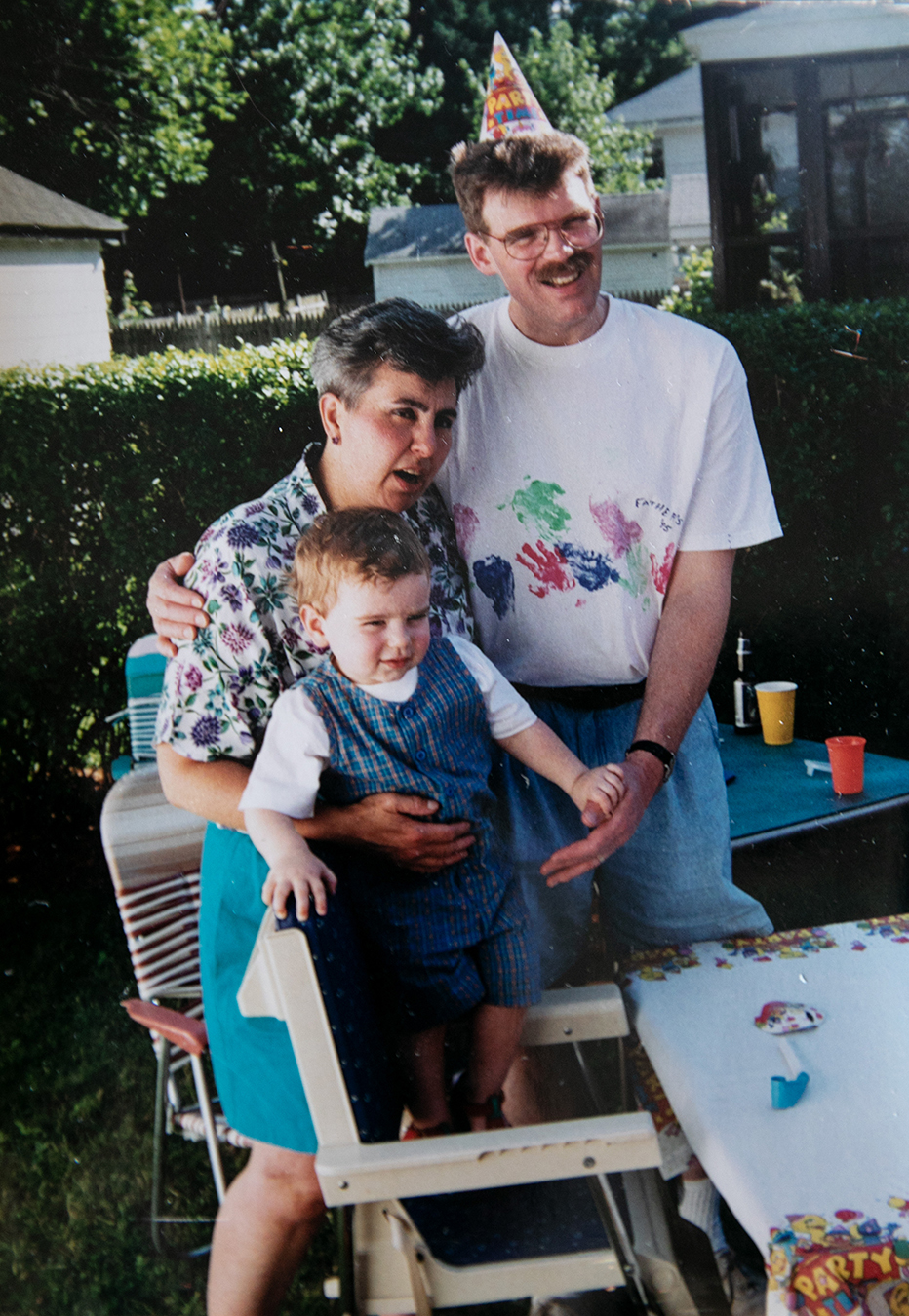 A family photo shows Anthony with his mother and his father, Brian Connell.(Kayana Szymczak for KHN)

Transporting children on life support is risky. At a palliative care conference, a nurse from Children’s Hospital of Philadelphia described the difficulties staff faced in trying to fly a 10-year-old girl home to Michigan. After she was rolled on her side several times to be transferred between vehicles, the child died before the plane could take off.

And dying at home is not what every family wants.

“We do sometimes overly romanticize the death at home,” Thorvilson acknowledged. Some parents would much rather have a child die in the hospital, with familiar nurses at the bedside for medical and emotional support. Some would rather keep this traumatic experience away from where they live.

Brescia, however, said she couldn’t bear to return home without her son.

Brescia, a biologist who used to run an electron microscopy lab, wasn’t sure if she and her husband, Brian Connell, would ever have kids. Fertility treatments didn’t work. But on June 23, 1994, seven days before Brescia turned 44, she gave birth to a baby boy.

“Anthony is the love of my life,” said Brescia, who is now 68. “The OB-GYN put him on my chest and I really thought that my heart was going to burst.”

The mother-son bond was especially close: Brescia home-schooled her son for most of his life. Anthony grew to be 6 feet tall, full of curiosity. He loved identifying mushrooms, studied Arabic and oceanography, and aspired to go to MIT. He was an avid swimmer, competing on a team in Belmont, Mass. 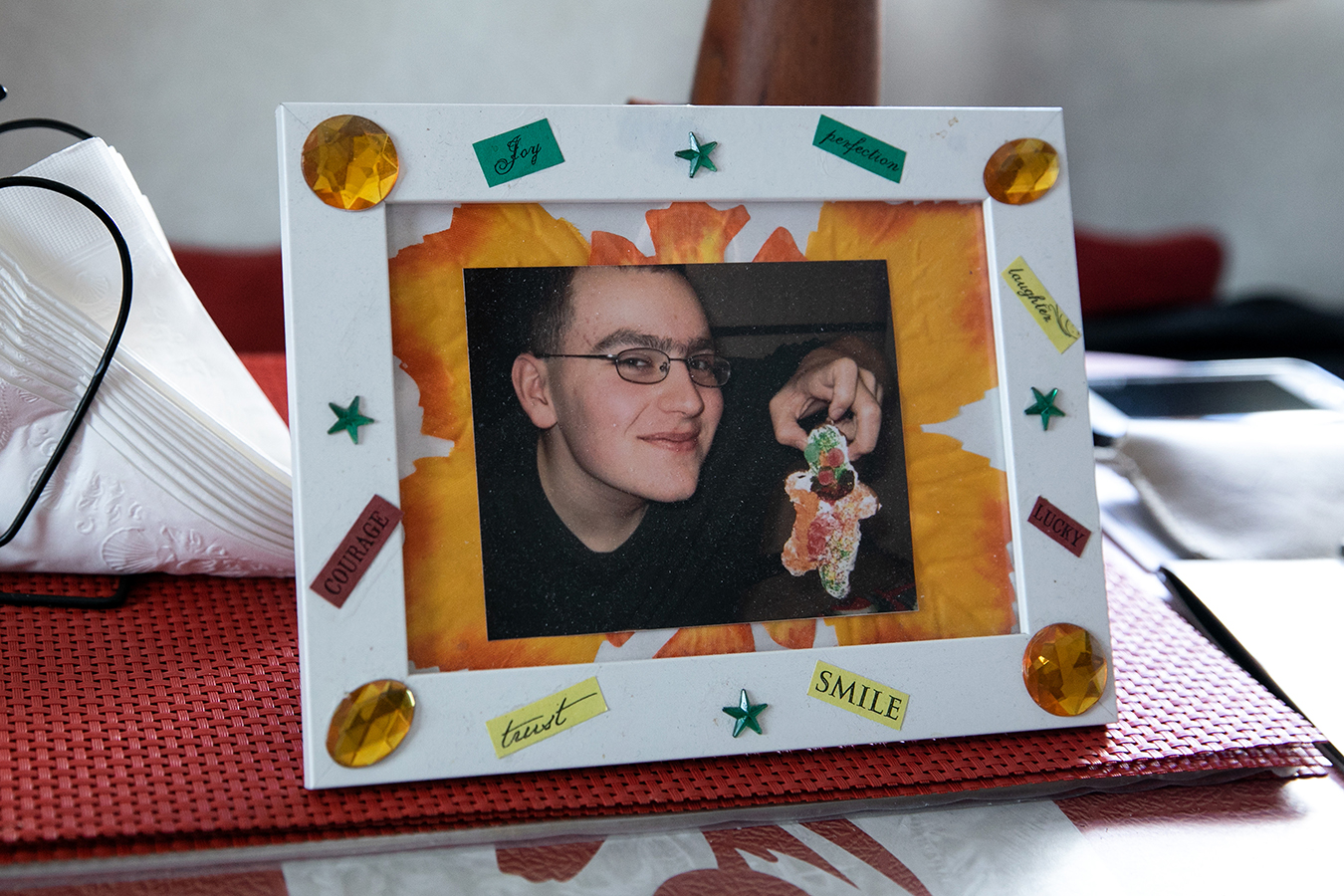 Anthony was diagnosed with a brain tumor in December 2010.(Kayana Szymczak for KHN)

One day in late 2010, while racing the backstroke, he became disoriented in the pool and was disqualified.

A neurologist prescribed rest. But over the next two weeks, Anthony grew only more tired and began to lose his balance. On Dec. 20, he was taken to Boston Children’s Hospital and diagnosed with a brain tumor.

The disease “came out of nowhere,” Brescia recalled. “He went from looking incredibly healthy and swimming like a healthy kid” to living at the hospital. At his bedside, she told him she’d bring him home to celebrate Christmas and eat stuffed shells.

His condition deteriorated very quickly. The tumor could not be surgically removed. Anthony pushed through radiation and chemotherapy with the hope of going home, but the treatments failed. By late February 2011, the tumor began pressing on his brain stem, and fluid was building up in his brain.

Anthony was unconscious, relying on a ventilator to breathe. Brescia connected with the hospital’s palliative care team.

“I want to bring him home tomorrow,” Brescia told the staff.

“I was scared to death he was going to have another incident,” she recalled. “I didn’t want them to do any more invasive procedures to reduce the pressure on his brain.”

Staff from the ICU, palliative care and transport teams scrambled to honor her request. The critical care transport team arranged for the use of its ambulance, a mobile ICU the size of a small bus.

The night before the trip, Brescia said goodbye in the privacy of Anthony’s hospital room. 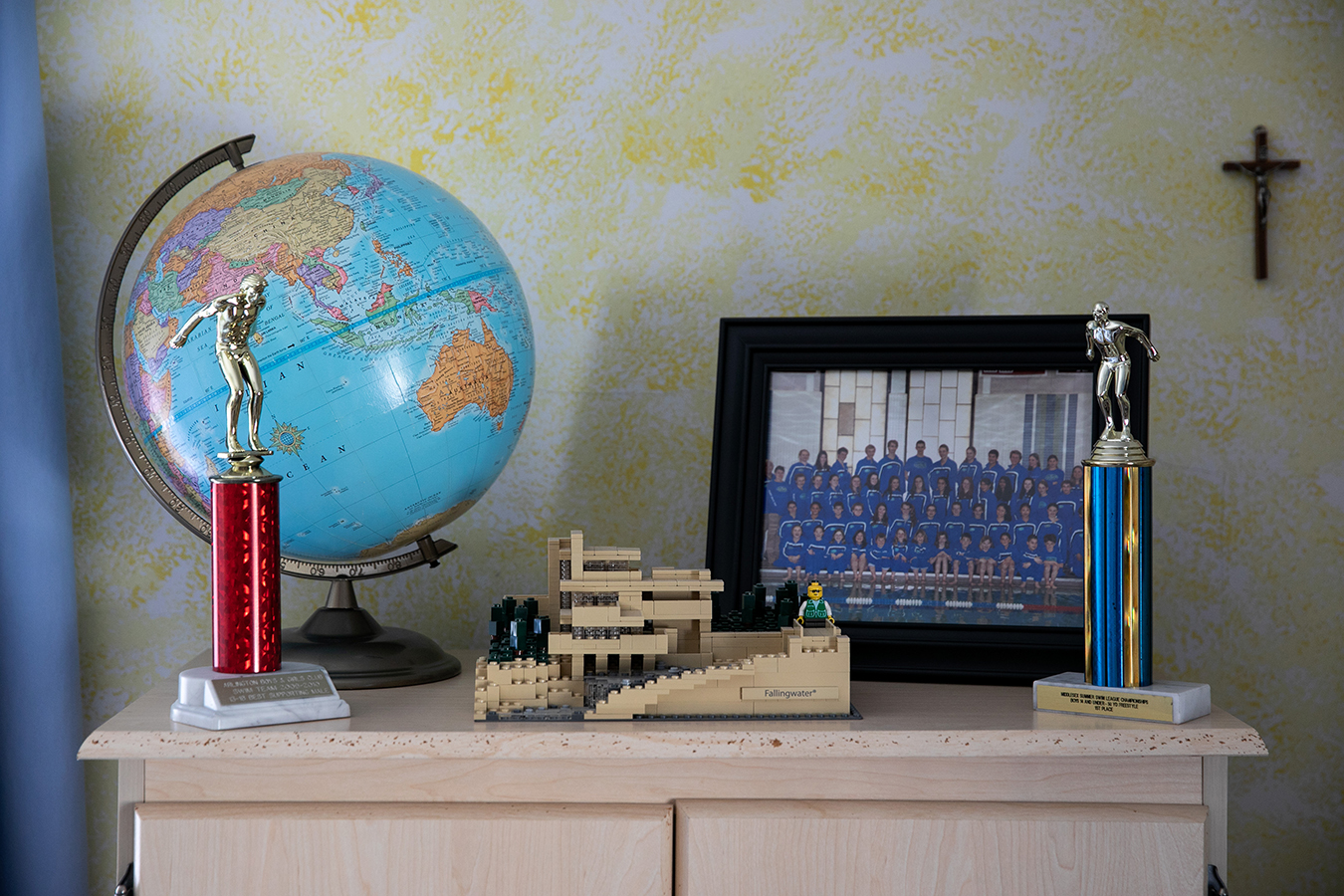 Anthony was an avid swimmer, competing on a team in Belmont, Mass.(Kayana Szymczak for KHN)

On March 3, 2011, Brescia and her husband boarded the bus along with Anthony, a chaplain, two doctors, Nelson and a nurse from the ICU. They rode 10 miles to the family’s home, where Anthony was laid on a hospital bed in his living room, surrounded by his stuffed animals, on his favorite flannel sheets.

A pastor held a service for Anthony, and close family gathered to say goodbye. Then Brescia signaled for a doctor to disconnect the ventilator.

Anthony seemed to be at peace, Brescia said. After he died, she climbed into the bed with her son and held onto him for a while.

The death was still traumatic. But “it was really a gift to bring him home,” she said. “It was a significant act of compassion and kindness and love on the part of the Children’s staff.” 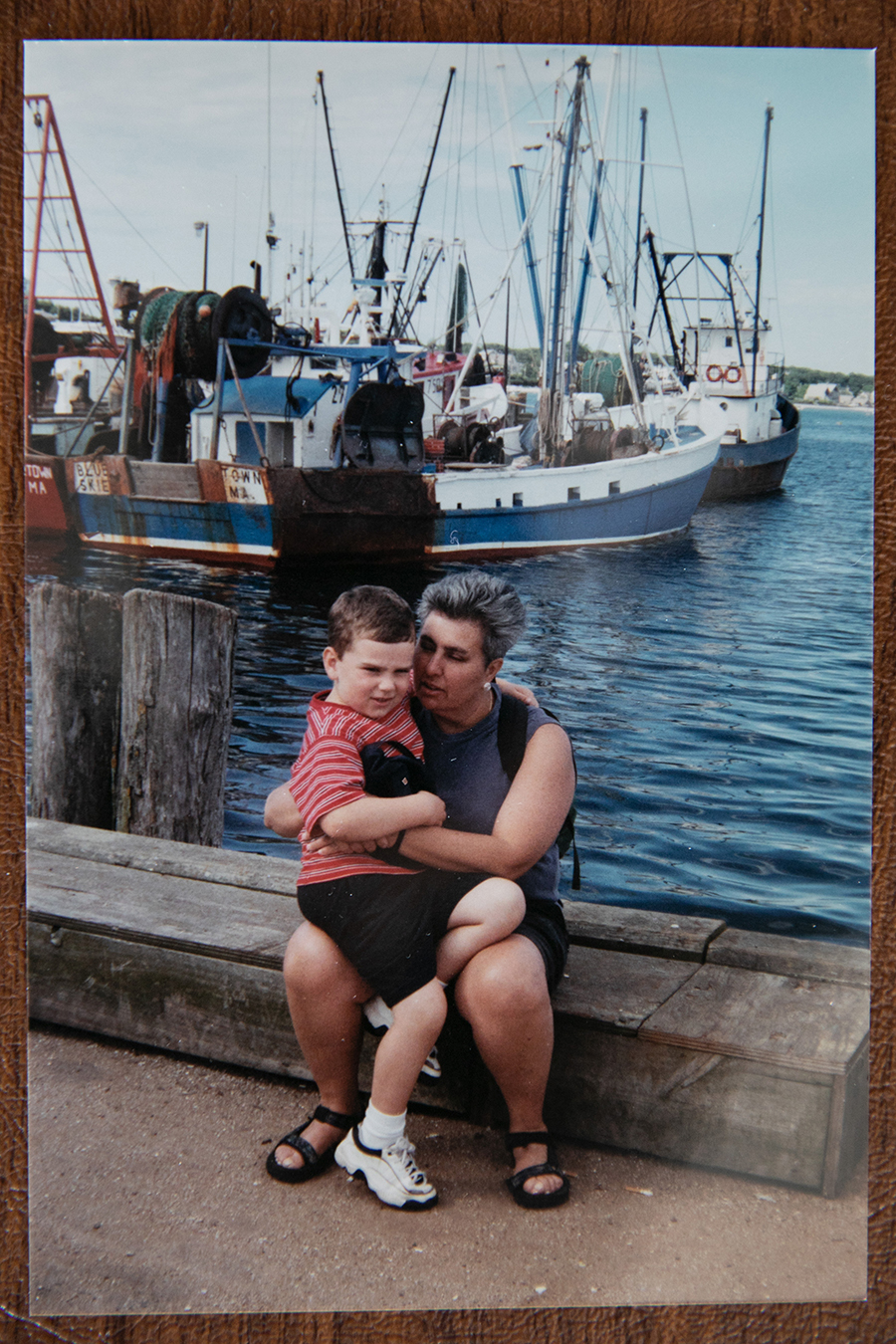 Anthony and his mother were extremely close. “Anthony is the love of my life,” Brescia says.(Kayana Szymczak for KHN)

After Brescia’s experience, Nelson was inspired to offer the choice to more families. First, she interviewed Brescia and other parents about whether palliative transport had had a positive impact. All nine parents said it had. One family described holding a celebration when they brought their newborn baby home, even though he was about to die. They took family photos and used the nursery they had set up, establishing a brief sense of normalcy for four days before he died.

In her 14 years on Boston Children’s critical transport team, Nelson has found that parents benefit from palliative transport for various reasons: At home, they’re away from the noise of the hospital. They have control over who can visit. They feel more comfortable. And they don’t feel rushed after their child dies.

Nelson created a protocol that allows the hospital to offer palliative transport in a more routine way. Now, when children come to any of the hospital’s four ICUs, Nelson said, “we have the power to say, ‘You have a choice when it comes to the end of life.'”

The practice appears to be spreading.

After Dr. Lindsay Ragsdale, director of the palliative care team at Kentucky Children’s Hospital in Lexington, presented her protocol for palliative transport at a conference last year, staff from 20 hospitals asked her to share her checklist, she said.

Mayo’s Thorvilson, who has worked closely on a half-dozen palliative transports, said it’s possible these last-minute trips from ICU to home could be avoided by earlier referrals to hospice, which might get kids home sooner. But when children with complex illnesses get sick, she said, “sometimes it’s hard to know whether this is just another bump in the road, or whether this is the natural end of the child’s life.”

“There’s something really unique about a child dying,” she said. “Everyone’s heart breaks, and we want to be able to do all that we can to be able to support the family in the midst of the tragedy.”

Eight years after Anthony’s death, his bedroom remains untouched, his socks still folded in his top drawer, swimming trophies on the cabinet, slippers under his chair. Pictures of him adorn every room in the house — on the fridge, the kitchen table, the living room stereo.

Looking through photos one recent morning of her son fishing and blowing out birthday candles, Brescia struggled to hold back tears.

“I couldn’t cure him,” she said. “I failed to protect him from a tumor — that’s how you feel. They did all they could. It wasn’t enough. Bringing him home was the best I could do.”

By Melissa Bailey Photos by Kayana Szymczak May 28, 2019