Flying out of Reagan National Airport on Wednesday, I was expecting a short reprieve from the issue that has consumed my work in health journalism for eight years — the Affordable Care Act and, lately, Republican efforts to replace it.

The voyage turned into anything but, with some unexpected close encounters. 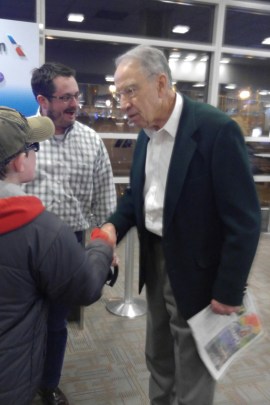 Media-accessible Sen. Chuck Grassley (R-Iowa) keeps his pulse on the news and stays in touch with the public at Reagan National Airport outside Washington, D.C., on March 15. (Phil Galewitz/KHN)((Phil Galewitz/KHN))

Awaiting my flight and in search of any outlet to plug in my phone, I recognized Sen. Chuck Grassley heading back to his home state of Iowa. Always one of the more media-accessible senators, he didn’t hesitate to chat when my reporter’s instincts kicked in to curbside him with some questions on the ACA repeal. It was Grassley who initially helped turn public tide against Obamacare when he (wrongly) claimed the legislation had “death panels.”

Grassley, 83, chairman of the Senate Judiciary Committee and one of longest-serving members of Congress, told me the GOP leadership bill — the American Health Care Act — doesn’t go far enough to help older Americans, those ages 55-64, get coverage. He said a plan is circulating in the Senate to extend more government subsidies to help this age group, which a recent report by the non-partisan Congressional Budget Office (CBO) noted would be hit particularly hard.

But, reflecting Republican divisions, he acknowledged that subsidies — even if directed at low-income baby boomers — would be tricky given opposition from conservatives such as House Freedom Caucus Chairman Mark Meadows (R-N.C.). Much of the party’s hard right is opposed to subsidies, including former presidential candidate Ted Cruz.

Then Grassley moved on to two points on which his party is united. He said the Republicans must deal with Obamacare before it adjourns for Easter/Passover recess on April 6. That’s because Republicans still must leave time to deal with tax reform and infrastructure bill before summer break. “It’s now or never,” he said.

I asked if he would support any GOP bill, even if it increased cost for some Americans or led to more joining the ranks of uninsured. Grassley grew a bit angry. “Anything is better than Obamacare and what we have now,” he said with his outstretched fingers nearly touching me.

This is a common but increasingly contentious talking point in GOP circles. The CBO report found that 24 million more Americans would lose coverage under the GOP plan by 2026.

No sooner had I shaken hands with the senator and boarded my American Airlines flight to South Florida, I spotted none other than Sen. Ted Cruz, himself, the conservative fireball from Texas, sitting in the row ahead of me. I watched the flight crew comp his glass of red wine — I paid $7 for my Sam Adams beer — and hesitated to disturb him in flight as he played a basketball-themed game on his tablet.

But once landed, I couldn’t resist introducing myself as a reporter. I told him I had just read his op-ed in The Wall Street Journal explaining his own opposition to the GOP leadership plan, and the need to freeze Medicaid expansion immediately rather than by 2020 and provide tax credits only for working Americans to help them get health coverage. 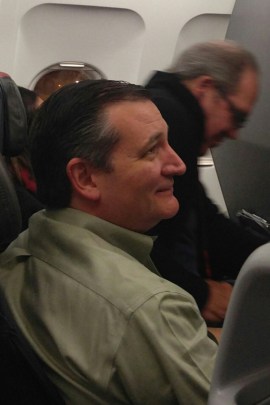 As we deplaned in West Palm Beach, Cruz told me that he didn’t think Medicaid should help non-disabled adults because it would give them an incentive not to work and would make them dependent on government handouts. He said Medicaid was meant to help children, pregnant women and the disabled — and money spent to help others would take away from those who were more deserving.

He noted that states that expanded Medicaid have long waits for care for disabled Medicaid beneficiaries needing home and community-based care. I cover Medicaid and felt compelled to point out that the longest Medicaid waiting lists were in states that did not expand Medicaid.

Cruz, 46, mentioned that he wants the federal government to offer straight lump-sum grants to states for Medicaid — different from today’s open-ended federal funding and the GOP leadership’s plan that ties funding to the number of patients enrolled.

He said a block grant would give states more motivation to “innovate” to find ways to provide care for less money. I asked how states would innovate during times of economic downturns. “States have faced tough times before and would find a way,” he said.

Cruz, who was in Florida for a conference, discussed Obamacare changes in a thoughtful and mild manner that I did not expect, given the prevailing tone in Washington, D.C., these days.

As we searched for our rides, after midnight, outside the terminal, he took my business card.

My close encounters with two influential voices in the Republican Senate during one journey underlined the deep divisions the party faces as it seeks to replace the ACA.

It was time to put Obamacare to bed — at least for the night.