Heather Menzel squirmed in her seat, unable to sleep on the Greyhound bus as it rolled through the early morning darkness toward Bakersfield, in California’s Central Valley. She’d been trapped in transit for three miserable days, stewing in a horrific sickness only a heroin addict can understand. Again, and again, she stumbled down the aisle to the bathroom to vomit.

She hadn’t used since Chicago. She told herself that if she could just get through this self-prescribed detox, if she could get to her mother’s house in her hometown of Lake Isabella, Calif., all her problems would be solved.

“I’ve been through a lot of horrible, crazy stuff,” said Menzel, now 34. “I’ve been raped. I’ve been beaten up. I’ve been in prison. But trying to kick heroin on the Greyhound on the way home was the worst experience of my entire life.”

When Menzel finally arrived at the Bakersfield bus station at 6 a.m. that day in February 2014, her mother and stepfather were there waiting. The two women hadn’t seen each other in years, not since Menzel stole her mom’s jewelry and fled the area. They didn’t talk much as they drove east though the twisty canyon on State Route 178 toward Lake Isabella, a two-stoplight town with a population of 3,500, nestled in the golden Sierra Nevada foothills.

Menzel hoped that the worst of the withdrawal was over — that a new life without heroin awaited. What she didn’t know was that heroin was now cheap and plentiful in Lake Isabella, as in so many small towns in the U.S., and that her best hope for treatment was far away.

Experts recommend medication-assisted treatment for drug users like Menzel, one of nearly 2 million Americans struggling with opioid addiction, whether to prescription pills or heroin. MAT, as the therapy is known, has been proven far more effective — and less dangerous and miserable — than cold-turkey quitting. Drugs like methadone and buprenorphine can help suppress opioid cravings and stave off the physical and psychological symptoms of withdrawal.

When carefully managed, MAT can cut the risk of overdose death by half, research shows. But not all medical providers are properly trained and approved to provide the treatments, which themselves are opioids (albeit less likely to be abused). Only state-licensed and federally approved clinics can provide methadone, and doctors need to apply for a federal Drug Enforcement Administration waiver to prescribe buprenorphine.

Lake Isabella sits in the Kern River Valley, home to 32 churches but not a single methadone clinic or doctor able or willing to prescribe buprenorphine. Like half the counties in California, the valley is an opioid “treatment desert.” 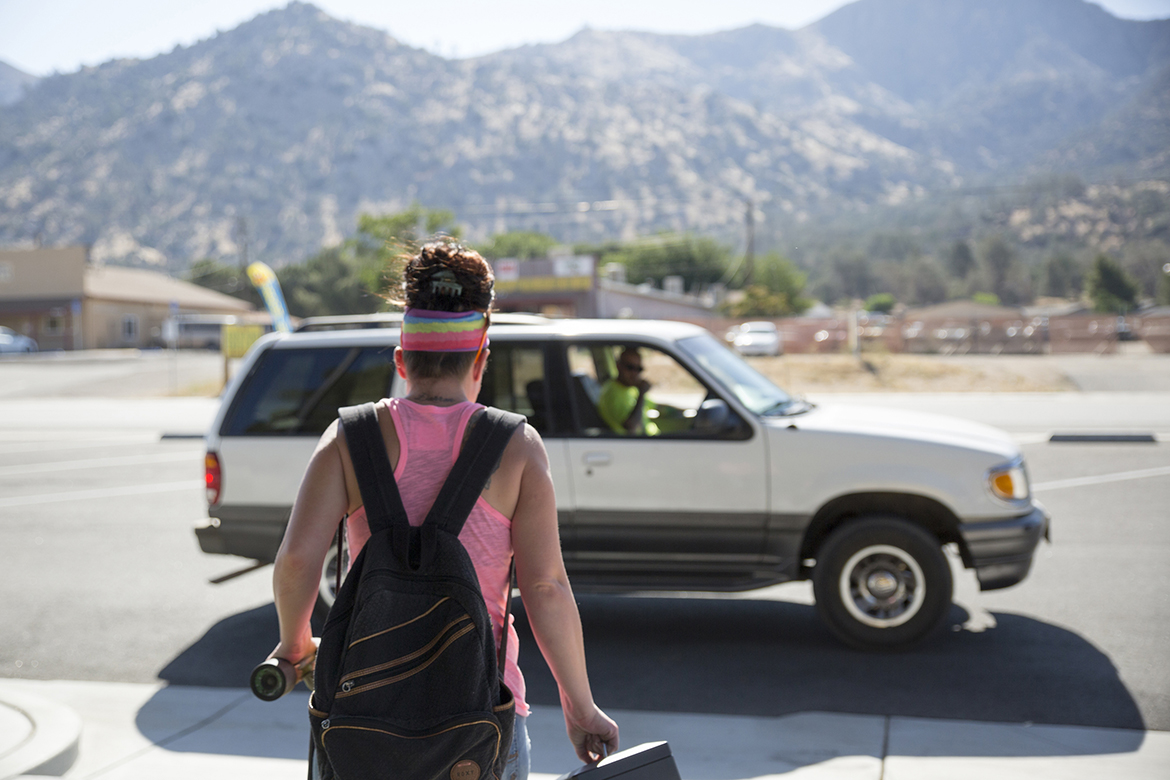 After riding the bus to the methadone clinic, Heather Menzel gets picked up by her brother at the bus stop in Lake Isabella, Calif., on June 6, 2016. (Brian Rinker for KHN)

In July, the California Department of Health Care Services awarded 19 applicants part of a $90 million federal grant to improve MAT access. In addition, $6 million was dedicated to support treatment in tribal communities. The agency hopes to create a network of “oases” in the state’s vast treatment deserts, many of which are in far Northern California, as well as eastern Kern County, which encompasses Lake Isabella.

The grants aim to pay for clinical and educational support to rural physicians, many of whom have never been trained in addiction medicine. Local doctors will handle most buprenorphine prescriptions, and in some towns, a mini-methadone program may set up shop.

But eastern Kern didn’t make the cut. For now, expanding opioid treatment in this area, and eastward, will have to wait.

Without such help, many experts say people like Heather Menzel — whose story a reporter followed over the course of a year — barely stand a chance.

From the beginning, Menzel struggled to stay clean at her mother’s. She soon fell back in with her old drug-abusing friends. Within two months of arriving home, her grand plan for getting clean slid into her veins and disappeared with the push of a plunger. She was hooked on heroin again, smoking methamphetamine and, once her mom kicked her out, homeless. 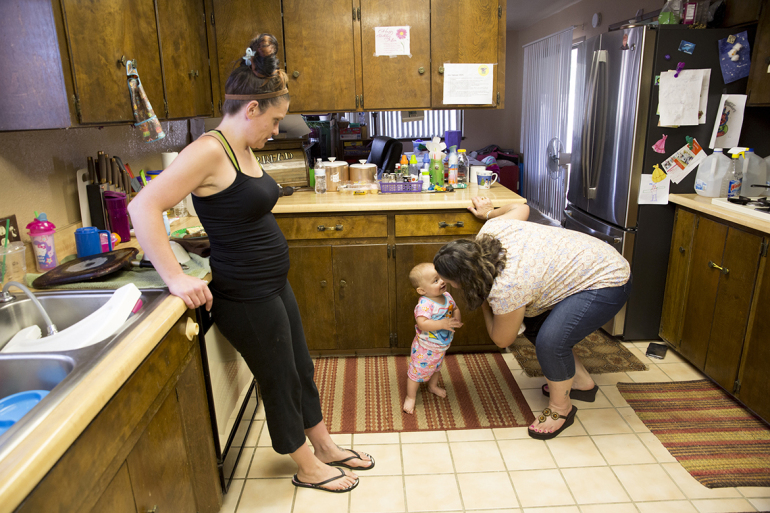 After Heather Menzel takes her methadone prescription on a summer morning in 2016, she goes into the kitchen and watches her daughter, Bella, play with Menzel’s mother, Tawanna Maxwell-Cecil, at their home in Lake Isabella, Calif. (Brian Rinker for KHN) 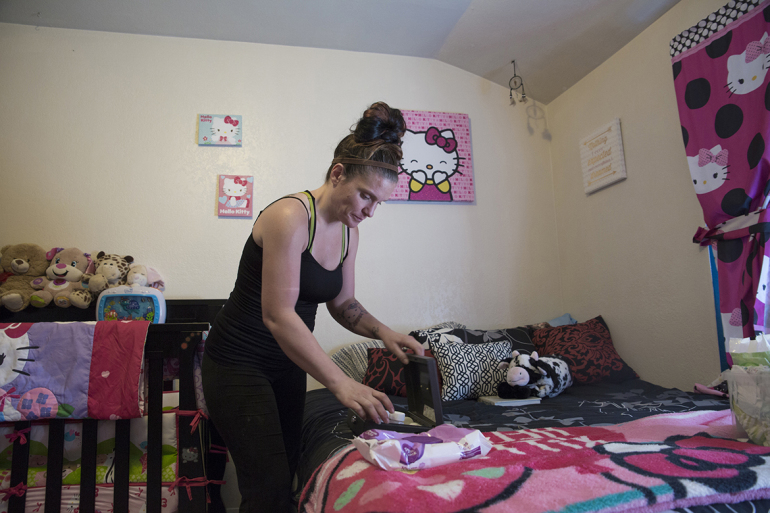 On a June morning in 2016, Heather Menzel opens a lockbox containing her take-home methadone prescription in her room in Lake Isabella, Calif. Menzel lives at her mother’s house and shared the room with her then-1-year-old daughter, Bella. (Brian Rinker for KHN)

She was risking death, and she knew it. On average, 91 people a day in the United States died of an opioid overdose in 2015, the latest figures available from the Centers for Disease Control and Prevention, and projections show the death rate will continue to rise. Overall, California’s opioid death rate is relatively low: 4.73 deaths per 100,000 people. Still, 1,966 Californians died of an opioid overdose in 2015. Kern County’s rate was nearly double the state’s in 2015, and some sparsely populated rural counties, mostly up north, have rates that are far higher.

Policymakers fear the death risk is growing as use of fentanyl moves west. A synthetic opioid estimated to be 50 to 100 times stronger than morphine, fentanyl has caused numerous overdoses and deaths on the East Coast. Some policymakers fear the fentanyl monster is heading to California, a potentially vast market of addicts.

“We really feel an urgency in California to increase access to services so if and when fentanyl arrives, we are more prepared to deal with it,” said Marlies Perez, chief of the Substance Use Disorder Compliance Division at DHCS.

Immediate, convenient access to these treatments is key. “It is very important for someone in the middle of addiction to access treatment when they are ready,” said Pfeifer. “There are these moments when people have wake-up calls — when they are ready to seek care and get out of the chaos of trying to get drugs to feel normal again.”

Menzel’s wake-up happened when she noticed that she was still sick after a morning heroin injection. After an angry call to her drug dealer to accuse him of ripping her off, Menzel soon realized it wasn’t fake heroin — she was pregnant.

She took the bus to the emergency room in Bakersfield. “I’m fully addicted to heroin,” she blurted out to the ER doctor. “What do I do?” The doctor told her, “If you want to save your baby, you need to get on methadone.”

Affording methadone wasn’t a problem for Menzel. Medi-Cal, the state’s version of the Medicaid program for the poor, covered the costs. What impeded her was the daily trip from Lake Isabella to Bakersfield — an hour-plus bus ride down the curving canyon road. A round-trip ticket cost $5, more than she could spare. And if she missed an early bus back, she had to stay most of the day in Bakersfield to catch the next one. 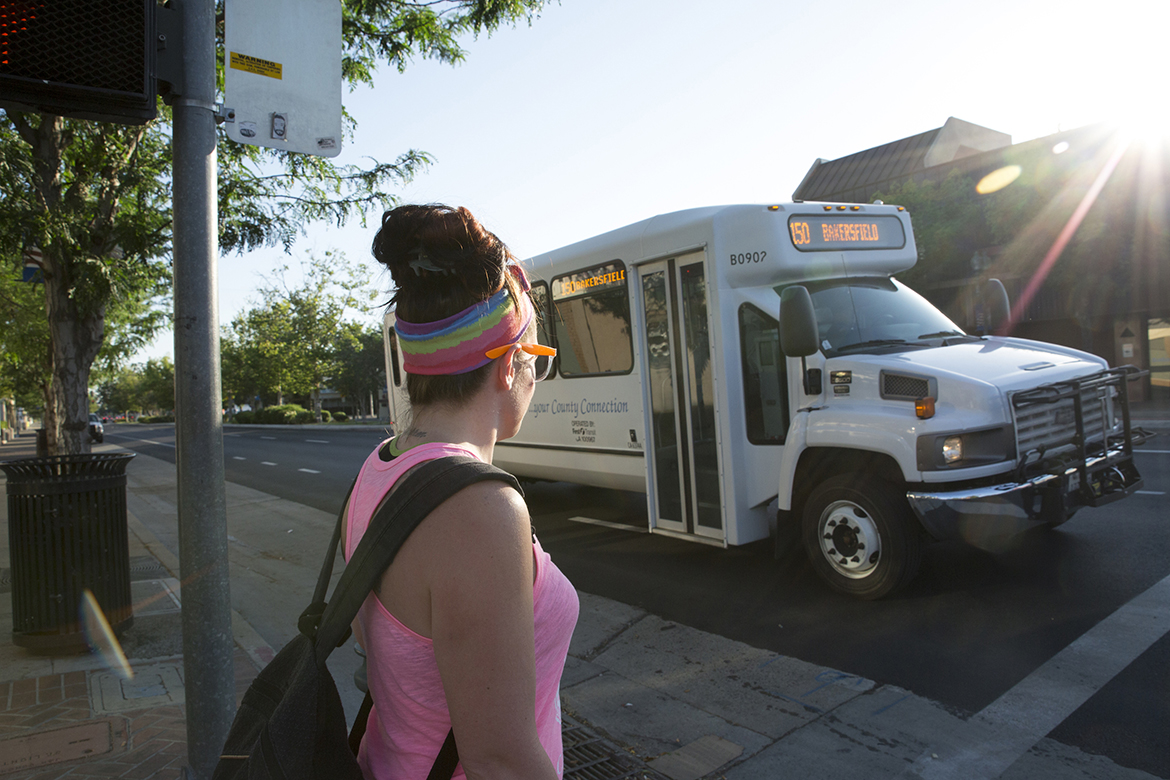 After receiving her methadone dose at a clinic in Bakersfield, Calif., Heather Menzel waits for the bus to take her back home to Lake Isabella on June 6, 2016. The bus ride takes about an hour and goes through a twisty canyon into the Sierra Nevada foothills. (Brian Rinker for KHN)

For safety’s sake, the clinic started her at a low dose, increasing the amount until it was just right for her. But that beginning dose didn’t stave off the withdrawals, so she continued to use heroin and meth. She started to miss too many days of treatment and was kicked out of the program.

Menzel’s mother got her back in, promising the clinic that she would drive her daughter there every day. That meant quitting her job at Meals on Wheels.

“The fact you have to travel an hour to two hours every day to receive treatment requires somebody to operate a vehicle, pay for gas, and for some of our patients that is impossible,” said Javier Moreno, who manages the narcotics treatment programs in the Central Valley for Aegis Treatment Centers, the state’s largest methadone provider.

His Bakersfield clinics serve about 20 people in the Lake Isabella area, but Moreno thinks many more residents could benefit from MAT.

Menzel didn’t take the ideal path to getting clean. But she eventually began to feel the groove of methadone, and her cravings for heroin subsided. After a couple of months, she was able to get methadone “take-home” doses for the weekend. She started riding the bus again to give her mother, who has the autoimmune disease lupus, a break.

“I was big and pregnant,” said Menzel, who woke up Monday through Friday at 5:30 a.m. to catch the bus. “I had to ask the bus driver to pull over and pee a lot. But I made it.” 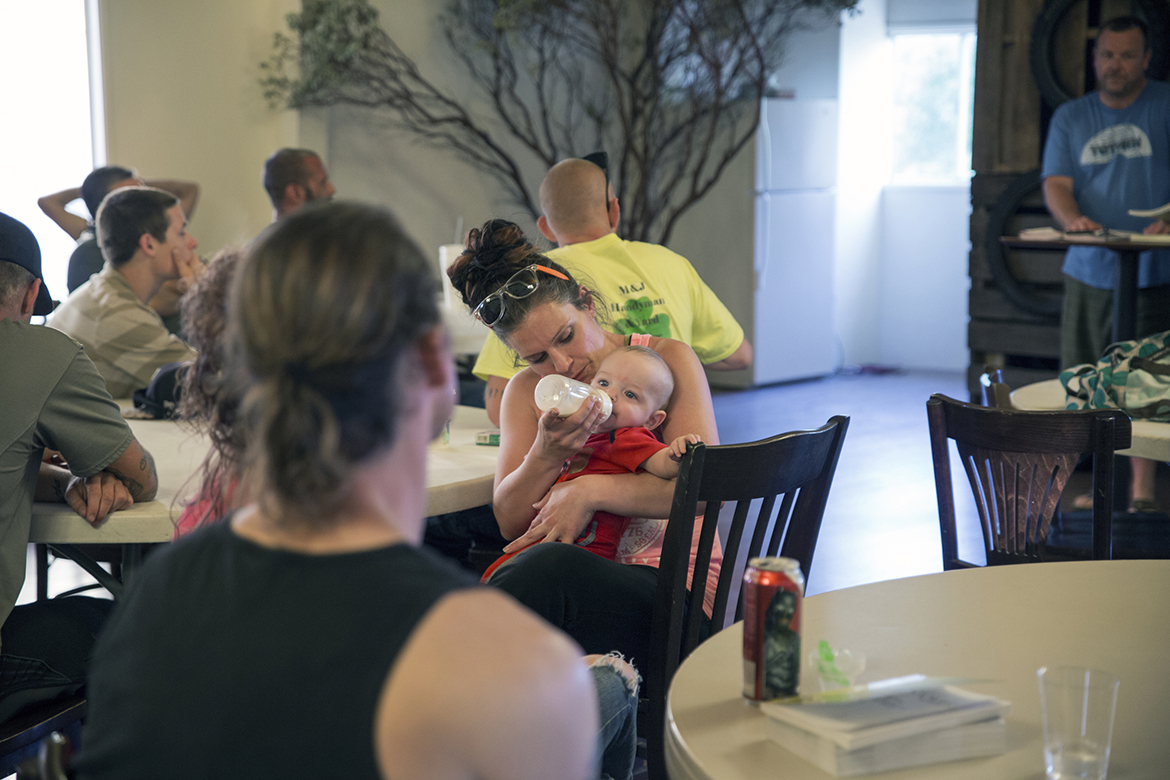 Heather Menzel feeds her daughter, Bella, during a Christian-based drug recovery meeting in Wofford Heights, Calif., in June 2016. Menzel is taking a maintenance dose of methadone to treat her heroin addiction. (Brian Rinker for KHN)

In May 2015, Menzel gave birth to a healthy girl and named her Bella. She said she hasn’t used heroin or any other drug, besides methadone, in more than two years. She’s on a maintenance methadone dose, just 39 milligrams compared with 140 mg she used to take and plans to cut back until she is off it completely. Now she drives herself to the clinic every other week and has enrolled in community college, hoping to become a certified drug and alcohol counselor.

“I don’t know if there will ever be a methadone clinic in the Kern River Valley,” Menzel said. But if one ever arrives, she said, she’d love to work there.

“I really want to work with other pregnant women who will be going through the same thing that I went through.”

A Long And Winding Road: Kicking Heroin In An Opioid ‘Treatment Desert’