For generations, physicians have been trained in basic science and human anatomy to diagnose and treat the individual patient.

But now, massive stores of data about what works for which patients are literally changing the way medicine is practiced. “That’s how we make decisions; we make them based on the truth and the evidence that are present in those data,” says Marc Triola, an associate dean at New York University School of Medicine.

Figuring out how to access and interpret all that data is not a skill that most physicians learned in medical school. In fact, it’s not even been taught in medical school, but that’s changing.

“If you don’t have these skills, you could really be at a disadvantage,” says Triola, “in terms of the way you understand the quality and the efficiency of the care you’re delivering.”

That’s why every first and second year student at NYU Medical School is required to do what’s called a “health care by the numbers” project. Students are given access to a database with more than 5 million anonymous records — information on every hospital patient in the state for the past two years. “Their age, their race and ethnicity, what zip code they came from,” Triola lists, as well as their diagnosis, procedures and the bills paid on their behalf.

The project, funded in part by an effort of the American Medical Association to update what and how medical students are taught, also includes a companion database for roughly 50,000 outpatients. It’s called the Lacidem Care Group. (Lacidem? That’s “medical,” backwards). It contains data from NYU’s own faculty practices — scrubbed to ensure that neither the patients nor the doctors can be identified. Students can use tools provided by the project to “look at quality measures for things like heart failure, diabetes, smoking, and high blood pressure,” says Triola. “And drill down and look at the performance of the practice as a whole and individual doctors.” 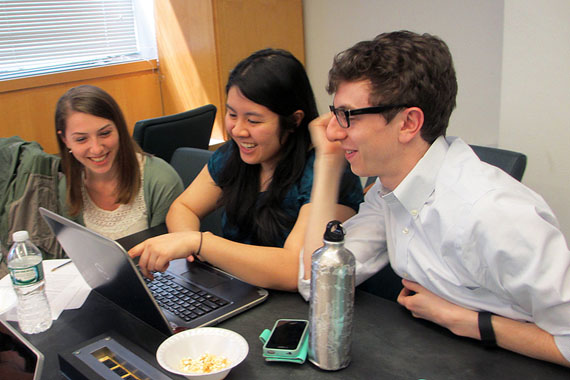 Some students have taken to the assignment with relish. Second-year student Micah Timen is one. Timen likes numbers. A lot. A former accountant before applying to med school, he keeps a spreadsheet to track his study hours before a test. An upcoming test is on the digestive system. “So I know I have 18 hours and 40 minutes left to make sure I feel comfortable walking into my exam,” he says.

For his project, Timen wanted to know if the cost to patients of hip replacement surgery around the state vary as much as the cost of a fast-food hamburger. Timen says they tried comparing hip replacement costs using The Economist magazine’s famous Big Mac Index, which measures purchasing power between currencies. “But when you call McDonald’s, they don’t give you prices over the phone,” he said. So he tried Plan B: “Burger King gave it to me.”

Using his “Whopper Index” instead, Timen found, not surprisingly, that the price of a giant burger sandwich is higher in New York City than, say, Albany. So, too was the amount patients paid for their hip replacements. But the margin was much wider for health care than for hamburgers, meaning patients are paying more in some places than simple geography would suggest. Timen says he’d like to explore why that might be, “but unfortunately med school is a little bit time-consuming,” so that may have to wait.

Still, it turns out the classes appeal not just to data “junkies,” like Timen, but also to those who were not already steeped in crunching data.

“I really have no statistical background,” says Justin Feit, also a second year student. “I don’t even know how to use Excel well.”

So Feit was partnered with Jennifer Lynch, who already has a PhD — in physics. She says that if medicine wasn’t moving in the direction of more data interpretation, “I don’t know if I would have gone into medicine.”

Together Feit and Lynch looked at the rates of cesarean births around the state – and, like the cost of hip replacements, found that C-section rates varied widely. But their project will get more than just a grade. A faculty member at NYU is using it as part of a bigger research project headed for publication.

Triola says he hopes that will happen more and more.

And the concept of having students learn to use health data is catching on quickly. Triola says NYU is offering its database and program to other medical schools; seven are already incorporating it into their curriculum.