Should the middle class be eligible for Medicaid?

The health program, funded jointly by the feds and the states, was devised to cover the poor. But if a provision in last year’s health law isn’t changed that could be the case for people with pretty healthy incomes. 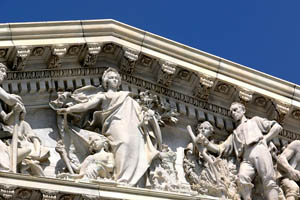 So today, the House approved a bill that would make the change. The bill is backed by President Obama, among others, and it passed relatively easily in a vote of 262-157.

But, as usual with things related to health and tax policy, nothing is quite as simple as it seems.

The “glitch,” if it is one, refers to the fact that under the health law, most Social Security benefits are not taxed. And the untaxable portions of those benefits aren’t counted to determine eligibility for Medicaid. Same goes for the State Children’s Health Insurance Program, and for other income-tested provisions of the law, including subsidies for private health insurance premiums.

By failing to count most Social Security benefits, it’s true, as last summer’s stories pointed out, that a couple retiring at age 62 (too young for Medicare but just barely eligible for early Social Security) earning as much as $60,000 per year could gain access to Medicaid for those three years.

“This is unacceptable,” said Rep. Diane Black (R-Tenn.) sponsor of the House bill, on the floor Wednesday during the preliminary debate on the measure. “The health care law’s deviation from the typical method of counting income results in taxpayer dollars being directed to individuals who do not… meet the standard definition of low income.”

But the change will affect more than just the near-elderly retiring early. According to the Congressional Budget Office’s latest estimates on the effects of the change, the measure would reduce Medicaid enrollment by between 500,000 and 1 million people per year, including those receiving Social Security retirement payments, survivor benefits, disability benefits and some other types of payments.

Some of those people would get other coverage, but some, said CBO, would be uninsured. “It was not a glitch,” insisted Rep. Joe Crowley (D-N.Y.) on the House floor during debate on the measure. “This language was deliberately put into the health care law to expand affordable health insurance. And it will particularly help early retirees between the ages of 62 and 64, as well as Americans on disability.

But if the prospect of cutting back on people getting insurance alone wasn’t enough to bother many House Democrats (only a couple of dozen voted for the measure), the money saved by the bill (an estimated $21.7 billion over the next 10 years) is now being used to offset the cost of another bipartisan bill. That one would repeal a requirement that governments at all levels withhold 3 percent of funds paid to contractors in order to ensure tax compliance. The repeal of the withholding requirement — originally passed under President George W. Bush — is considered a job-stimulating measure. It passed overwhelmingly: 405-16.

“Republicans want to pay for the 3-percent bill by making it harder for retirees, the disabled and poor to get access to health insurance,” said Alcee Hastings, (D-Fla.). “My friends in the majority have decided to throw retirees and disabled individuals under the bus in order to offset a completely unrelated bill.”

But using the money saved by making the Social Security tax change to pay for the jobs bill means that those health-related savings will no longer be available to pay for other health legislation.

And what legislation might that be? Well, noted House Ways and Means Committee ranking member Sander Levin (D-Mich.), there is that small matter of a 30 percent scheduled cut for doctors on Medicare that will take effect unless Congress acts by the end of the year.

“Essentially what would be done now is to use up a provision that impacts health and lose the possibility of using it in terms of physician reimbursement,” he said.

Still, the majority of House Democrats were outvoted. Both the health and jobs bills are now on their way to the Senate, where their tied fates remain uncertain.

A Tweak To Health Law Would Eliminate Medicaid For Some