Inside the marble palace, as some justices have called it, the regulars in the Supreme Court bar, and in the news media, all knew that the odds of getting high drama today via health care — the decision, we mean, not the real thing — were maybe one in ten. 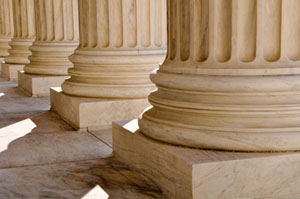 But they were almost all there anyway. If the health care ruling did come down, it might well be the biggest decision in decades. And these reporters and lawyers would no more take a one-in-ten chance of missing it than play Russian roulette with one bullet in the chamber.

Besides, they also knew that a second Big One (immigration), and a third (mandatory life without parole for juveniles), were a lot more likely today, and likely to deliver high drama of their own.

The chatter before the justices started talking was about what could be read into tea leaves, such as Justice Ruth Bader Ginsburg’s cheerful demeanor when she alluded to the health care case in recent public remarks.

The chatter after was about the angry dissents in those other two cases.

But inside the palatial courtroom, the real drama came when the justices were the ones talking.

The first to speak at length was Justice Elena Kagan, summarizing her opinion striking down by 5-4 all laws — both state and federal — that mandate sentences of life in prison without parole for certain especially horrible murders by juveniles (as well as adults). Then came Justice Samuel Alito, summarizing at length his dissent — one of three — from what he called a sweeping aside of the laws of a majority of the states, based not on the Constitution but on the whims of five justices.

Justice Anthony Kennedy then summarized his opinion striking down by 5-3 three provisions of a notoriously tough Arizona law designed to stem the tide of illegal immigrants into that state. Justice Antonin Scalia summarized his dissent from that one.

Justices summarize dissents from the bench only on those unusual occasions when they are fighting mad. And if Alito was smoldering, Scalia was blazing with anger, both at the majority and at the Obama administration, which he accused of refusing either to enforce federal immigration law or to allow border states to protect themselves.

It wasn’t over. Reporters got another surprise when they streamed down to the press room after Chief Justice John Roberts had announced that all remaining cases (including health care) would be issued on Thursday.

This one was a terse, one-page smack down — again by 5-4 — of the Montana Supreme Court for upholding a state law that the majority saw as unmitigated defiance of the same majority’s 2010 Citizens United decision that corporations have First Amendment rights to spend on political campaigns.

Plus, naturally, a dissent by the four liberals, who called for overruling Citizens United.

A View From Inside The Supreme Court