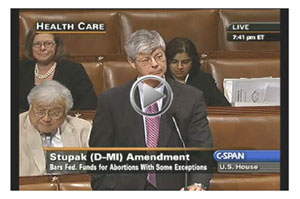 The House-passed health bill bars insurers from selling policies that cover abortion to anyone who gets a federal subsidy. But it does allow insurers to offer optional abortion coverage that consumers could purchase with their own money. Based on some states’ experiences, it’s unlikely insurers would sell such coverage.

The abortion debate rivals the controversy over the public-option – the proposal to offer consumers in the new insurance exchanges a government-run insurance plan. The fight now moves to the Senate, where Majority Leader Harry Reid, D-Nev., is trying to meld two committees’ bills.

Laurie Rubiner, vice president for policy at Planned Parenthood, says she is optimistic about blocking a similar amendment in the Senate. “This is a very broad, middle-class abortion ban in the exchange and once people really understand that I just don’t think there’s going to be the support for it.”

The U.S. Conference of Bishops, which led the lobbying fight in the House for the amendment by Reps. Bart Stupak, D-Mich., and Joe Pitts, R-Pa., is just as determined. “The Conference will remain vigilant and involved throughout this entire process to assure that these essential provisions are maintained and included in the final legislation,” the organization’s president, Cardinal Francis George of Chicago, said in a written statement.

Here’s basic information about the House amendment and private insurance coverage of abortion:

Q: Do the House restrictions apply to all insurance?

A: No. They apply only to policies sold to people who qualify for federal subsidies to purchase insurance through the exchanges. Most job-based insurance, which is how the majority of insured Americans currently get their coverage, would not be affected.

Q: Who can buy through the health insurance exchanges?

A: Initially, the exchanges will be open to the uninsured, people who buy their own coverage and some small businesses. Two years after the exchanges open, Congress could decide whether to allow larger employers to purchase coverage there.

Q: Could consumers using the exchanges buy policies that offer abortion coverage if they use their own money, rather than federal subsidies?

A: Only if insurers decide to offer two types of policies in the exchange: ones made available to subsidy-eligible people that don’t cover abortion, and another set, sold only to those who don’t get federal subsidies, that would cover it. Insurers may have little incentive to offer both, as the vast majority of the exchange marketplace is expected to be subsidy-eligible people.

Q: Are there other options for people to get abortion coverage?

A: Yes, insurers could opt to create “abortion riders,” separate add-on coverage that consumers could purchase with their own funds.

Q: Do such policies exist?

A: Five states  Idaho, Kentucky, Missouri, North Dakota and Oklahoma  prohibit insurers from covering abortions except to save the life of the mother or in cases of rape or incest, but allow insurers to sell separate abortion riders. Insurance departments in Idaho, Kentucky and Missouri say they don’t track such riders, so it isn’t clear if any are offered. North Dakota and Oklahoma say insurers there don’t offer abortion riders to individuals. In Oklahoma, however, one insurer has filed for a rider to offer abortion coverage to small groups. And in Idaho, one of the state’s major insurers offers abortion coverage to small groups if they pay an additional premium charge.

Q: How many people currently have abortion coverage in their health plans?

A: A survey by the Kaiser Family Foundation in 2003 found that 46 percent of workers had insurance that covered abortion. (KHN is part of the foundation.) Experts say most people use their own funds to pay for abortion. According to the Guttmacher Institute, which studies reproductive issues, about 13 percent of abortions are directly billed to insurers. That percentage could be low because some people may pay for abortions directly, then seek reimbursement from insurers, the institute says.

Q: Are there other restrictions on federal funding of abortion coverage?

A: Yes. The 1976 Hyde Amendment bars the use of federal funds to pay for abortions, except to save the life of the mother or in cases of rape or incest. Thirty-two state Medicaid programs, the joint federal-state programs for low-income people, limit abortion funding to those cases, according to the Guttmacher Institute. One, South Dakota, pays for Medicaid abortions only to save the life of the mother. And 17 use state funds to more widely offer abortions through their Medicaid programs. Restrictions on payment for abortion coverage are also in place for federal employees, women serving overseas in the U.S. military and women in federal prisons.

Q: How much do abortions cost?

A: First-trimester abortions can cost between $300 and $900, according to Planned Parenthood. Later-term abortions or abortions where women may face a higher risk of complications are more expensive, running several thousand dollars if hospital care is required.

How The House Abortion Restrictions Would Work