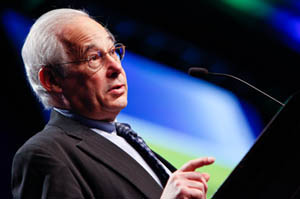 Donald M. Berwick, head of the Centers for Medicare and Medicaid Services speaks at the Military Health System conference in January. (Photo by Military Health via Flickr).

ACOs are a new delivery model created under the health law that offers providers financial incentives to work together to provide high quality care to Medicare beneficiaries while keeping down costs. But hospital and doctor groups are complaining that the proposed regulation creates more financial risks than rewards and imposes onerous reporting requirements. On Monday the American Hospital Association estimated that starting an ACO could cost a hospital $11 million to $26 million in the first year. The proposed regulation put the cost at $1.8 million.

The Department of Health and Human Services announced Tuesday a new “Pioneer” ACO model, which officials promised “will provide a faster path for mature ACOs” and save Medicare as much as $430 million over three years. The idea is that existing integrated-care organizations such as Geisinger Health System, the Cleveland Clinic and Intermountain Healthcare will be able to launch ACOs as early as this summer. One incentive: the opportunity to pocket more of the expected savings in exchange for taking on greater financial risk. These ACOs also will be able to work with private insurers and eventually Medicaid, the state-federal program for the poor.

For less mature health systems, the Centers for Medicare & Medicaid Services also announced it is considering helping cash-strapped provider groups form ACOs by giving them some of their share of anticipated savings upfront. The agency is requesting comments on the idea by June 17. In a third step, CMS will offer four free “learning sessions” for providers interested in finding out more about starting an ACO.

CMS head Dr. Donald Berwick said in a news briefing that the complaints from provider groups were “nothing we didn’t anticipate” and showed they were engaged in the ACO discussions. The Pioneer program, he said, is another “exciting new option.”

Some health care experts say the new program is intended to get some of the major health systems back at the ACO table. The American Medical Group Association, which represents nearly 400 large organizations, last week released a letter warning that more than 90 percent of its members would not participate because of the reporting requirements and financial disincentives. Participants in Medicare’s Physician Group Practice Demonstration Program, considered an ACO precursor, wrote a letter citing similar concerns.

Dan Mendelson, CEO of the consulting firm Avalere Health, said the Pioneer program is an effort to “expedite the launch of a few ACOs” for political reasons. He said the Obama administration needs to show that “something is happening” by providing successful examples for other provider groups to follow. He added that the innovations are an encouraging sign that CMS is really listening to the health industry after the “resounding thud” of the proposed rule.

But Michael Millenson, president of Health Quality Advisors LLC, said Tuesday’s announcement is a sign that CMS has capitulated to the growing backlash by scaling back the ACO program and “kicking the can down the road.” Before the proposed ACO rule was released, he said, CMS expected “an army of ACOs” ready to march forth and transform health care. But after the rule, the tone in the industry changed. Now, “instead of the army, you have hardly anyone volunteering.”

Rather than rolling out ACOs nationally, Millenson said, CMS is turning the idea into “a demo project” that will be limited to only 30 health systems. “It’s a step backwards,” he argued, and creates a bifurcated system in which the major integrated systems will be on a separate track from the smaller groups “who are just dipping their toes in the water.”

But Blair Childs, senior vice president of Premier, an alliance of more than 2,500 hospitals, said the new program is a positive sign  “the more options people can have, the better.” He said he’s had many talks with CMS and it’s clear the agency is listening to concerns. Nonetheless, he said there’s still “dissatisfaction with the rule that needs to be addressed.”

It’s not clear when the final ACO rule will be released. The main program is supposed to launch in January 2012.