The Obama administration said Wednesday that it would delay imposing penalties for six weeks on some consumers who might have been caught in a sticky timing problem for enrolling in coverage through the health law’s new insurance marketplaces.

Those marketplaces, also known as exchanges, have come under intense scrutiny since opening on Oct. 1 because the technology has malfunctioned. But the White House is not linking this change of policy to website problems. 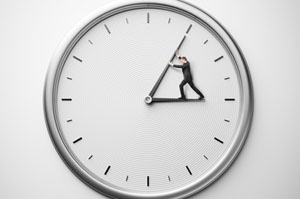 “There is a disconnect between the open enrollment and individual responsibility time frames in the first year only. The administration is working to align those policies and will issue guidance soon. This guidance will ensure that if you sign up for insurance by the end of March, you will not face a penalty,” a Department of Health and Human Services official said late Wednesday. The official did not provide any additional information on when that guidance would be forthcoming.

The law currently requires that by Jan. 1 most people must have health insurance.  But the law also allows consumers to be without coverage for less than three consecutive months without a fine, meaning they have until March 31 to get coverage.

However, to have insurance by then, consumers would have to choose a policy by Feb. 15 to allow enough time for their enrollment to be processed so coverage would start March 1. Most insurance coverage begins on the first of the month.

With the new administration announcement, consumers can wait until March 31 – when the current enrollment period ends — to enroll and not face fines.

Before Wednesday night’s announcement, several Senate Democrats had begun to push the administration to delay the mandate due to the ongoing problems with healthcare.gov, which is preventing many people from signing up for coverage.

Sen. Joe Manchin, D-W. Va., announced in an interview with Fox News’ Bill O’Reilly Wednesday night that he and Sen. Johnny Isakson, R-Ga., plan to offer a bill that will delay the individual mandate penalties until 2015. His office said the bill is still being drafted.

Shaheen, Begich and Pryor are all facing reelection in 2014.

But House Minority Leader Nancy Pelosi, D-Calif., dismissed calls for changing the deadlines for enrollment or the mandate penalty because of the current technical problems with the marketplace website. “We have a commonsense initiative going forward and what we want to do is fix it and go forward with it, not make policies predicated on it not working,” she said.

In July, the administration announced it would delay for one year a requirement that businesses with 50 or more workers provide health insurance or pay a fine.  But it left in place the requirement that most individuals have coverage by Jan. 1. In 2014 the amount is $95 or 1 percent of income, whichever is greater. In 2016 the penalty rises to $695 or 2.5 percent of income, whichever is greater. Republicans have argued that the administration should delay the mandate for individuals for a year also.

But officials point out that change could severely impact the insurance pool. The individual mandate was added to the law to make sure that healthy individuals buy insurance so that it can be affordable for sicker beneficiaries. If only older consumers or those with medical problems were to enroll in the marketplace plans, they would quickly become too expensive.

The health law will be the focus on several upcoming hearings on Capitol Hill where administration officials and others involved with the website are expected to face tough questioning from Republicans.

This story was updated on Oct. 24 to add comments from House Minority Leader Nancy Pelosi and to note that Sen. Mark Begich is supporting an extension of the enrollment deadline but he does not support a delay in implementation of the individual mandate.