At the Interfaith Dental Center in Crown Heights, Brooklyn, people with dental pain can walk into a ground floor office off Bedford Avenue and get treated without an appointment. They might have to wait in a packed waiting room. But if they’re in the door by 5 p.m., a dentist will see them.

Residents in this low- to middle-income neighborhood likely don’t realize how lucky they are. The majority of Americans have to travel miles to see a dentist who takes their insurance, particularly if they’re covered by Medicaid. Many dental patients with private insurance cannot afford to pay their share of the bill. 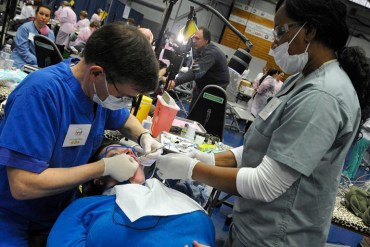 A dentist works on a patient at a free Connecticut dental clinic fair in 2012 for those who would otherwise not receive dental care. (Photo by Peggy Stewart Western Connecticut State University via Flickr)

Federal law requires state Medicaid programs to include dental care for children, and the Affordable Care Act extended that requirement to private insurers. But the federal health law did little for adults: While premium tax credits were made available to help low-income people purchase health insurance, the subsidies cannot be used to purchase dental coverage except as an add-on to health coverage. No new dental benefit requirements were included for adults covered by Medicaid.

“The ACA was a big flop when it comes to adult dental coverage,” said Dr. Jonathan Shenkin, vice president of the American Dental Association (ADA).

Even so, some states have stepped up coverage for at least some adults on Medicaid. Virginia added a dental benefit for pregnant women in March. Colorado introduced limited adult dental coverage for the first time last year. Also last year, California, Illinois, Massachusetts and South Carolina reinstated benefits that had been cut in the years since the recession began in 2007. Indiana began offering expanded adult dental benefits this year.

Shenkin acknowledged the federal health law’s provision allowing young adults to stay covered by their parents’ insurance until age 26 has helped. Fewer young adults are showing up in emergency rooms with dental pain, according to an April ADA survey. About 1.4 million Americans have purchased dental coverage on health insurance exchanges since January 2014 when the law took full effect. “But overall, we’ve seen no real improvement in the quality of adult dental coverage for decades,” he said.

“Adult dental benefits are caught in a pendulum swing of contraction in fiscal downturns and expansion when fiscal pressures go away,” said Andrew Snyder, dental expert at the National Academy of State Health Policy. “That’s been the story for a long time. I don’t know that there was ever a time when adult dental was really great.”

Although the ACA does not make Medicaid dental coverage mandatory for adults, it gives states that have chosen to expand Medicaid a potential financial incentive to include dental benefits.

Under the ACA, the federal government pays the entire health care bill for all newly enrolled adults with incomes below 138 percent of the federal poverty level ($16,243 for an individual) through 2016. After that, the federal share gradually decreases to 90 percent in 2020 and beyond. As a result, officials in a few states are considering dental coverage for the first time or reinstating coverage cut during the last recession.

Another barrier to dental care for low-income adults is the relatively low reimbursement rates offered by state Medicaid programs. Extensive paperwork and oversight also limit the number of dentists willing to take Medicaid patients. (The ACA calls for even more intensive oversight and audits.) The result is poor access to preventive care for low-income people on Medicaid in much of the country, ultimately resulting in higher overall costs.

The problem is not limited to Medicaid. Most employer-sponsored insurance pays for only a portion of the cost of an annual checkup and a few fillings. For moderate-income people who need more extensive restorative work, out-of-pocket expenses can be unaffordable. In a recent survey, nearly four out of 10 respondents said they or a family member had put off seeing a dentist because of concerns about out-of-pocket expenses.

Americans spend as much to treat dental disease — almost all of it preventable — as on the treatment of all cancers combined, according to DentaQuest, a research and advocacy organization and administrator of dental insurance plans, including Medicaid. 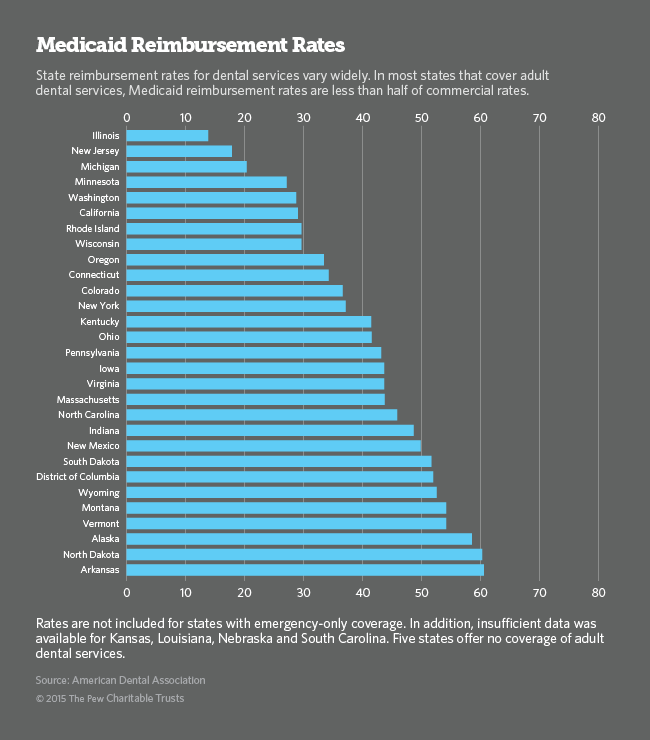