A distinguished vascular specialist in his 80s performs surgery, then goes on vacation, forgetting he has patients in the hospital; one subsequently dies because no doctor was overseeing his care. An internist who suffered a stroke gets lost going from one exam room to another in his own office. A beloved general surgeon with Alzheimer’s disease continues to assist in operations because hospital officials don’t have the heart to tell him to retire. 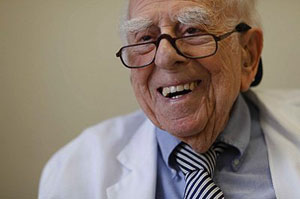 These real-life examples, provided by an expert who evaluates impaired physicians, exemplify an emotionally charged issue that is attracting the attention of patient safety experts and hospital administrators: how to ensure that older doctors are competent to treat patients.

About 42 percent of the nation’s 1 million physicians are older than 55 and 21 percent are older than 65, according to the American Medical Association, up from 35 percent and 18 percent, respectively, in 2006. Their ranks are expected to increase as many work past the traditional retirement age of 65, for reasons both personal and financial.

Many older doctors remain sharp, their skills up-to-date and their judgment honed by years of experience. Peter Carmel, the AMA’s immediate past president, a 75-year-old pediatric neurosurgeon in New Jersey, recently wrote about “going full tilt.”

Unlike commercial airline pilots, who by law must undergo regular health screenings starting at age 40 and must retire at 65 — or FBI agents, whose mandatory retirement age is 57 — there are no such rules for doctors. Nor are any formal evaluations required to ensure the continued competence of physicians, many of whom trained decades ago. Most states require continuing education credits to retain a medical license, but, as Ann Weinacker, chief of the medical staff at Stanford Hospital and Clinics in California, observed, “you can sleep through a session, and if you sign your name, you’ll get credit.”

“The public thinks that physicians’ health and competence is being vigorously monitored and assessed. It isn’t,” said geriatrician William Norcross, 64, founding director of a program at the University of California at San Diego that performs intensive competency evaluations of doctors referred by state medical boards or hospitals. The program — known as PACE, for Physician Assessment and Clinical Education — is one of about 10 around the country.

Norcross, who evaluates 100 to 150 physicians annually, estimates that about 8,000 doctors with full-blown dementia are practicing medicine. (Between 3 and 11 percent of Americans older than 65 have dementia.)

Studies have found, Norcross noted, that approximately one-third of doctors don’t even have a personal physician, who might be on the lookout for deteriorating hearing, vision or motor coordination, or the cognitive impairment that precedes dementia.

The Effects Of Aging

“Doctors are not immune to the effects of aging,” Norcross said, adding that the onset of dementia is often insidious and gradual. Too often, he said, health problems become impossible to ignore after a catastrophic event, such as the death of a patient. “Doctors with cognitive and neurological problems almost never have insight into their problems,” he said, and many deny that anything is wrong.

While few experts would argue that age alone should control who can continue to practice, some studies suggest that doctors’ skills tend to deteriorate over time. A 2006 report found that patient mortality in complex operations was higher among surgeons older than 60 than among their younger colleagues.

To address the problem in a systematic way, a small but growing number of hospitals — including the University of Virginia Health System, Stanford Hospital and Clinics, and Driscoll Children’s Hospital in Corpus Christi, Texas — have recently adopted policies requiring doctors over a certain age — 70 at U-Va. and Driscoll, 75 at Stanford — to undergo periodic physical and cognitive exams as a condition of renewing their privileges.

Diane Pinakiewicz, former president of the National Patient Safety Foundation, a Boston-based information and advocacy group, calls the policies “a fabulous idea” that is long overdue. “Without a rule, it’s left to someone’s personal decision” to self-monitor.

New Hampshire health-care consultant Jonathan Burroughs, who has worked with hospitals seeking to implement testing policies for older physicians, estimates that roughly 5 to 10 percent of institutions have adopted them and that interest is growing.

“Colleagues have a code of silence,” said Burroughs, who spent 30 years as an emergency department physician. During his career, Burroughs said he followed several elderly doctors around, quietly correcting their orders to prevent mistakes. Such experiences, he said, are nearly universal in medicine.

“Most medical staffs look the other way, thinking, ‘There but for the grace of God.’ This person has been a good doctor, and we’re not going to betray them,” Burroughs said.

But that kindness can backfire, he added, subjecting patients to potentially disastrous consequences such as serious injury or death, and the faltering physician to a malpractice suit or the loss of a medical license.

John Schorling, a professor of medicine who heads U-Va.’s Physician Wellness Program, said the policy adopted last year was prompted by “general concerns” about patient safety and is modeled on aviation industry practices. “Pilots have people’s lives in their hands, and so do doctors,” he said.

But some hospital administrators dispute the need for such testing. Fitness to practice, they maintain, is already paramount in decisions that hospitals make every two years or so to renew a physician’s privileges. And that process, they say, has gotten more stringent in the past decade with the proliferation of performance data on doctors.

“In medicine, I think you need to look at people individually,” said David Mayer, 59, vice president of quality and safety at MedStarHealth, the largest hospital network in the District and Maryland. “To just put a number there and say, ‘You need to be looked at more closely’ because of age is not justified.”

Brian Johnston, chairman of the emergency department at White Memorial Medical Center in Los Angeles, agrees. “It’s just very hard to make a hard-and-fast rule based on age,” said Johnston, 74, who is still pulling regular shifts in the fast-paced specialty. Testing everyone who hits a certain age is “unnecessarily ham-handed.”

But Marty Makary, a Johns Hopkins surgeon and author of “Unaccountable: What Hospitals Won’t Tell You and How Transparency Can Revolutionize Health Care,” says that screening can weed out those who should no longer be practicing while giving “those who are fully functional the freedom to practice without the stigma of ageism.”

Although an older doctor can be a font of wisdom and experience, Makary warns that too often patients receive what he calls “Fred Flintstone care” from doctors whose skills have not kept pace. “Some older surgeons are all over minimally invasive surgery,” he said, “but many have just ignored minimally invasive techniques.” Their patients, he said, may receive state-of-the-art care — for 1976.

Orthopedic surgeon Ralph Blasier agrees. In a 2009 review article entitled “The Problem of the Aging Surgeon,” Blasier wrote that “essentially every treatment technique taught 25 years ago has been abandoned and replaced,” including the treatment of traumatic fractures and joint diseases. “All surgical specialties,” he continued, “have had similar turnover of treatment methods.”

Blasier, 62, who practices in Escanaba, Mich., has cut back his practice in recent years. He no longer performs certain demanding operations, such as arthroscopic shoulder surgery, because he doesn’t think he does them as well as he did at age 50, when he was at his peak.

One reason Blasier believes doctors are loath to retire is that they haven’t planned for it. Five years ago, he earned a law degree from Wayne State University and is handling several legal cases, in addition to his reduced surgical practice. In a few years when he retires, he plans to practice law.

At Stanford, Weinacker, chief of the 1,800-member medical staff, said that reaction to the policy, which affects about 25 doctors, has been mixed. Several doctors, she said, have decided to retire instead of undergoing testing. “I think the main thing I stressed with people was that this policy is intended to be supportive,” not punitive. Anyone found to have problems will be referred to the PACE program for a more complete evaluation.

At U-Va., Schorling said that 28 of the 35 doctors older than 70 completed screening and passed easily. The other seven decided against participating and no longer have hospital privileges there, although they are free to practice elsewhere.

Rheumatologist Ephraim Engleman, who will turn 102 in March, said he plans to never quit.

One of the nation’s oldest practicing physicians, Engleman drives from his San Mateo home to the sprawling medical campus of the University of California at San Francisco three days a week. There he sees about eight longtime patients per week and spends most of his time directing the Rosalind Russell Medical Research Center for Arthritis, an administrative post he has held since it was created in 1979.

“I’m very much opposed to retirement,” said Engleman, an accomplished violinist who plays once a week with a chamber music group. “As long as I’m able intellectually and physically, I’m going to continue.” Engleman, who graduated from medical school in 1937, loves being a doctor and said, “I can do everything I ever did.” His only impediment, he said, is severe spinal stenosis, which has left him stooped and dependent on a cane. “I walk like an old man,” he said.

Informed that Stanford, his undergraduate alma mater, has recently begun requiring doctors older than 75 to be tested, he quipped, “I’m glad they don’t do it here.” But Engleman said that he is not opposed to such evaluations and that he has asked his colleagues to tell him if they believe he is slipping. “By all means, let me know — and I’ll get the hell out of here,” he said he told them.