AIKEN, S.C.  At the sprawling Regional Medical Centers here Sharon Hagan is in the business of recruiting doctors. With nearly a quarter of the town’s population older than 65, she is working to entice internists and primary care physicians to move to this small city, which currently claims only one board-certified geriatrician. 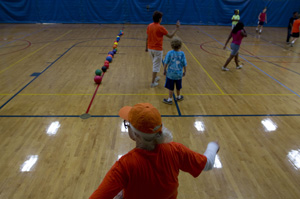 Liliane Crockett, 81, spends four days a week as a foster grandparent. During the summer, she works at the Weeks Center summer recreation program. (Photo by Saskia de Rothschild/Columbia News 21)

“Specialists are hard to find,” says Hagan, the director of development for the area’s only hospital.

When it comes to senior issues, Aiken is in the country’s vanguard. It has already begun to grapple with what the nation as a whole will soon face. By 2050, the proportion of Americans 65 or older is projected to reach 20.7 percent, up from the current 12.6 percent. But in Aiken, it’s already 21.9 percent, giving this town of just more than 29,000 residents near the Georgia border a 40-year head start. The city has shown some foresight about the potential problems and benefits in its future. But as its population continues to age, it still has a lot to figure out.

Aiken, S.C., with nearly 22 percent of the residents aged 65 or older, is taking some innovative approaches to serving the community, but still finds the job daunting.Here’s a look at the city:

Strapped: Meals on Wheels In Aiken Struggles To Serve Amid Budget Cuts

In the 1950s, thousands of workers flocked to Aiken to take jobs at the Savannah River Site, a Department of Energy nuclear refinement plant that’s still one of the area’s main employers. The charming downtown, tree-lined esplanades, low taxes and multiple golf courses caused residents to stick around after retirement and lured other seniors to move here.

“Its geographical location is ideal,” says John Strother, who fell for it when he visited in 2003. “There’s a lot going on. It just has so many pluses.” Aiken, its boosters point out, lies just two-and-a-half hours from mountains, popular beach resorts like Hilton Head and bigger cities like Charleston. They talk about the thriving equestrian community and the county’s 41 polo fields.

Last year Aiken formed a seven-member commission to advise the City Council and Mayor Fred Cavanaugh on senior issues. It has held three introductory, brainstorm-style meetings, and created an agenda of nine areas on which to focus, with transportation and access to health care topping the list.

On the health front, Aiken  like the country as a whole  faces a shortage of doctors who treat the elderly, including geriatricians, internists and primary care physicians. So the hospital offers incentives to lure new doctors to the area, as other underserved communities also do, providing expense reimbursements and guaranteeing them a salary for at least one year while their practices take root. The program has recruited 58 doctors since 2002 and the hospital now has a medical staff of more than 120 physicians. 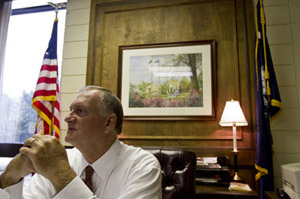 As the head of the Aiken Public Safety Department, Pete Frommer has had to come up with innovative ways to reach seniors. (Photo by Abbey Adkison/Columbia News 21)

“Had those factors not been in place, we would have stayed exactly where we were,” says Dr. Dan Dillon, a neurosurgeon who relocated to Aiken last June from Virginia Beach. He says he was acutely aware of the older demographic before making the move. “Because of the demographic down here, I’m getting 75 percent Medicare patients. I’m not advertising to the elderly, it’s just what walks through the front door.”

The concentration of older patients is one of the factors that makes recruiting difficult. For some physicians that may mean a taxing practice that includes a high number of patients with chronic conditions or complicated medical situations. It also means physicians need to be willing to accept Medicare reimbursements, which doctors often complain are too low for the amount of work involved.

“Physicians want a healthy balance of a payer mix, different types of patients in their practice,” says Hagan.

Hospital administrators hope that perks like warm winters and housing developments built around golf courses, along with the financial perks, will attract more doctors. 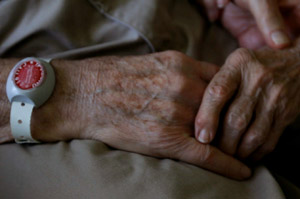 If a dementia patient wanders, his Project Lifesaver bracelet transmits his location, saving the town the cost of a full-blown search. (Photo by Saskia de Rothschild/Columbia News 21)

Aiken has also adopted certain public safety measures and transportation initiatives with an eye toward its seniors:

Despite these efforts, Aiken is still facing difficulties in serving the needs of its senior population. Significant cuts to the county’s Council on Aging  its $2 million operating budget is nearly 30 percent below recent years because of reduced federal and state funding  have diminished its ability to provide meals and transportation, says Scott Murphy, its director. “Every one of the programs and services that we offer, we are maxed out,” says Murphy. “With the economy the way it is, and with the baby boomers retiring now and old people moving into communities, we’ve got the phone ringing off the hook.” But with less revenue, “we are unable to step up and meet those demands.”

That’s why Meals on Wheels staffers such as Sonya Moody are now driving routes in addition to their administrative workloads. There aren’t enough steady volunteers to make all the deliveries; moreover, funds have been cut by 20 percent each year since 2008 leading to a doubling of the waiting list to nearly 650 people. “If there are no volunteers, then I’m out there,” says Moody, who is often greeted with hugs. “The only reason a client does not get a meal is that they’re not home.” 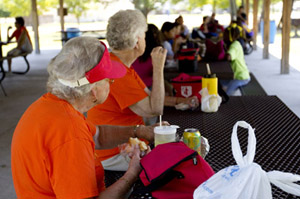 Yet if an aging population presents challenges for the nation, it can also present some opportunities, especially in volunteer efforts, Aiken has found. At the local Red Cross, 45 of its 170 volunteers are seniors; so are about six out of 10 blood donors and many Meals on Wheels drivers.

To help older people pass their wisdom along to younger generations, Aiken has adopted the Foster Grandparents program, which pays seniors $2.65 an hour to read with children during the school year and chaperone summer recreation programs.

“It keeps me busy, it keeps me going, driving, active,” says participant Liliane Crockett, 81. “If I can touch any child’s life, that’s one reason that I’m here.”

S.C. City’s Aging Population Offers A Glimpse Of The Future