Dr. Oliver Korshin, a 71-year-old ophthalmologist in Anchorage, is not happy about the federal government’s plan to have all physicians use electronic medical records or face a Medicare penalty. A few months ago when he applied for an exemption to the latest requirement, he had to pick an exemption category that fit.

“The only one that possibly applied to me was disaster,” Korshin says. “So I picked disaster and I described my disaster as old age and I submitted as my supporting document a copy of my passport.”

Korshin knew that argument probably wouldn’t work, but he still won’t make the switch. Starting next year, the federal government will penalize him – withholding 1 percent of his Medicare payments.

EHR,  ICD-10 and PQRS may sound like alphabet soup. But most doctors around the country know exactly what those acronyms stand for. They are programs championed by the federal government to improve quality and bring medicine into the electronic age. But in Alaska, where small medical practices and an aging physician workforce are common, the new requirements can be a heavy burden. 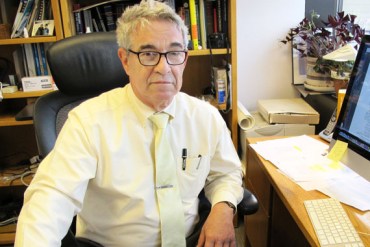 Korshin practices three days a week in the same small office in east Anchorage he’s had for three decades. Many of his patients have aged into their Medicare years right along with him.

Korshin has just one employee, a part-time nurse. And his lease runs out in four years, when he will be 75 and expects to retire.  He says for his tiny practice, an electronic medical records system would cost too much to set up and to maintain.

“No possible business model would endorse that kind of implementation in a practice situated like mine, it’s crazy,” he says.

Korshin will lose another 1.5 percent of his Medicare payments next year for failing to enroll in PQRS, a federal program that requires doctors to report quality data.  And then there is ICD-10, a new coding system for medical bills — also set to take effect in the fall of 2015.

“This flurry of things one has to comply with,” Korshin says, “means that unless you work for a large organization like a hospital that can devote staff and time to dealing with these issues, there’s no economy of scale, I can’t share these expenses with anybody.”

Alaska State Medical Association Executive Director Mike Haugen says half of the doctors in Alaska are over the age of 50 and very few are employed by large organizations.

“Most practices in Alaska are small practices,” Haugen says. “They’re one-, two- and three-doctor practices. The number of really large practices — and that’s relative in Alaska — you can probably count them on one hand.”

Haugen says he hears a lot of complaints from doctors who are feeling overwhelmed by the federal requirements. And he worries the burden is forcing many — especially older doctors — to consider retiring early.

“There won’t be some flashing neon sign we ever see that says ‘X number of doctors have left.’ It’s a very quiet process,” Haugen says. “That for me is the scary part, because you take a look at the medical association membership a year or two from now, and it may be smaller and access to care in this state is a real issue.”

But Rebecca Madison, executive director of Alaska eHealth Network, thinks a lot of doctors would decide to stay in practice if they had help with the transition to electronic health records.

Madison encounters a lot of resistance, but she tries to sell doctors on the benefits. She reminds them electronic records can make their offices more efficient and give them better data on patients. And it will make it easier when it comes time to sell their practices. Madison also sees the issue from the patient’s perspective.

“My whole goal and the reason I got into this process is to give the data to the patient,” she says. “They deserve to have it — it’s their data — they should be able to access it.”

This story is part of a partnership that includes APRN, NPR and Kaiser Health News.