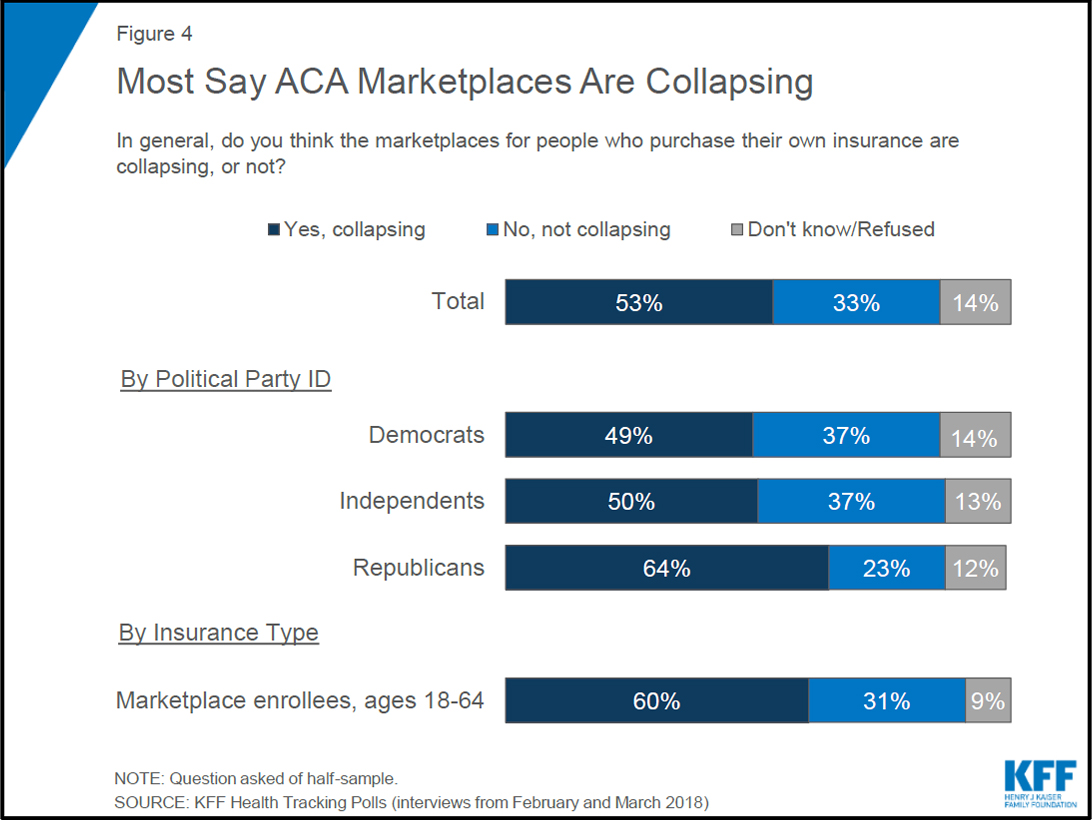 This story can be republished for free (details).
Most Americans are happy with the insurance they buy on the individual market, yet those same people think the markets are collapsing before their eyes.

A poll by the Kaiser Family Foundation, released Tuesday, found that 61 percent of people enrolled in marketplace plans are satisfied with their insurance choices and that a majority say they are not paying more this year compared with last year’s premium costs.

Yet, more than half of the overall public — 53 percent — also think the Affordable Care Act’s marketplaces are “collapsing.” (Kaiser Health News is an editorially independent program of the foundation.)

Experts have warned that some policy actions supported by the Trump administration would undermine the market, including repealing the penalty for going without insurance and giving people the option to buy short-term plans. Such plans are often less expensive but cover fewer benefits. They are not automatically renewable, and insurers are able to charge people with medical conditions more — or exclude them altogether.

But only about one-fifth of people who obtain coverage on the individual market were even aware that the mandate penalty had been repealed as of 2019, according to the poll. It is still in effect this year.

Nine in 10 enrollees said they would still buy insurance without the penalty, and 34 percent said the mandate was a “major reason” they chose to buy insurance at all.

“They may have been prompted to buy the coverage in the first place because of the mandate,” said Sabrina Corlette, a professor at Georgetown University’s Health Policy Institute. “But now that they’ve got it, they clearly value it.”

Most of the people who buy plans because they don’t get coverage through work or the government, 75 percent, said they bought insurance to protect against high medical bills, and 66 percent said peace of mind was a major reason.

In February, President Donald Trump eased some of the restrictions on short-term insurance plans, allowing them to cover people for 12 months instead of three.

Critics worried this alternative would draw people away from traditional insurance plans and weaken the individual market. According to the poll, though, only 12 percent of respondents buying on that market said they’d be interested in buying one of the short-term plans.

Georgetown’s Corlette cautioned that these numbers could change when people are faced with an actual choice next open enrollment season.

“If you look at how these things are marketed, your average consumer will not be able to tell that these products are any different from a traditional health plan,” she said.

That’s not surprising, said Joseph Antos, a resident scholar at the conservative American Enterprise Institute who follows the health industry. Many consumers saw their premium subsidies rise too.

Thirty-five percent of people said one of the major reasons they bought insurance was because government subsidies made it affordable.

The subsidies that people receive, Antos noted, went up to offset the premium increase in many cases, especially if consumers took the advice of experts and shopped around for coverage.

“They’re buying because they feel they need insurance and that their net premiums and deductibles add up to something they’re willing to buy,” Antos said.