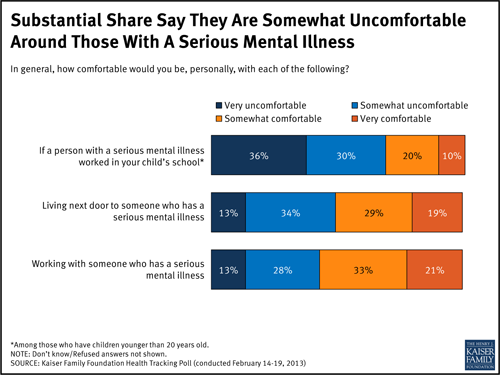 The public has a contradictory view of mental illness, according to a new poll. While most Americans believe people with such ailments are the victims of prejudice and discrimination, a substantial portion of the public say they have qualms about working in the same place or having their children attend a school where someone with a “serious” mental illness is employed.

Seventy-six percent of Americans believe the mentally ill experience discrimination, according to the poll from the Kaiser Family Foundation. (KHN is an editorially independent program of the foundation.) That was a greater portion of Americans than those who said they thought discrimination burdens people with HIV or AIDS; Hispanics; blacks; people with physical disabilities, or women. Immigrants were the only group to rank higher than those with mental illness.

The poll questions were prompted by the Newtown, Conn.,  elementary school shooting on Dec. 14 and the subsequent debate about whether stronger gun control laws and better mental health services might prevent similar attacks.

The poll also found a post-election drop in popularity for the 2010 health care law, which had been narrowly more popular than not in November. This month, 42 percent of Americans expressed an unfavorable opinion of the law and 36 percent said had a favorable opinion. Another 23 percent either said they didn’t know or refused to answer the question—the most that dodged the issue in the nearly three years that Kaiser has been testing public perceptions about the law. The pollsters attributed the change to a drop in support among Democrats.