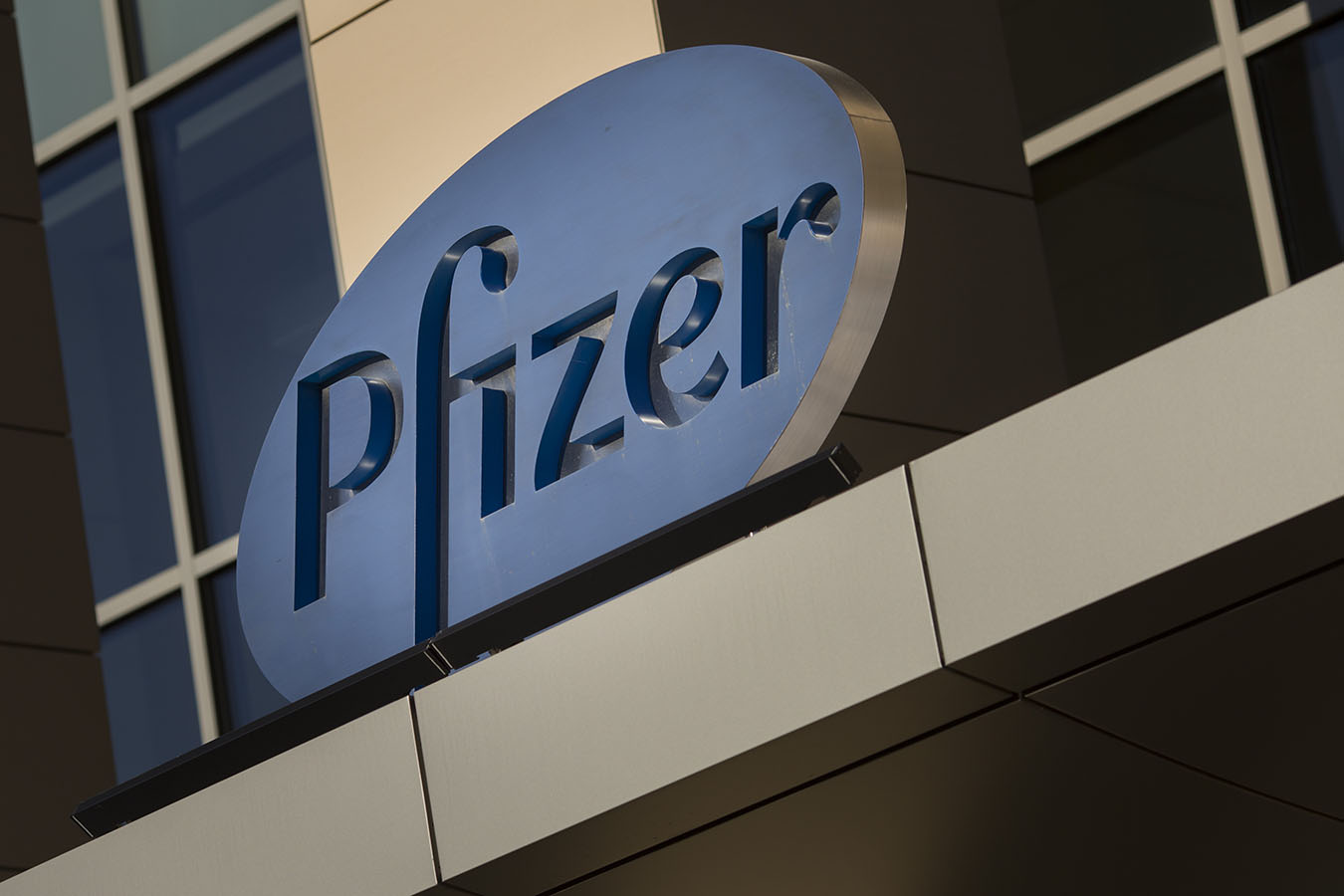 Renda Brower knows well the cost of drugs to treat rheumatoid arthritis – her husband, son and daughter all have the painful, disabling autoimmune disease. And the family’s finances revolve around paying for them.

Even with insurance, Brower’s family last year faced $600 a month in copayments for the drug, plus additional payments on another $16,000 in medical bills racked up in 2016 when a former insurer refused to cover all the doses her 9-year-old daughter needed.

Brower, of Warsaw, Ind., said her family tries to keep up with prices by cutting back on her children’s sports and extracurriculars and skipping family vacations. She also works as a part-time teacher.

But financially, it’s hard. “The cost should not be this high,” she said.

Wholesale prices for Humira and Enbrel, the two most commonly used treatments for rheumatoid arthritis, known as RA, increased more than 70 percent in the past three years.

Since the first RA drug came to market a decade ago, nearly a dozen have been added. If basic economics prevailed, RA treatments and patients would have benefited from competition. But, because of industry price-setting practices, legal challenges and marketing tactics, they haven’t. The first RA drug cost $10,000 a year. It now lists for more than $40,000 — even as alternatives have entered the U.S. market.

Humira is the world’s No. 1 prescription drug by revenue. AbbVie manufactures and markets the drug and is on track to reach revenue from the product of $17 billion this year.

Other RA treatments are also among the top 10 drugs by revenue sold in the U.S. Enbrel, made by Amgen, ranks as No. 3. Remicade, by Janssen Biotech, is fifth. Some RA medications are approved for other conditions, including psoriatic arthritis, Crohn’s disease and psoriasis. 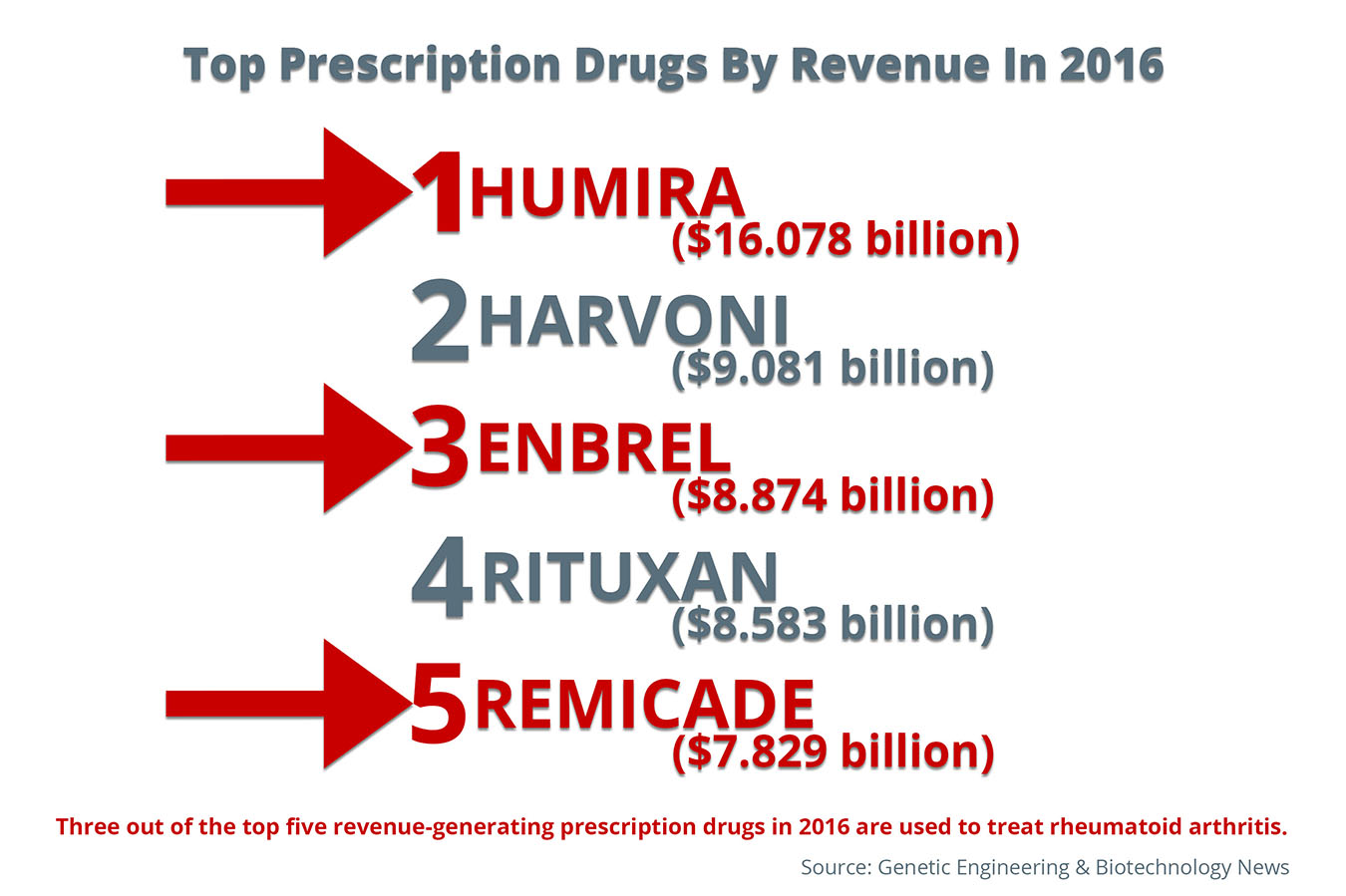 About 1.5 million Americans have rheumatoid arthritis. The Brower found some relief this year but not because prices dropped. Rather, Renda’s husband left his job at an engineering firm to work as a machinist at a medical device company that has an insurance plan with lower copayments. Her daughter was accepted into a clinical trial at Cincinnati Children’s Hospital. The trial covers the drug’s cost but not the associated expense of weekly travel, among other things.

The complicated pharmaceutical supply chain in the United States means middlemen — such as pharmacy benefit managers (PBM) and, in some cases, hospitals and doctors’ offices — can gain financially by choosing more expensive drugs. That’s because PBMs usually get a rebate from the drugmakers on top of whatever profit they get from selling or administering the drug.

Those rebates often are based on a percentage of the list, or wholesale, price. So, the middlemen who get the rebates take in more money when drugmakers raise those sticker prices.

But who pockets the rebates? PBM firms, which oversee drug benefits for millions of Americans, say they share all or part of them with the insurers or employers who hire them. In some cases, the rebates go directly to specialty pharmacies, medical clinics or physicians dispensing the treatments.

The rebates rarely end up directly in patients’ pockets.

Those rebates affect the market in another way: They can make it harder for some companies to offer new treatments or they can thwart less costly rival products.

“We could give [our new drug] away for free and … it would still be more economically advantageous” for insurers and PBMs to send patients to Humira first, said Andreas Kuznik, a senior director at Regeneron Pharmaceuticals, at a conference examining the cost and value of RA treatments.

Thomas Amoroso, medical director for medical policy at Tufts Health Plan, said at the same March conference that he has found drug industry sales representatives to be persistent in tracking how their drugs are positioned on plan formularies.

If insurers decide to add a new, lower-cost drug as the preferred alternative, “our Humira rep would be knocking on our door next week and saying, ‘Hey, that rebate we gave you? We’re taking it back,’” Amoroso said.

The roundtable at which they spoke was part of an assessment of RA drug pricing convened by the Institute for Clinical and Economic Review, a nonprofit that evaluates the value of medical tests and treatments for insurers and other clients.

PBMs won’t disclose the rebates they provide to clients, but studies provide a clue. It’s a huge amount of money.

The Berkeley Research Group, a consulting firm that advises major employers, said that rebates and other discounts paid to insurers, PBMs and the U.S. government for brand-name drugs grew from $67 billion in 2013 to $106 billion in 2015.

Most RA drugs are a complex type of medication, called biologics, which are made in living organisms. Nearly identical copies of biologics are called biosimilars. They hold the promise of lower prices, just as generic drugs did for less complex medications.

While several biosimilar RA treatments have won Food and Drug Administration approval, including replicas of Humira, Enbrel and Remicade, most are tied up in court battles over patents. And those biosimilars that have made it to market are now the subject of new areas of legal challenge.

In mid-September, Pfizer filed what will be a closely watched antitrust lawsuit against Johnson & Johnson. The case alleges that J&J is using exclusionary contracts and the threat of withdrawing rebates to protect Remicade from Pfizer’s lower-priced biosimilar, Inflectra, which hit the market last winter.

J&J defends its contracts, saying they are “driving deeper discounts that will lead to overall lower costs.”

Arguments For And Against Rebates

Rebates are under increasing scrutiny, amid growing alarm about soaring prescription drug prices in the United States. But the Pharmaceutical Care Management Association, the PBM industry’s trade lobby, said that complaints that rebates help fuel higher prices are unfounded.

These rebates, the lobby says, help save the health system millions of dollars by shifting dollars back to insurers or other clients, who can then use them to lower future premium increases. This year, it commissioned a study that found no correlation between rebates and the rising list prices of the top 200 brand-name drugs, suggesting higher rebates didn’t necessarily drive higher prices.

Express Scripts offers clients an option to give patients the discount directly, but most choose not to, he said.

“While individual patients would get the benefit, everyone else’s premiums would go up [because the rebate savings would not flow back to the insurer],” Miller said. “Changing where the rebate goes doesn’t lower the price of the drug.”

But rebates play a role in what some patients pay at the pharmacy counter.

It stems from a simple calculation: whether a patient’s insurance copayment is based on a percentage of the drug’s wholesale price or the drug’s price after rebates are given to the middlemen.

Heidi Barrett , a mother of five from Everett, Wash., faces a 10 percent copay whenever she or one of her four children who have RA, all of whom have been on medication for years, go for their monthly infusion of Remicade.

Although Barrett is shielded from much of the cost because she has good employer-based insurance through her husband’s job, the question of whether her monthly copayments are based on the wholesale price or the after-rebate price rankles her.

“I have asked that question of the insurance company. I’ve asked that of our union,” said Barrett, 47, a paralegal who isn’t working because she spends so much time on her children’s treatments. “I never got any answers back.”

Based on data analyzed by Bach’s group at Sloan Kettering to determine the cost of 100 milligrams of Remicade, it appears she is paying based on the pre-rebate price.

Here’s how that works: Barrett’s 18-year-old son recently received a 600 mg dose that required a copay of $655. That is close to 10 percent of Remicade’s average U.S. wholesale price for that dose of $6,450, the Bach analysis showed.

Barrett is not benefiting from the rebate that middlemen receive.

Rebates and discounts, however, drive down the price for pharmacy benefit managers, hospitals or doctors.

According to the analysis, the average net cost of a 600 mg dose is $4,140, once all discounts are calculated. If Barrett could use that base price as her copay, she would save more than $240. For her entire family — all her children and Barrett take similar doses — that equals a savings of $1,000 a month.

With her current insurance, Barrett quickly meets a yearly $12,900 deductible. She considers herself lucky that her insurer then picks up the drug’s full cost. But the experience has changed her motherly advice to her children, who are 10, 18, 19 and 25, about what to hope for in life.

“I tell them, you can be anything you want when you go grow up. But you need to go to a company with good health insurance, even before you look at the salary or whether you’ll be happy there, your first priority is health insurance,” Barrett said. “It’s an insane world we live in.”