While developing a rapid test that detects the coronavirus in someone’s saliva, Blink Science, a Florida-based startup, heard something startling: The Food and Drug Administration had more than 3,000 emergency use authorization applications and didn’t have the resources to get through them.

“We want to try to avoid the EUA quagmire,” said Peb Hendrix, the startup’s vice president of operations. Its test is still in early development. On the advice of consultants, the company is weighing an alternative route through the FDA to the U.S. market.

“It’s just the way our government works,” Hendrix said, which is a challenge for businesses that are “anxious to get started and think they’ve got something that can help.”

The U.S. produced covid-19 vaccines in record time, but, nearly two years into the pandemic, consumers have few options for cheap tests that quickly screen for infection, though they are widely available in Europe. Experts say the paucity of tests and their high prices undermine efforts in the U.S. to return to normal life.

Some experts say the FDA’s approach to clearing rapid tests has been onerous and overly focused on exceptional accuracy to detect positive results, rather than on what would really benefit people en masse: speedy results. The main use of rapid tests is to screen people so they can safely attend work, school, meetings or gatherings. This screening can then be followed up with a more sensitive, lab-based polymerase chain reaction (PCR) test for diagnosis.

The FDA has authorized just 12 over-the-counter options for rapid tests. But the problems go beyond that agency: The Biden administration recently put $3 billion toward boosting the supply of rapid tests, but public health and industry experts say the government didn’t move quickly enough early in the pandemic to support development and manufacturing.

“Should we have had an equivalent of Operation Warp Speed for testing?” asked Mara Aspinall, a co-founder of life sciences fund BlueStone Venture Partners and a board member for OraSure Technologies, which received FDA authorization for an over-the-counter rapid test. “Absolutely. … For too long, people thought of testing as an extra and not the core, and it needs to be thought of as the core.”

During the pandemic, the FDA has received more than 4,500 emergency use authorization and related requests for covid tests, according to FDA spokesperson Jim McKinney. The agency says it is prioritizing reviews of at-home and point-of-care tests that can be produced in high volumes. Two recently authorized tests alone could boost availability by as much as 13 million tests a day, McKinney said, adding that it would “efficiently review the submissions that will have the biggest impact on the nation’s testing needs.”

In addition to the slow pace of approvals, manufacturing bottlenecks created by materials and labor shortages are keeping prices high. Prices of rapid tests range from $14 for a two-pack to well over $50 a test, far from affordable for regular use.

The FDA says it can’t move more quickly as it balances ensuring that safe and useful devices reach the marketplace with the urgent need to deliver options for widespread daily testing. 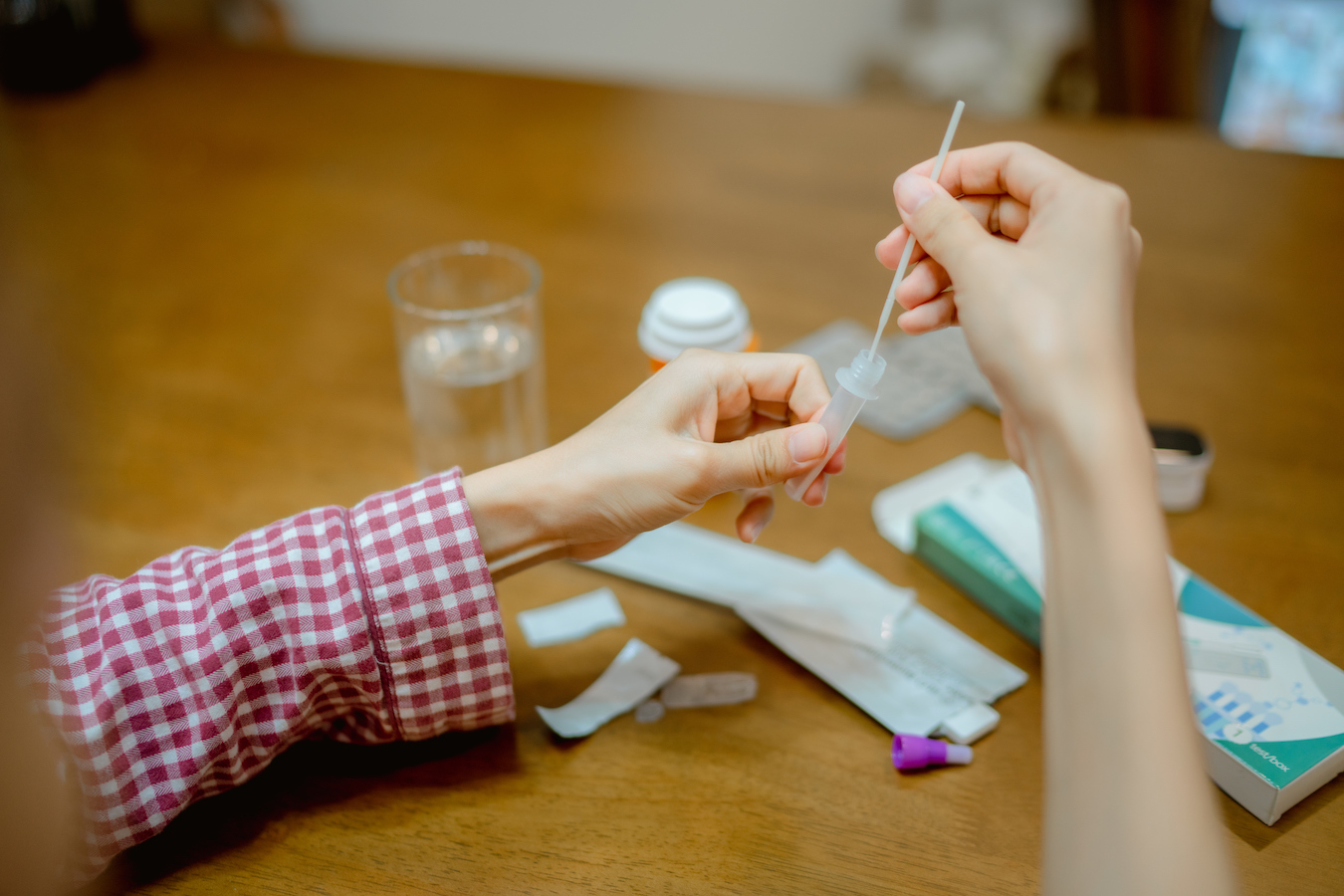 The promising antiviral drugs to treat covid can halt hospitalizations and deaths, but only if they’re given to patients within three to five days of their first symptoms, a narrow window many people won’t meet. Here’s why.

“The FDA carefully weighs the known and potential risks and … benefits of emergency use authorization for COVID-19 diagnostic tests based on sound science,” McKinney said in response to questions. But he noted many submissions “are incomplete or contain insufficient information.”

Startups said navigating the ins and outs of this regulatory apparatus is daunting. E25Bio of Cambridge, Massachusetts, is developing a low-cost antigen test, which detects covid by identifying proteins called antigens. Since July 2020, the company has repeatedly adjusted its FDA application as the agency updates its recommendations. The requirement that test results be reported directly to federal health authorities has added to delays.

“As a smaller company, we didn’t have the capabilities to develop that technology at first,” said Bobby Brooke Herrera, co-founder and chief science officer. E25Bio now has a mobile app that verifies results and sends the anonymized data to public health authorities.

Herrera hopes to sell the over-the-counter rapid test in the U.S. for less than $5, cheaper than anything currently on the market.

Hendrix said Blink Science is considering a different path to FDA approval. Known as de novo, it can be used to bring novel, low-risk medical devices to market. For now, he said, the company is likely to prioritize approval in developing countries where vaccination rates are much lower than in the U.S.

Steradian Technologies, which hopes to launch a 30-second breath test, says it was told by regulatory consultants and others who ran into snags in the EUA process that it “might not be worth it” because the agency is so backed up, according to Tra Tran, the company’s director of development and clinical affairs. The FDA’s regular approval process might be the best option.

“We don’t have the budget to spend on doing an EUA and then being told, ‘Well, actually you wasted six months and hundreds of thousands of dollars,’” she said. “Only certain people have the capital to be able to afford staying in this FDA regulatory process for forever.”

Several public health experts and people in the testing industry said that the Biden administration’s recent moves will help supply but that meeting demand will take time.

Australian test-maker Ellume received $232 million in federal funds in February to boost U.S. manufacturing of its rapid at-home test, but the company says its new plant in Frederick, Maryland, won’t start production until December. It could eventually manufacture 15 million tests a month.

The FDA authorized Ellume’s over-the-counter covid test in December 2020, but the road has been rocky: The company recalled 2.2 million tests in the U.S. because of “higher-than-acceptable false positive” results, the FDA said, and the FDA warned that their use “may cause serious adverse health consequences or death.” All came from Ellume’s Australian facility.

IHealth Labs, which received FDA authorization Nov. 5 for a test priced at $14 for a two-pack, says that by January it will be able to make 200 million tests a month.

Scott Gleason, OraSure’s interim chief financial officer, said the company faces headwinds at its plant in Pennsylvania’s Lehigh Valley. “We’re having some challenges with hiring enough people to work in our factories to meet the demand,” he said. A two-pack has recently retailed between $14 and $24, and that price won’t drop anytime soon, Gleason said.

Ellume has faced shortages of swabs, steel for its facility and electronics components for the tests.

The View From the FDA

The FDA has authorized more than 400 covid tests, including at-home options and those processed by a medical provider or a lab. The FDA is still getting more than 100 EUA submissions for covid tests per month, many from overseas. But, McKinney said, the vast majority are not for the type most needed now: tests for over-the-counter use.

The FDA may be reluctant to ease its scrutiny. The pandemic’s first-iteration rapid tests, like Abbott Laboratories’ ID Now, raised safety and accuracy concerns, and the FDA has sent warning letters to at least six companies selling bogus rapid tests and has issued numerous recalls. Separately, the agency put over 260 tests that detect covid antibodies on a “do not use” list.

“If we did to antigen tests what happened with antibody tests, we would completely destroy the credibility of the test,” said Aspinall, the venture capitalist. “As frustrating as this is, I have to respect the FDA for ensuring that we continue to have quality tests.”

The agency’s review times for covid test EUA applications have improved, according to an assessment by consulting firm Booz Allen Hamilton. Approvals were generally cleared faster than denials. As of March, the median time for the FDA to grant authorization was seven days and 38 days for denials. When the country isn’t in a national emergency, getting through the FDA’s reviews might take months or years.

Nonetheless, the bottlenecks are felt by Americans trying to keep their employees and families safe.

LabCentral — a biotech co-working facility in Cambridge, Massachusetts, that was part of E25Bio’s testing study — requires participating startups to test workers twice a week. That’s a costly safety measure for a nonprofit, said Celina Chang, LabCentral’s vice president, so it recently bought rapid tests from Germany for $1.50 each.

“In order to test people twice a week on a regular basis for months on end,” she said, “we need it to be, just the same as anyone, affordable.”