This story also ran on PolitiFact. It can be republished for free.

Joe Biden ran on an expansive health care platform during his 2020 presidential campaign, with a broad array of promises such as adding a government-sponsored health plan to the Affordable Care Act and lowering prescription drug prices. Perhaps most significantly, he pledged to get control of the covid pandemic that claimed more than 400,000 American lives by Inauguration Day.

President Biden now faces major challenges in accomplishing his health care agenda; among the biggest will be bridging partisan divides in both Congress and the nation at large. 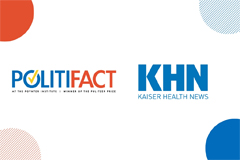 Even with the Democrats’ newfound majority in the Senate — the result of victories by the Rev. Raphael Warnock and Jon Ossoff in Georgia’s runoff elections — differences in health policy between the party’s moderate and progressive wings will persist.

“With razor-thin Democratic majorities in both the House and the Senate and many other priorities in addition to health care, Biden is unlikely to succeed in accomplishing all of his health agenda,” said Larry Levitt, executive vice president for health policy at the KFF. (KHN is an editorially independent program of KFF.)

Still, Democratic control of the Senate will allow Biden to pursue some of his health care priorities “using a two-pronged strategy of legislation and executive actions,” Levitt said.

PolitiFact and KHN teamed up to analyze Biden’s promises during the 2020 presidential campaign and will monitor his policies over the next four years to see which ones materialize. But, for now, as Biden settles into the West Wing, what are his chances of making progress on health care?

In his first 100 days in office, Biden has promised to get 100 million doses of covid vaccine in the arms of Americans and — if Congress provides the funds to do so — get all kids back into schools safely. He asked people to wear face masks in public for those 100 days. He also has repeatedly promised he would get the covid pandemic under control.

Other covid promises include a pledge to double the number of drive-thru testing sites and create a national pandemic testing board. He said he wants to invest $25 billion in covid vaccine distribution and to ensure that every American has access to the vaccine at no cost. He’s also promised to use the Defense Production Act to ramp up personal protective equipment supplies and restore national stockpiles.

During his first two days in office, Biden took steps to accomplish these goals, using executive orders to put in place masking mandates regarding federal buildings and interstate travel — for example, in airports and on commercial aircraft, trains, ferries and intercity bus services — and re-engaging the United States with the World Health Organization. He also issued orders to create a covid response coordinator who will lead the federal government’s efforts for providing vaccination, testing and supplies, set up a national pandemic testing board, establish international travel protocols, use the Defense Production Act to provide necessary supplies and ensure minority communities are provided resources to combat the disease. The White House released a 200-page plan on Thursday that outlines the Biden administration’s strategy to address the covid-19 pandemic.

Some members of his covid leadership team — such as Jeff Zients, tapped to coordinate the White House’s covid response, and Dr. Rochelle Walensky, who will lead the Centers for Disease Control and Prevention — don’t require Senate confirmation, meaning they can get to work right away. But Biden’s pick for Health and Human Services secretary, Xavier Becerra, will need approval by the Senate, a step that will likely be eased because of Democrats’ Georgia victories. Still, how his nomination plays out — as well as Biden’s other selections for posts that require confirmation — could be an early sign of whether the new administration will face strong partisan resistance.

While the executive orders are strong signals of what Biden hopes to accomplish, he will need Congress to fund his plans to expand testing and vaccine distribution. Biden outlined the week before his inauguration in a $1.9 trillion proposal to address covid and the economy. However, the president could face difficulty in getting bipartisan agreement on this plan, with some Republicans criticizing it as too expensive.  It took Congress seven months to pass a second covid relief bill in December.

Other limiting factors include whether the supply of vaccine is adequate to reach 100 million doses and whether organized efforts are put in place to increase testing and ramp up production, said Dr. Georges Benjamin, executive director of the American Public Health Association.

One area in which Biden could face pushback: mask-wearing. Even though he has already issued executive orders regarding mask use in federal buildings, for instance, broader mask mandates fall under individual governors’ authority, and some Republican state executives remain resistant.

Even if Biden makes inroads on that front, Americans will have to accept this step as part of their daily lives. A December KFF survey showed that while most Americans, regardless of party, wear a mask whenever they leave their house, there is still a lag among Republicans.

“I think Biden’s biggest challenges in fulfilling his covid goals are in bringing a divided country together with the bully pulpit of the presidency,” said Levitt. “If testing and the vaccine and mask-wearing are successful in only blue America, then it will be hard to succeed overall.”

As Barack Obama’s vice president, Biden was instrumental in the enactment of the Affordable Care Act, which expanded health insurance coverage to millions of people but has drawn fierce Republican opposition.

Biden’s health agenda promises to expand the ACA and undo many of the steps taken by President Donald Trump to dismantle it.

“I’ll not only restore Obamacare, I’ll build on it. You can keep your private insurance. If you like it, you can choose a Medicare-like public option,” Biden said during a campaign event in Pittsburgh on Nov. 2.

Adding a government-run public option to other ACA health care plans is one of Biden’s most ambitious pledges. It’s a controversial idea even within the Democratic caucus, where some members want instead to move to a single-payer health plan like “Medicare for All.” Remember the debates during the Democratic presidential primary?

Health policy experts we consulted said implementing a public option seems extremely unlikely in the current environment. So does lowering the Medicare eligibility age from 65 to 60, another divisive idea among Democrats. But both moderates and progressives — even lawmakers across the aisle — might be able to come together on initiatives that could shore up the ACA and make coverage more affordable, such as expanding eligibility for premium subsidies.

Biden doesn’t need Congress to restore parts of the ACA that were changed via regulations issued by the Trump administration. He can instruct agencies to issue new rules that would reverse such Trump initiatives as allowing states to implement work requirements for some adults who gained Medicaid coverage in the ACA expansion of that program. Still, regulatory changes take time. And, in some cases, altering them can be complicated.

Take, for instance, the Trump administration’s rules promoting short-term or association health plans. That metaphorical cat is already out of the bag, said Joseph Antos, a health care scholar at the American Enterprise Institute.

“There are a lot of people insured through those plans and so [changing that policy is] a very tricky thing,” said Antos. “I don’t think it would be wise for him to do anything to reverse that [rule] even though there has been a lot of noise from the left.”

In Antos’ view, the main advantage in gaining Senate control will be helping speed confirmation for key nominations, “which opens the door to new thinking on regulations.”

On the campaign trail, Biden made clear his intent to bring down prescription drug prices. He promised to lower costs by 60%. Among the related policy ideas he floated: repealing the law that bars Medicare from negotiating lower drug prices and allowing the importation of prescription drugs from other countries.

But details of these proposals aren’t yet available, leaving some experts to question their feasibility.

Of course, the pharmaceutical lobby won’t be enthusiastic about any drug pricing legislation and would likely mount an aggressive campaign to defeat it. And just as with any other proposal, there will be the hurdle of getting Congress to agree on what to include in a drug pricing bill. Plus, given the rapid development of covid vaccines, Capitol Hill may be more sympathetic to the drug industry.

But Stacie Dusetzina, an associate professor of health policy at Vanderbilt University, said it’s possible Biden could succeed in lowering drug prices by limiting drug price increases to the rate of inflation and capping out-of-pocket spending for seniors covered by Medicare.

Both the House and Senate included similar proposals in past drug pricing bills, she said, and “those are both things I think could legitimately move forward, if anything moves forward.”