The federal government has eased its annual punishments for hospitals with higher-than-expected readmission rates in an acknowledgment of the upheaval the covid-19 pandemic has caused, resulting in the lightest penalties since 2014. 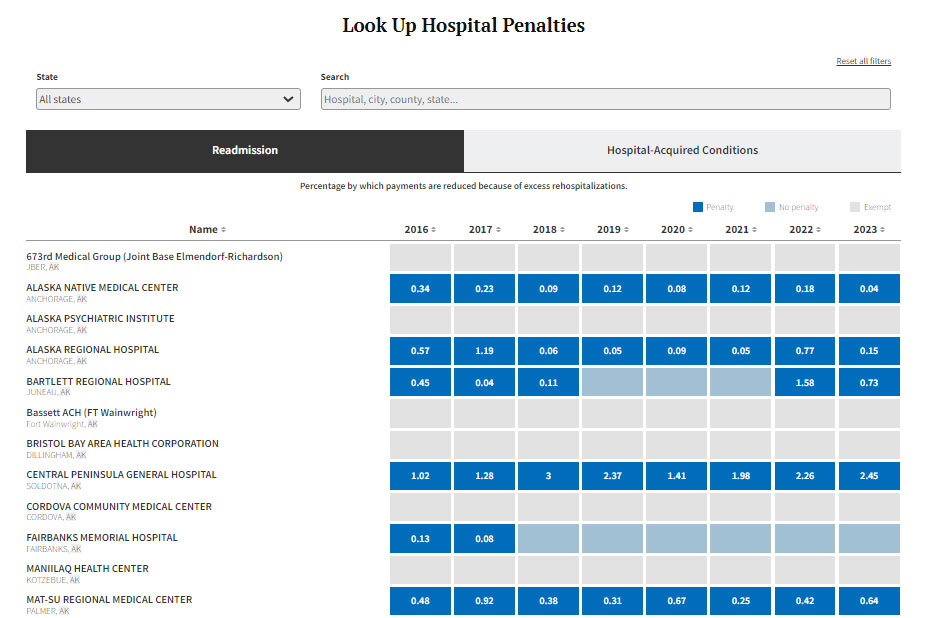 Here are the hospitals hit with readmissions penalties for 2023. You can filter by location, hospital name or year.

The Hospital Readmissions Reduction Program has been a mainstay of Medicare’s hospital payment system since it began in 2012. Created by the Affordable Care Act, the program evaluates the frequency with which Medicare patients at most hospitals return within 30 days and lowers future payments to hospitals that had a greater-than-expected rate of return. Hospitals can lose up to 3% of each Medicare payment for a year.

The pandemic threw hospitals into turmoil, inundating them with covid patients while forcing many to postpone elective surgeries for months. When the Centers for Medicare & Medicaid Services evaluated hospitals’ previous three years of readmissions, as it does annually, the government decided to exclude the first half of 2020 because of the chaos caused by the pandemic. CMS also excluded from its calculations Medicare patients who were readmitted with pneumonia across all three years because of the difficulty in distinguishing them from patients with covid.

Akin Demehin, senior director of quality and patient safety policy at the American Hospital Association, said the changes were warranted. “The covid pandemic did a lot of really unprecedented things to care patterns of hospitals,” he said.

After making those changes, CMS evaluated 2½ years of readmission cases for Medicare patients who’d had heart failure, heart attacks, chronic obstructive pulmonary disease, coronary artery bypass grafts, and knee and hip replacements. As a result of its analysis, CMS penalized 2,273 hospitals, the fewest since the fiscal year that ended in September 2014, a KHN analysis found.

The average payment reduction was 0.43%, also the lowest since 2014. The reductions will be applied to each Medicare payment to the affected hospitals from Oct. 1 through next September and cost them $320 million over that 12-month period.

Some hospitals will see their penalties greatly reduced from last year. The penalty on St. Mary’s Hospital in Athens, Georgia, is dropping from 2.54% to 0.06%. Saint Joseph East in Lexington, Kentucky, received the maximum penalty, 3%, last year; it will lose 0.78% as of Oct. 1. In Flemington, New Jersey, the penalty for Hunterdon Medical Center is dropping from 2.29% to 0.12%.

To limit penalties, many hospitals in recent years have instituted new strategies to keep former patients from needing a return visit. Dr. Robert Coates, interim chief medical officer at Hunterdon Health, which owns Hunterdon Medical Center, said in a statement that the hospital set up a system to identify patients who visited the emergency room within 30 days of a hospital stay. Instead of readmitting them, Hunterdon helps them set up next-day appointments at a doctor’s office or home monitoring of their health. Hunterdon also calls all discharged patients to ensure they have filled their prescriptions and had a follow-up visit with a clinician within a week of leaving the hospital.

Dr. Jessica Satterfield, director of quality and clinical excellence at St. Mary’s Health Care System, which operates St. Mary’s Hospital, said in a statement that the hospital identified patients at risk of readmission when they were first admitted and focused on making sure that their medications were correct and that they had follow-up visits. “We are proud that our efforts are bearing fruit in the form of greatly reduced penalties but, more importantly, as a reflection of the exceptional care our staff and medical staff provide to our patients,” Satterfield said.

Saint Joseph East did not respond to emails seeking comment.

Despite the changes, 43% of the nation’s 5,236 hospitals were penalized. Of the unpenalized, all but 770 were automatically exempted. The 2,193 exempted hospitals include those that specialize in children, psychiatric patients, or veterans. Rehabilitation and long-term care hospitals are also excluded from the program, as are critical access hospitals, which Medicare pays differently to help them stay open in areas with no other hospitals. The government also exempted Maryland hospitals because that state has a special payment arrangement with Medicare. Of the hospitals that Medicare assessed, 75% were penalized.

For the fiscal year that started this month, Medicare also cited the pandemic in giving hospitals a reprieve from its other major quality-focused effort that assesses penalties: the Hospital-Acquired Condition Reduction Program. It slashes Medicare payments by 1% to the quarter of general hospitals with the highest rates of infections and other potentially preventable patient injuries. For the previous fiscal year, CMS punished 764 hospitals under that program. Those penalties — which would have cost hospitals an estimated $350 million this year — will resume next fiscal year, with adjustments that better take covid patients into account. CMS will also refine the readmissions penalty program to distinguish pneumonia patients from covid patients.

“Covid has been a tremendously disruptive force for all aspects of health care, most certainly CMS’ quality measurement programs,” Demehin said. “It’s probably going to be a couple of volatile years for readmission penalties.”