Long Island dermatologist Kavita Mariwalla knows well how to treat acne, burns and rashes. But when a patient came in with a potentially disfiguring case of bullous pemphigoid—a rare skin condition that causes large, watery blisters—she was stumped. 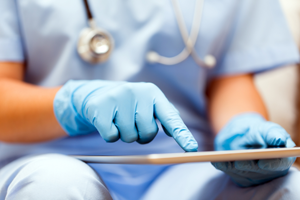 The medication doctors usually prescribe for the autoimmune disorder wasn’t available. So she logged in to Modernizing Medicine, a Web-based repository of medical information and insights, for help.

Within seconds, she had the name of another drug that had worked in comparable cases.

“It gives you access to data, and data is king,” she said of Modernizing Medicine. “It’s been very helpful especially in clinically challenging situations.”

The system, one of a growing number of similar tools around the country, lets her tap into the collective knowledge of 4,000 providers and 13 million patients, as well as data on treatments other doctors provide patients with similar profiles. Then it spits out recommendations.

Tech titans like Google, Facebook, Microsoft and Apple already have made huge investments in artificial intelligence to deliver tailored search results and build virtual personal assistants. That approach is starting to trickle down into health care too, thanks in part to the push under the health reform law to leverage new technologies to improve outcomes and reduce costs, and to the availability of cheaper and more powerful computers.

Computers can’t replace doctors at the bedside, but they are capable of crunching vast amounts of data and identifying patterns humans can’t. Artificial intelligence can be a tool to take full advantage of electronic medical records, transforming them from mere e-filing cabinets into full-fledged doctors’ aides that can deliver clinically relevant, high-quality data in real time.

“Electronic health records [are] like large quarries where there’s lots of gold, and we’re just beginning to mine them,” said Dr. Eric Horvitz,  who is the managing director of Microsoft Research and specializes in applying artificial intelligence in health care settings.

Increasingly, physician practices and hospitals around the country are using supercomputers and homegrown systems to identify patients who might be at risk for kidney failure, cardiac disease or postoperative infections and to prevent hospital readmissions, another key focus of health reform.

And they’re starting to combine patients’ individual health data—including genetic information—with the wealth of material available in public databases, textbooks and journals to help come up with more personalized treatments.

For now, the recommendations from Modernizing Medicine are largely based on what is most popular among fellow professionals—say, how often doctors on the platform prescribe a given drug or order a particular lab test. But next month, the system will display data on patient outcomes that the company has collected from its subscribers over the past year. Doctors will also be able to double-check the information against the latest clinical research by querying Watson, IBM’s artificially intelligent supercomputer.

“What happens in the real world should be informed by what’s happening in the medical journals,” said Daniel Cane, CEO of Florida-based Modernizing Medicine. “That information needs to get to the provider at the point of care.”

Using homegrown systems, doctors  at Vanderbilt University Medical Center in Nashville and St. Jude’s Medical Center in Memphis  are getting pop-up notifications—not unlike those on an iPhone—within individual patients’ electronic medical records.

The alerts tell them, for instance, when a drug might not work for a patient with certain genetic traits. It shows up in bright yellow at the top of a doctor’s computer screen – hard to miss.

“With a single click, the doctor can prescribe another medication. It’s a very quick and seamless process,” said Vanderbilt’s Dr. Joshua Denny, one of the researchers who developed  the system there.

Denny and others used e-medical records on 16,000 patients to help computers predict which patients were likely to need certain medications in the future.

Take the anti-blood clot medication Plavix. Some people can’t break it down. The Vanderbilt system warns doctors to give patients likely to need the medication a genetic test to see whether they can. If not, it gives physicians suggestions on alternative drugs.

Doctors heed the computer’s advice about two-thirds of the time, figuring in for example, the risks associated with the alternative medication.

“The algorithm is pretty good,” says Denny, referring to its ability to predict who’s going to need a certain drug. “It was smarter than my intuition.”

So far, computers have gotten really good at parsing so-called structured data—information that can easily fit in buckets, or categories. In health care, this data is often stored as billing codes or lab test values.

But this data doesn’t capture patients’ full-range of symptoms or even their treatments.  Images, radiology reports and the notes doctors write about each patient can be more useful. That’s unstructured data, and computers are less savvy at handling it because it requires making inferences and a certain understanding of context and intent.

That’s the stuff humans are really good at doing — and it’s what scientists are trying to teach machines to do better.

Computers are getting better at reading unstructured information. Suppose a patient says he doesn’t smoke. His doctor checks ‘no ‘ in a box–structured data, easily captured by a machine.

But then the  doctor notes that the patient’s teeth are discolored or that there are nicotine stains on his fingers— a clue that the patient in fact does smoke.  Soon a computer may be able to highlight such discrepancies, bringing to the fore information that otherwise might have been  overlooked.

In recent years, universities, tech companies and venture capital firms have invested millions into making computers better at analyzing images and words. Companies are popping up to capitalize on findings in studies suggesting that artificial intelligence can be used to improve care.

“Artificial intelligence–ultimately that’s where the biggest quality improvements will be made,” said Euan Thomson, a partner at venture capital firm Khosla Ventures.

But many challenges remain, experts say. Among them is the tremendous expense and difficulty of gaining access to high-quality data and of developing smart models and training them to pick up patterns.

Most electronic medical record-keeping systems aren’t compatible with each other. The data is often stored in servers at individual clinics or hospitals, making it difficult to build a comprehensive reservoir of medical information.

Moreover, the systems often aren’t hooked up to the Internet and therefore can’t be widely distributed or accessed like other information in the cloud. So, unlike the vast amount of data on Google and Facebook, the information can’t be mined from anywhere by those interested in analyzing it.

From the perspective of privacy advocates, this makes some good sense: A researcher’s treasure trove is a hacker’s playground.

“It’s not the greatest time to talk about” health records on the web, given security scandals such as the Edward Snowden leaks and the Heartbleed bug, said Dr. Russ Altman, the director of Stanford University’s biomedical informatics training program.

Also standing in the way are concerns about how far computers should encroach on doctors’ turf. As artificial intelligence systems get smarter, experts say, the line between making recommendations and making decisions could become more murky. That could cause regulators to view the systems as a medical devices, subject to the review of the U.S. Food and Drug Administration.

Wary of the time and expense required for FDA approval,  companies engineering the systems – at least for now– are careful not to describe them as diagnostic tools but rather as information banks.

“The FDA would be down on them like a ton of bricks because then they would be claiming to practice medicine,” says MIT’s Szolovits.

At the moment, he said, the technology isn’t good enough to tell doctors with 100 percent certainty what the best course of treatment for a patient may be. Others agree.

“It’s going to be a long road,”  said Michael Matheny, a biostatistician at the Vanderbilt School of Medicine.

Back at her clinic in Long Island, Dr. Mariwalla is thankful for the information that the artificial intelligence system can provide.

For the patient with that blistering skin condition, she took the machine’s suggestion for an alternative medication. The patient has recovered, Mariwalla said.

But she’s careful to add that she made the call herself—based in part on her conversation with her patient.

“That’s where medical judgment comes in,” she said. “You can’t [just] rely on a system to tell you what to do.”

When Doctors Need Advice, It Might Not Come From A Fellow Human