With no insurance through his job, Jose Nuñez relied on Medicaid, the nation’s public insurance program that assists 75 million low-income Americans.

Like most people on Medicaid, the Los Angeles trucker was assigned to a private insurance company that coordinated his medical visits and treatment in exchange for receiving a set fee per month — an arrangement known as managed care.

But in 2016, when Nuñez’s retina became damaged from diabetes, the country’s largest Medicaid insurer, Centene, let him down, he said. After months of denials, delays and erroneous referrals, he claimed in a lawsuit, the 62-year-old was left nearly blind in one eye. As a result, he lost his driver’s license and his livelihood.

“They betrayed my trust,” Nuñez said, sitting at his kitchen table with his thick forearms folded across his chest.

The current political debate over Medicaid centers on putting patients to work so they can earn their government benefits. Yet some experts say the country would be better served by asking this question instead: Are insurance companies — now receiving hundreds of billions in public money — earning their Medicaid checks?

More than two-thirds of Medicaid recipients are enrolled in such programs, a type of public-private arrangement that has grown rapidly since 2014, boosted by the influx of new beneficiaries under the Affordable Care Act.

States have eagerly tapped into the services of insurers as one way to cope with the expansion of Medicaid under the ACA, which has added 12 million people to the rolls. This fall, voters in three more states may pass ballot measures backing expansion. Outsourcing this public program to insurers has become the preferred method for running Medicaid in 38 states.

Yet the evidence is thin that these contractors improve patient care or save government money. When auditors, lawmakers and regulators bother to look, many conclude that Medicaid insurers fail to account for the dollars spent, deliver necessary care or provide access to a sufficient number of doctors. Oversight is sorely lacking and lawmakers in a number of states have raised alarms even as they continue to shell out money.

“We haven’t been holding plans to the level of scrutiny they need,” said Dr. Andrew Bindman, former director of the federal Agency for Healthcare Research and Quality and now a professor at the University of California-San Francisco. “This system is ripe for profit taking, and there is virtually no penalty for performing badly.”

In return for their fixed fees, the private insurers dole out treatment within a limited network, in theory allowing for more judicious, cheaper care. States contract with health plans as a way to lock in some predictability in their annual budgets.

More than 54 million Medicaid recipients are now covered by managed-care plans, up from fewer than 20 million people in 2000. (In traditional Medicaid, states pay doctors and hospitals directly for each visit or procedure — an approach that can encourage unnecessary or excessive treatment.)

Already, states funnel nearly $300 billion annually to Medicaid insurers. That’s up from $60 billion a decade ago. Today’s spending is approaching what Pentagon awards annually to contractors. 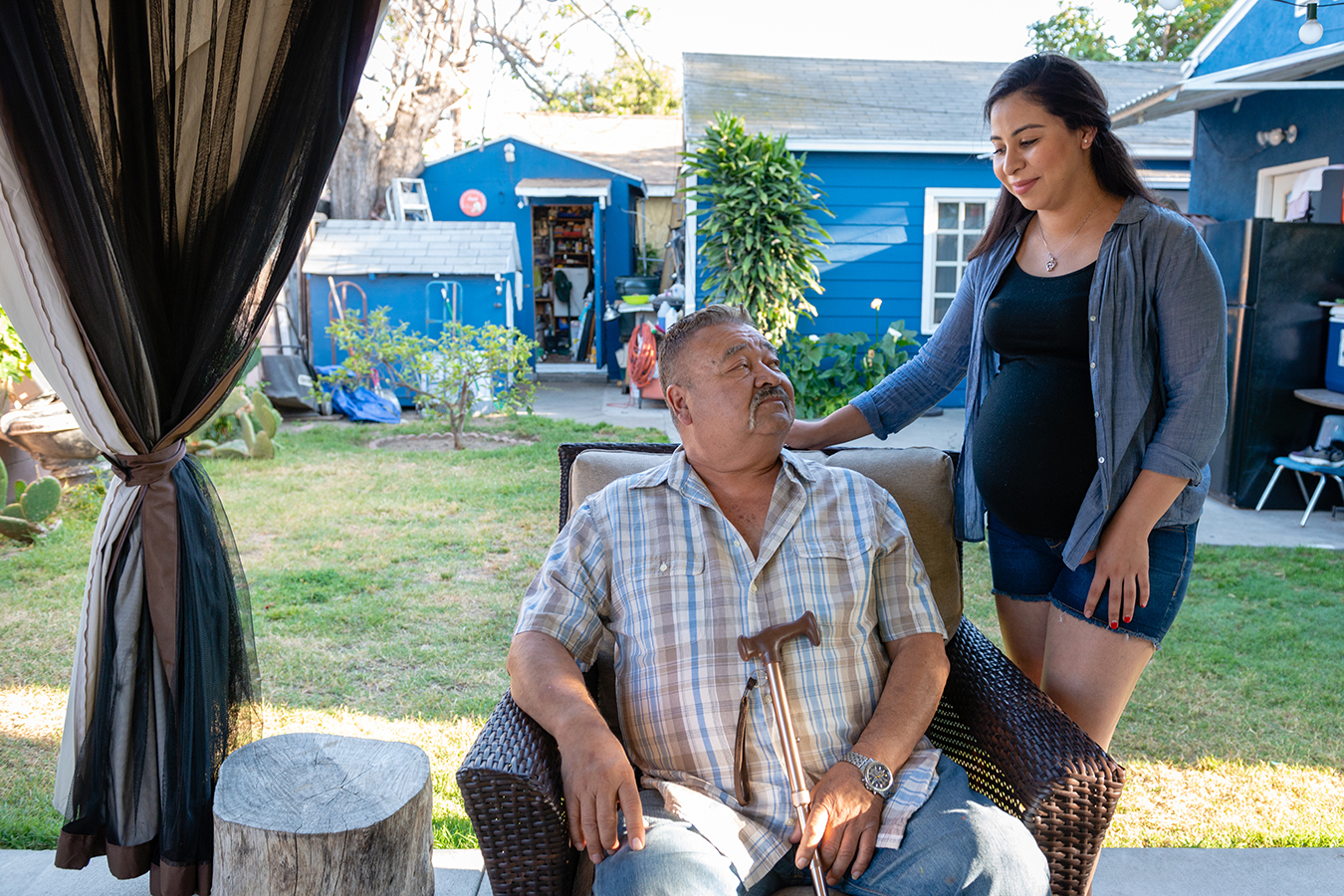 Jose Nuñez says he and daughter Diana Nuñez took turns calling his Medicaid plan and waiting on hold for answers after his eye surgery was canceled twice. He waited three months for his insurer to approve the operation, he says. By that time, his retina had deteriorated and Nuñez was nearly blind in one eye.(Heidi de Marco/KHN)

Medicaid is good for business: The stock price of Nuñez’s insurer, Centene, has soared 400 percent since the ACA expanded Medicaid eligibility. The company’s chief executive took in $25 million last year, the highest pay for any CEO in the health insurance industry. In California, the largest Medicaid managed-care market with nearly 11 million enrollees, Centene and other insurers made $5.4 billion in profits from 2014 to 2016, according to a Kaiser Health News analysis.

Plans get to keep what they don’t spend. That means profits can flow from greater efficiency — or from skimping on care and taking in excess government payments.

“States are just giving insurers the keys to the car and a gas card,” said Dave Mosley, a managing director at Navigant Consulting and former finance director at the North Carolina Medicaid program. “Most states haven’t pressed insurers for the information needed to determine if there’s any return on their investment.”

Two of California’s most profitable insurers, Centene and Anthem, ran some of California’s worst-performing Medicaid plans, state quality scores and complaints in government records show. California officials have been clawing back billions of dollars from health plans after the fact.

For nearly two decades, federal officials have tried building a national Medicaid database that would track medical care and spending across states and insurers. It’s still unfinished, hampered by differing state reporting methods and refusals by some health plans to turn over data they deem trade secrets.

In July, a federal inspector general’s report accused Medicaid insurers of purposefully ignoring fraud and overpayments to doctors because inflated costs can lead to higher rates in the future.

In a report last month, the U.S. Government Accountability Office disclosed that California’s Medicaid program is unable to electronically send records justifying billions of dollars in spending, forcing federal officials to sift through thousands of documents by hand. California said it can’t share key files electronically because it uses 92 separate computer systems to run the program.

“You simply cannot run a program this large when you can’t tell where the money is going and where it has been,” said Carolyn Yocom, a health care director at the GAO.

Today, Medicaid consumes the single-largest share of state budgets nationwide at nearly 30 percent — up from less than 21 percent a decade ago — crowding out funding for education, roads and other key priorities.

“If anything, our results suggest that the shift to Medicaid managed care increased Medicaid spending,” researchers at the Congressional Budget Office and the University of Pennsylvania concluded in 2013, based on a nationwide analysis.

Health plans also say they can help modernize the program, created more than a half century ago, by upgrading technology and adopting fresh approaches to managing complex patients.

Getting it right has big implications for patients and taxpayers alike, but the results in many states aren’t reassuring.

State lawmakers in Mississippi, both Republicans and Democrats, criticized their Medicaid program last year for ignoring the poor performance of two insurers, UnitedHealthcare and Centene, even as the state awarded the companies new billion-dollar contracts.

In Illinois, auditors said the state didn’t properly monitor $7 billion paid to Medicaid plans in 2016, leaving the program unable to determine what percentage of money went to medical care as opposed to administrative costs or profit.

In April, Iowa’s state ombudsman said Medicaid insurers there had denied or reduced services to disabled patients in a “stubborn and absurd” way. In one case, an insurer had cut a quadriplegic’s in-home care by 71 percent. Without the help of an aide to assist him with bathing, dressing and changing out his catheter he had to move to a nursing home, according to the ombudsman, Kristie Hirschman.

Meanwhile, the Trump administration has sent mixed signals on Medicaid oversight. Seema Verma, administrator for the Centers for Medicare & Medicaid Services, has promoted a new, nationwide scorecard and vowed to ramp up audits targeting states and health plans.

“We need to do better,” Verma said in a Sept. 27 speech to the Medicaid managed-care industry. “Medicaid has never developed a cohesive system of accountability that allows the public to easily measure and check our results.”

But consumer advocates also are concerned that Verma’s efforts to roll back “burdensome regulations” will weaken accountability overall. Many also disagree with her support of Medicaid work requirements.

Nuñez, the truck driver who lost much of his sight, is suing a unit of Centene for negligence and breach of contract. The company has denied the allegations in court filings and declined to comment further, citing the pending litigation.

Talk of requiring Medicaid recipients to work is hard for him to take. “I need my health to work,” he said. “They took that away from me.”