When it comes to expanding health coverage to its poorest residents, California could be taking two steps forward and one step back.

Even as the state celebrates its enrollment of more than 2.7 million low-income Californians in Medi-Cal in 2014, it may drop an unusually high number of beneficiaries from its rolls by year’s end. 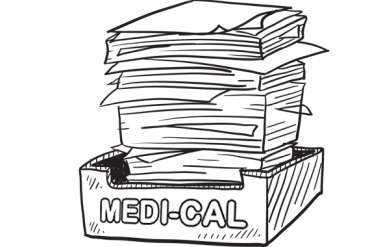 That is because Medicaid eligibility standards relating to income and household size changed under the Affordable Care Act, forcing the 8.6 million people who had been on the program before Jan. 1 to apply under the new rules. (Medi-Cal is California’s version of the federal Medicaid program.)

Beneficiaries always have to renew their coverage annually, and there is always some churn in enrollment as people’s circumstances change. But this year, the forms asked for a host of new information, and many more people than usual haven’t responded, according to state officials, county welfare directors and advocates.

In past years, depending on the county, about 20 to 40 percent of Medi-Cal beneficiaries do not renew their coverage. But this year, the numbers are running as high as 50 percent in some counties, according to state Health Care Services Director Toby Douglas. Los Angeles County reported 38 percent hadn’t returned applications sent in August, compared to 15 to 20 percent in previous years.

Although the state isn’t yet giving out estimates, advocates say this reduced response rate could translate into as many as a million or more additional people cut from the Medi-Cal rolls this year.

On Monday, the Western Center on Law & Poverty, along with several other advocacy groups, sued the California Department of Health Care Services in Alameda Superior Court, charging that Medi-Cal beneficiaries are being unfairly dropped from coverage. The groups are also applying for a temporary restraining order to stop the state from canceling coverage for Medi-Cal recipients who haven’t been properly notified.

The problem is coming to a head now in part because the state granted people a six-month grace period past their usual renewal dates to re-enroll. In November and December, many of the renewals are coming due – and those who don’t respond are being told they will be cut off.

“A lot of people will be getting a notice right before Thanksgiving telling them that they’re losing their Medi-Cal,” says Jen Flory, a senior attorney at the Western Center on Law & Poverty. “Our concern is that a lot of them don’t really understand what’s going on and haven’t had an opportunity to provide the adequate information.”

Recipients who do not return their packets and receive a termination can be reinstated if they send in their information within 90 days.

The California Department of Health Care Services declined to comment on the lawsuit. Before the suit was filed, Rene Mollow, deputy director of healthcare benefits and eligibility at the health services department, said that renewing Medi-Cal benefits “was always a very involved process.” This year, the department was under a compressed timeline to develop the new forms but worked to make the forms as simple as possible, she said. Next year’s form should be easier to use, she added.

“We do have remedies in place where people can come back into coverage,” said Morrow. “2014 was a year of change. Our goal here is to continue working with our counties and beneficiaries to make sure the people who are eligible retain coverage.”

Consumers can seek help by phone or at their local social or human services department office, and the forms provide a number to call if the recipient speaks another language, Morrow said.

The California Department of Health Care Services sent everyone who needed to renew the necessary application in the mail, but advocates like Flory say people have struggled to complete it. The form is complicated, asks for information the recipients hadn’t provided in the past and is available only in English and Spanish.

“There’s a lot of confusion, and it’s a language access issue,” said Connie Lo, health programs coordinator at Asian Americans Advancing Justice Los Angeles. “Most of our clients are limited English proficiency. They don’t even know what these packets are for and why they’re receiving so many documents together that they can’t even read.”

“There’s going to be a lot of people who lose coverage. That’s bad for them, but it’s also bad for the medical program and trust in DHCS,” Lo said. “We had this big push to get people enrolled in health insurance this year, and now we’re just terminating people.”

“It’s a very confusing form even in English, and it looks very different from what it looks in past years,” said Cori Racela, a staff attorney at Neighborhood Legal Services of Los Angeles County, which runs a consumer helpline. “We believe it’s very burdensome to consumers.”

Flory said she doesn’t think the terminations are an accident. “When people fail to jump through these hoops to stay on the program, the state saves money,” she said.

The population who were already on Medi-Cal before Jan. 1 is a lot more expensive for the state to cover, she said. The federal government pays only half of their health care costs, compared to 100 percent of the costs for those who qualify under the ACA’s broader eligibility guidelines.

Some counties have been doing additional outreach this year to help people with previous Medi-Cal coverage renew in time. San Mateo Human Services Agency director Iliana Rodriguez says the county has been working with health plans to call recipients, make robo calls in their primary languages and send out additional reminders.

“We’re leaving no stone unturned in terms of getting them in the door,” says Rodriguez, who adds that San Mateo is on track to hit about a 76 percent rate for Medi-Cal renewals this year.

As California Expands Medicaid To New Beneficiaries, Many Others Are Dropped