As health care consolidation accelerates nationwide, a new study shows that hospital prices in two of California’s largest health systems were 25 percent higher than at other hospitals around the state.

Researchers said this gap of nearly $4,000 per patient admission was not due to regional wage differences or hospitals treating sicker patients. Rather, they said California’s two biggest hospital chains, Dignity Health and Sutter Health, had used their market power to win higher rates.

“California experienced its wave of consolidation much earlier than the rest of the country and our findings may provide some insight into what may happen across the U.S. from hospital consolidation,” said the study’s lead author, Glenn Melnick, a health care economist at the University of Southern California.

Dignity and Sutter disputed the idea that they can dictate rates, saying they face ample competition.

Hospital chains that buy up other facilities, clinics and physician offices often tout savings and improved services from coordinating patient care and eliminating inefficiencies. The researchers found no evidence that any potential savings were being passed along to the employers, insurers and patients who pay for the care.

The study, published in the Journal of Health Care Organization, Provision and Financing, comes as Sutter faces a lawsuit and an investigation by state Attorney General Kamala Harris for potential harm to consumers. Dignity and other big medical groups are also subjects of the attorney general’s inquiry.

One limitation of the study is that it draws only on claims data from Blue Shield of California, the state’s third-largest health insurer. However, experts say that what Blue Shields pays is a good proxy for the industry as a whole.

The prices in the study reflect the actual amounts paid by Blue Shield, not billed charges or list prices.

The research showed that from 2004 to 2013, the amount paid by Blue Shield to nearly 60 hospitals owned by Dignity and Sutter jumped 113 percent compared to a 70 percent increase at about 175 other California hospitals.

At the beginning of that ten-year period, prices were similar at all the hospitals studied. However, by 2013, the average payment per patient admission was $19,606 at Dignity and Sutter hospitals and $15,642 at the other hospitals.

James Robinson, a University of California, Berkeley professor of health economics, said the study’s findings show how dominant health systems use revenue from higher prices to get even bigger.

“It allows them to further expand by acquiring medical groups which gives them even more bargaining power,” Robinson said.

Sutter spokesman Bill Gleeson said the health system’s recent price increases to insurers have been extremely low and its charges are in line with competitors. He also cast doubt on the study’s validity because of its reliance on data from Blue Shield, which has clashed publicly with Sutter over prices and contracts.

“This a self-serving play by Blue Shield to use stale and potentially misleading data to further its contract negotiations with Sutter Health and an attempt to advance its position in pending litigation,” Gleeson said.

Melnick said Blue Shield shared its claims data but wasn’t involved in the analysis or the conclusions of the study. The San Francisco-based insurer declined to comment on the study until it could review the findings.

Dignity said a number of factors affect its prices for commercially insured patients. It cited high labor costs, the need to pay for state-mandated seismic upgrades and the expense of treating a rapidly growing Medicaid population in California.

Dignity, a nonprofit based in San Francisco, is California’s largest hospital chain, with 32 facilities in the state and seven more in Arizona and Nevada. It posted an operating profit of $423 million on annual revenue of $12.4 billion in the year ending June 30, 2015. 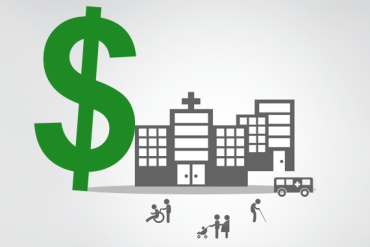 Sutter’s nonprofit system, based in Sacramento, includes 24 hospitals and 34 surgery centers. It reported $11 billion in revenue last year and an operating profit of $287 million.

Hospitals run by Kaiser Permanente, both an insurer and health system, weren’t in the claims data analyzed.

The study’s authors said lawmakers should consider limiting the use of “all-or-none” negotiating tactics that force health plans and employers to accept all of a health system’s hospitals, clinics and physician groups or risk losing access to them all.

Gleeson, the Sutter spokesman, said his health system does not use all-or-none contract provisions.

“There are many health plan products that include pieces and parts of Sutter Health,” he said.

UC Berkeley’s Robinson said he was “dubious about the state getting in there and regulating different forms of private contracting.”

The increase occurred at a time when other economic indicators rose more modestly. California household income, for example, increased 23 percent during that period.

Sutter faces a class-action lawsuit, filed by a Blue Shield-run grocery workers’ health plan and supported by other employer and business groups, that accuses the health system of imposing anticompetitive terms and illegally inflated prices. Sutter disputes the allegations.

As Hospital Chains Grow, So Do Their Prices For Care