Medical students cram a lot of basic science and medicine into their first two years of training. But most learn next to nothing about the intricacies of the health care system they are soon to enter.

That’s something the medical school at George Washington University in Washington, D.C., is trying to remedy.

“Clinicians today have to graduate being great providers of individual care,” said Dr. Lawrence Deyton, the senior associate dean who’s spearheading this effort. “But they also have to recognize and be able to act on the fact that their patients, when they leave the clinic or leave the hospital, are going home [and] living in situations where there are all kinds of factors that promote and perpetuate chronic disease.”

The idea behind the new curriculum is to link more closely medicine with the policy issues it directly affects. So after learning about the lungs and pulmonary system, for example, the students do a project on controlling childhood asthma.

That’s what brought the entire first-year class to an auditorium on a rainy Wednesday in May. One by one, small groups of students presented their proposals for how to help control childhood asthma in Washington, D.C., especially in some of the city’s lower-income areas.

In one such approach, a child with asthma would wear a bracelet that transmits information to an app — called AsthMama — on a parent’s smartphone. “The app gives the mother [or father] the chance to be able to really manage the disease,” says first-year student Erin Good, describing the concept her group came up with. How exactly would it work? “Either the child or the bracelet itself can detect problems,” Good explained. “Maybe the child pushes it because they feel like they’re having an asthma attack.” The bracelet would automatically notify a parent, or the school nurse, or both, before the problem escalates any further.

Good’s group suggested to the panel of experts, including local doctors, parents and city health officials, that the project could be initially paid for by grants. If it works, it could eventually be covered by the Medicaid program. 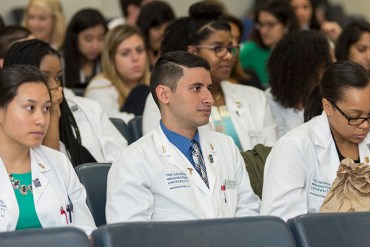 “So as they’re learning about diseases and conditions, they’re [also] recognizing those public health, population health and social determinants of health factors,” he said.

That emphasis on the not-strictly medical part of medical schools appeals to students like Jeffrey Roberson, who was a social worker before coming to George Washington.

When he talks to friends at other medical schools, Roberson said, “they think it’s fascinating … that we sit and we learn about how our health care system is paid. Other schools don’t do that. So you’ll have physicians that have no idea how insurance works.”

GW has some built-in advantages when it comes to teaching policy, among them its location in the heart of the nation’s capital. At the end of their first semester, after learning about infectious diseases, the students did a three-day “deep dive” into AIDS and HIV policy. And they presented their proposals directly to the national AIDS czar — at the White House.

“It was really just a powerful day to see all of our colleagues, just one semester into medical school, with really innovative ideas, at the White House, and getting feedback from the AIDS czar, from all these major directors of health policy for individual states,” Roberson said.

Deyton says one of the ideas presented that day — a reminder system to help HIV patients in Tennessee take their medication — might become actual policy.

As the students were presenting their proposal, he said, “the director of AIDS for Tennessee was writing all this down.” And it turns out she was sitting next to the federal official who would be in charge of getting it covered by Medicaid.

“And that person leaned over to her and said, ‘You know if you propose that I’ll probably approve it,’” Deyton said.

Teaching health policy in medical school isn’t actually new. Many schools have been doing it for years. But Neel Shah, a physician and policy researcher at Harvard, says what is new is integrating policy and practice.

“For example, I remember when I was learning about health care costs for the first time, the whole conversation was about the GDP,” he said, referring to how much of the nation’s gross domestic product goes towards health care.

But, said Shah, “nobody goes to medical school to treat the GDP. There’s like a huge gap between the macro-level understanding of health care economics and what matters to patients and clinicians at the bedside.”

It’s that gap that today’s medical educators are trying to fill. One class at a time.

At This Medical School, Students Mix Science And Health Policy