It wasn’t so long ago that health insurance horror stories fueled discussions around the family dinner table and the national debate over health care reform.

“One company said I was too heavy,” said Scott Svonkin, of Los Angeles, of the time he was denied an individual health policy in 2005. Svonkin, 50, said two other insurers seemed OK with his weight but also turned him down, citing his asthma and his wife’s pregnancy, which could put the insurers on the hook for a dependent whose health was uncertain.

“I was horrified that insurance companies would turn me down,” said Svonkin, who now works for the L.A. county assessor and is chairman of the County Commission on Insurance. 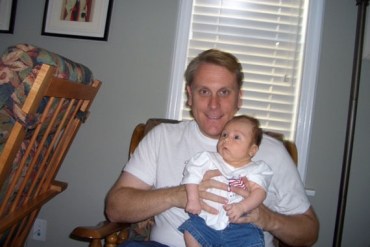 Scott Svonkin, pictured here with his newborn son, Sam, in 2006. Svonkin says he was denied health insurance three times before changes under the Affordable Care Act. He found health coverage in a high-risk pool. (Courtesy of Scott Svonkin)

Svonkin did get coverage, however, thanks to a state-run “high risk” health insurance program, created for people who couldn’t get insurance because of preexisting conditions such as a past illness or a chronic disease. Thirty-four other states created similar programs, which have since dwindled or dissolved because the Affordable Care Act required health insurers not to exclude people based on their health status. The pools used state money, such as tax revenue or private insurer fees, to pay for their care.

But some California health officials and policy experts say that would be a big step backward — to a state program that offered long waits for coverage, high prices, limited benefits and few health plan choices.

“People would literally pass away while they were on the waiting list,” said Richard Figueroa, who was one of the original staff members of California’s program, the Major Risk Medical Insurance Program (MRMIP), when it started in the early 1990s. Later, he served on the governing agency’s board before it was dissolved under the Affordable Care Act.

The program never had enough money to cover the need among the uninsured, Figueroa said. It had a $30 to $40 million budget in a given year, mostly from tobacco tax revenue. Figueroa said the limit on how many people could enroll declined over the years in part because costs kept rising. In 2011, fewer than 7,000 people were enrolled.

In the 1990s, thousands of people languished on waiting lists, Figueroa said. When their turn came for coverage, some people found they couldn’t afford the monthly premium.

“We never advertised. Because why would you advertise something that wasn’t available?” said Figueroa, now the director of health and human services for the California Endowment. (The endowment provides funding to Kaiser Health News, which produces California Healthline.)

“We were a stopgap, we were a holding place, a waiting area,” said Figueroa. “We were always hoping [the program] would go away with the advent of national insurance reform,” he said.

More than half of state high-risk insurance pools have closed in the past few years, according to data from the National Association of State Comprehensive Health Insurance Plans (NASCHIP). In other state-run high-risk pools, new enrollment has stopped and overall participation has dropped, the data showed. Premiums ranged from 125 to 200 percent of the average individual market rate in a given state, according to NASCHIP.

California’s program is still puttering along, with fewer than 1,600 enrollees and an $11 million-plus budget last fiscal year. Some remaining enrollees have end-stage kidney disease, a condition commercial insurers are not required to cover, according to California’s Department of Health Care Services. Members must choose between two different health insurance carriers, in contrast to Covered California enrollees, who have as many as five choices in some areas.

“High-risk pools segregate sick people into plans that are more expensive to both the government and the individual,” said Anthony Wright of Health Access, a coalition of consumer advocates.

Wright said the high-risk pools were among the “failures” in the health care system that led to Obamacare.

A 2011 study of Minnesota’s high-risk pool, one of the oldest and largest in the country, suggested that spending on enrollees increased over time. Keeping program costs down was also a challenge, it noted, as was securing ongoing public funding.

California’s program had strict limitations — a $75,000 annual maximum on health claim payouts, with a $750,000 lifetime maximum.

People with hemophilia would often exceed the lifetime maximum and not be able to get further coverage, said Cheryl Fish-Parcham, private insurance program director for the advocacy group Families USA.

Around the country, rules about benefits and who could qualify for the high-risk pools varied, Fish-Parcham said. In some states, enrollees couldn’t obtain coverage for a certain amount of time for some health conditions if they had been previously uninsured. Not all states had waiting lists.

“Why would you go back to a system that discriminates against patients?” he said.

Any bill to expand California’s high-risk pool would have to go through his committee and he wouldn’t support it, Hernandez said.

President-elect Donald Trump’s transition website said his administration “will work with both Congress and the States to re-establish high-risk pools.” It’s not clear how much authority states would have in implementing — or rejecting — such a change.

Congressional Republicans hope to pump life back into state high-risk pools with $25 billion in federal money. U.S. House Speaker Paul Ryan proposes that premiums in state programs be capped and wait-lists be “prohibited.”

Dean Clancy, a former Republican health policy analyst for President George W. Bush, acknowledges the programs have struggled in the past but says if revived with the funding proposed by Speaker Ryan, they would be more viable.

“The ideal health insurance market would be based on medical risk,” Clancy said.

He explained that in an ideal system, people would pay according to the likelihood their health status would create costs for the insurers. Using government funds to help cover a small proportion of uninsurable people, Clancy said, “leaves the rest of the market free to operate according to normal insurance principles.”

High-risk pools are a form of charity, said Clancy, and he doesn’t see them as discriminatory.

“Is welfare discriminating against people with low incomes? High-risk pools are trying to help people, not hurt them,” said Clancy.

“It was very limited,” said Svonkin about the number of health plans he could choose from. “But I felt lucky to have insurance.”

Linda Carmi of Palm Desert, who was unemployed after recovering from breast cancer in the early 1990s, also said she felt lucky to get any coverage at all.

“I thought it was really a great find,” said Carmi, 65, a now-retired ultrasound technician who is covered by Medicare. She noted that coverage in the high-risk pool was “decent” but expensive. Her husband’s income helped pay for it.

“It worked well at the time, because I made it work,” she said. But Carmi added that she was always “very, very careful” not to exceed the lifetime limit on benefits.

But until all politicians are subject to the health care system people like her have experienced for the past 25 years, Carmi said, “I don’t see a solution coming from Washington.”

Back To The Future: Insurance Pools For High-Risk Patients Could Be Revived