Laura Cameron, then three months pregnant, tripped and fell in a parking lot and landed in the emergency room last May — her blood pressure was low and she was scared and in pain. She was flat on her back and plugged into a saline drip when a hospital employee approached her gurney to discuss how she would pay her hospital bill.

Though both Cameron, 28, and her husband, Keith, have insurance, the bill would likely come to about $830, the representative said. If that sounded unmanageable, she offered, they could take out a loan through a bank that had a partnership with the hospital.

The hospital employee was “fairly forceful,” said Cameron, who lives in Fayetteville, Ark. “She certainly made it clear she preferred we pay then, or we take this deal with the bank.”

Private doctors’ offices and surgery centers have long offered such no- or low-interest financing for procedures not covered by insurance, like plastic surgery, or to patients paying themselves for an expensive test or procedure with a fixed price.

But promoting bank loans at hospitals and, particularly, emergency rooms raises concerns, experts say. For one thing, the cost estimates provided — likely based on a hospital’s list price — may be far higher than the negotiated rate ultimately paid by most insurers. Sick patients, like Cameron, may feel they have no choice but to sign up for a loan since they need treatment. And the quick loan process, usually with no credit check, means they may well be signing on for expenses they can ill afford to pay.

The offers may sound like a tempting solution for scared, vulnerable patients, but they may not be such a great bargain, suggests Mark Rukavina, an expert in medical debt and billing at Community Catalyst, a Boston-based advocacy group.

His point: “If you pay zero percent interest on a seriously inflated charge, it’s not a good deal.”

How The Loans Work

But many patients have trouble coming up with cash to pay bills of hundreds or even thousands of dollars, meaning hospitals are having a harder time collecting what they believe they are owed.

To solve their problem, about 15 to 20 percent of hospitals are teaming up with lenders to offer loans, said Bruce Haupt, CEO of ClearBalance, a loan servicing company. He, along with many other analysts, expects that percentage to grow.

The process begins with a hospital estimate of a patient’s bill, which takes insurance coverage into account. A billing representative then lays out payment plans for the patient, often while he or she is still being treated.

A patient can then sign up for a loan, often without a credit check. Patients write smaller monthly checks to the lender, who has paid the hospital, while keeping a designated percentage of the bill as a fee.

Proponents view financing as a useful alternative to medical credit cards, which can surprise users with high interest rates. The partnerships are tempting for hospitals since they offload the need to administer monthly payment plans and collection efforts.

Federal law requires lenders be transparent about the loan terms, a protection that extends to consumers entering these health care arrangements. That means disclosure of interest rates, other fees and the payment schedule.

Even so, said Gerard Anderson, a Johns Hopkins health policy professor and an expert on health care pricing, “it’s an often gentler version of asking you to pay up.”

But an on-the-stretcher sell leaves patients little opportunity for due diligence.

Cameron was suspicious of the $830 estimate of her bill, since she had good coverage from her job at the University of Arkansas. She and her husband had extensive experience with the health care system and its costs. No one had ever asked her to pay upfront, even when her husband owed tens of thousands for cancer treatment.

“It just felt so uncomfortable to us that they would try to push us through a bank, which is designed to make a profit,” Cameron said.

A Growth Business With Risk Of Default

At Florida-based Orlando Health, which works with ClearBalance, loans typically range from $3,000 to $7,000, said Michele Napier, the health system’s chief revenue officer. The highest debt a patient has taken on — about $13,000 — was because of a high-deductible plan, she said.

“All of a sudden a catastrophic event occurs, and to have $13,000 in the bank account is a lot to ask,” she said. “They’re able to spread those payments.” 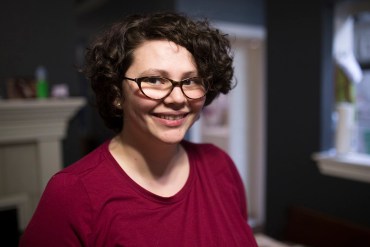 Though Laura Cameron and her husband have insurance, a hospital employee told them that an emergency room bill after a then-pregnant Laura was treated for a fall would likely total about $830. The employee said that if they couldn’t afford that, they could take out a loan through a bank that had a partnership with the hospital. The Camerons declined the offer. (Charlie Kaijo for Kaiser Health News)

Low-income patients without insurance likely will not need loans to finance large bills,because they should quality for aid from the hospital, or be treated as charity care, Napier said.

It’s a conversation that starts at registration, she added. “If a patient shares with us that they have no resources or limited resources to pay, we will provide information on our financial assistance and other programs including screening them for Medicaid.”

The idea is to foster open conversations about cost and help patients and doctors weigh their options, both financial and medical, said Rick Gundling, a senior vice president at the Healthcare Financial Management Association, a trade group.

“The patient may say, ‘Hey, do I need to do this knee surgery now? Can we wait until I save up, or do I have other options, like physical therapy?’” he said. “The doctor may say … let’s look at other options.”

But the loans can be a band-aid solution, leading vulnerable patients to sign up to pay far more than they should, said Kathleen Engel, a research professor of law at Boston-based Suffolk University and an expert in consumer credit and mortgage finance.

“The hospital potentially is charging the patient the full, what I would call ‘whack rate’ for their care,” she said. “They try to collect the debt.”

Since many of these loans come without credit checks or affordability tests, the odds are higher that a loan could be financially unwise, experts warn.

At ClearBalance, loans average about $1,700, Haupt said. In practice, that means some patients are financing $150 bills, while others have them for as large $50,000.

Default rates vary across the country, with the highest default rates — up to 1 in 5 patients — in places such as Texas and Louisiana. In other areas, closer to 6 or 7 percent of patients ultimately cannot pay off their loans.

“Some of these people are destined to default,” Engel said. “If you have to get a loan for $500 for medical care, that means you are really living at the margins.”

Cameron declined the loan — and chose not to hand over any other form of payment. She wanted to wait until she received her insurance statement.

In the end, the couple owed only $150, the copayment for an ER visit. “It felt to us like it could screw someone over who wasn’t aware about how to work that system,” she said, though she admitted to feeling intimidated as she lay on the stretcher.

She added: “It can be scary feeling like you owe someone money.”