Ahead of the unveiling Tuesday of the latest United Health Foundation’s America’s Health Rankings, Reed Tuckson, a foundation board member, had a scary message for the nation: We’re facing “a tsunami of preventable illness,” Tuckson said. “We aren’t prepared for the consequences of that.” 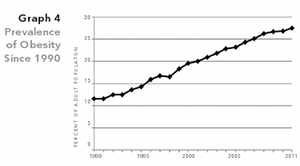 In an interview with KHN in advance of the release of the rankings, Tuckson characterized the state-by-state report card of health stats as a grim call to arms. After improving an average of 1.6 percent a year since the 1990s, the annual index remained flat this year for the first time in its 22 years of existence. And, as Tuckson bluntly asserts, a sicker nation means a more expensive nation at a time when health costs are already stretching consumers and employers beyond their limits. He warned: “You’re going broke!”

Tuckson, a physician and executive vice-president of UnitedHealth Group, a leading insurance company, says a rise in obesity rates from 26.9 percent in 2010 to 27.5 percent this year is the leading reason the index has plateaued. The related disease, diabetes, also appears on the rise since last year’s results, and child poverty rates are increasing, too.

Obesity in the nation has ballooned from 11.6 percent of the adult population in 1990 to 27.5 percent in 2011. A 2009 report commissioned by Tuckson’s foundation projected that the obesity rates could reach 43 percent by 2018 if trends continued. “And, they have continued,” he said.

Many of the factors contributing to obesity and diabetes are beyond the medical industry’s reach. “I hate it, as a doc, being left holding the bag for stuff I can’t control,” he said. The foundation is working to change that, by initiating talks with leaders from other sectors to try to figure out how to tackle the obesity problem.

Tuckson recounted one food-retailing executive’s lament expressed at a recent meeting. The exec said it’s not hard to get asparagus onto grocery shelves, “but nobody is buying it,” Tuckson said. “People don’t know how to cook it.” A remedy being considered is to find a way to incorporate recipes into the packaging and marketing of fresh vegetables.

That meeting brought together mid-level executives at companies ranging from agribusiness conglomerates to fast food chains. The food industry representatives complained to Tuckson and others present, “We can’t change demand.”

On the bright side, the rankings show that slightly fewer people smoke this year than last year and violent crime is down significantly since 1990.

It's Not Just Insulin: Lawmakers Focus on Price of One Drug, While Others Rise Too