The National Football League backed away from promoting Obamacare insurance marketplaces this summer after a sharp warning from Republicans. But the Baltimore Ravens seem to have stepped — or at least edged — into the gap. By including health insurance ads on their Gameday TV show and other content, the Super Bowl champs will work with Maryland officials “to connect with Maryland residents about the importance of developing a health coverage game plan,” according to a Tuesday promotion blitz. 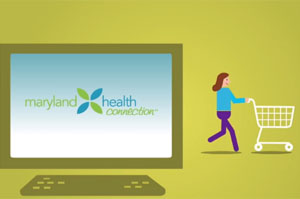 A screengrab of one of Maryland's exchange ads.

The Ravens join Giant Food and CVS Pharmacy in the effort to get as many uninsured people as possible enrolled in the state’s online marketplace, dubbed the Maryland Health Connection. With an ad budget of $2.5 million, the predominantly Democratic state hopes to enroll 180,000 in private coverage sold through the marketplace and another 110,000 in an expanded Medicaid program.

“Research shows that 71 percent of the uninsured population in Maryland have watched, attended or listened to a Ravens game in the past 12 months,” said the news release. “The partnership will provide Maryland Health Connection with the opportunity to reach and engage fans while making them aware of the new opportunity they have for health coverage beginning this fall through the health insurance marketplace.”

But the Ravens partnership will stop short of players urging Marylanders to get insured or announcements during games at M&T Bank Stadium. Rather, the Maryland Health Connection will place ads on Gameday and on the Ravens Web site and Facebook page, said connection spokeswoman Danielle Davis.

“It’s a media partnership,” she said. “It doesn’t include the players. It’s really with the Ravens organization.”

The Ravens downplayed the relationship.

“This is an advertising package purchased by a state agency, much like we have business associations with the Maryland Lottery and the Maryland National Guard, as well as other groups like Giant Food and Verizon,” said Ravens spokesman Kevin Byrne.

Exchange officials showed off the TV ads, which avoid the the cuteness of Oregon’s and Minnesota’s health exchange promotions and instead deliver a simple message: Heath insurance gives you peace of mind, so, “Gotta have it, gonna get it.” The spots show ordinary Marylanders on a fishing dock, in a hair salon, at a clothing store, on a farm and sitting on a stoop in front of what appears to be one of Baltimore’s trademark row houses.

“Marylanders actually want insurance,” said Rebecca Pearce, executive director of the Maryland Health Benefit Exchange. “They fully appreciate the value of health coverage. They know they need it to protect them in emergencies, protect them from the financial burden of health costs, provide them the preventive care they need and to offer peace of mind for themselves and their families.”

The Obama administration’s efforts to team with the NFL flopped this summer after Senate Minority Leader Mitch McConnell and Minority Whip John Cornyn warned the league that promoting Obamacare would damage its reputation.

“Given the divisiveness and persistent unpopularity of this bill, it is difficult to understand why an organization like yours would risk damaging its inclusive and apolitical brand by lending its name to its promotion,” they wrote NFL commissioner Roger Goodell.

Ravens owner Steve Bisciotti, who made his money with staffing firm Allegis Group, keeps a low political profile. He and wife Renee have donated mainly to Republicans in recent years, according to the Center for Responsive Politics, which tracks political spending. But Bisciotti has also given to Democratic Sen. Tom Carper of Delaware. Ravens President Richard Cass and wife Heather, on the other hand, give mainly to Democrats, according to the center.