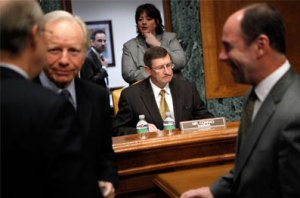 Budget Committee Chairman Sen. Kent Conrad, D – N.D., is one of the authors of the plan to create a commission to help “bend the curve” of health care costs. Sen. Joseph Lieberman, I-Conn., supports such an idea. (Chip Somodevilla/Getty Images)

The drive on Capitol Hill to create a bipartisan entitlement and tax reform commission to help “bend the cost curve” of health spending and address mounting deficits picked up momentum Tuesday, as Senate Minority Leader Mitch McConnell and a handful of moderate Democrats and Republicans voiced support for the effort.

The commission would draft proposals to control the long-term costs of Medicare, Medicaid and Social Security, which together account for 40 percent of all federal spending other than interest on the debt. The recommendations would require a swift up or down vote by a supermajority of members of Congress, to assure bipartisan support for unpopular measures to cut sensitive spending programs or to raise taxes if necessary.

The chief authors of the measure, Senate Budget Committee Chairman Kent Conrad, D-N.D., and Republican Sen. Judd Gregg of New Hampshire, say they will attempt to attach their plan to must-pass legislation raising the government’s debt ceiling in the coming weeks. Others, including independent Sen. Joseph Lieberman of Connecticut and Republican Sen. George V. Voinovich of Ohio, are circulating similar plans.

Conrad held hearings Tuesday to drum up support for the approach. He was joined by a small group of lawmakers from both chambers warning that runaway government spending and a $1.4 trillion annual deficit were threatening to undermine the nation’s economy and the U.S. credit rating abroad. “It doesn’t take an economist to realize our course is unsustainable,” Voinovich said. “The federal government is the worst credit card abuser in the world and we’re putting everything on the tab of our children and grandchildren.”

McConnell, R-Ky., said he would have to see the composition and mandate of a commission before signing on, to make sure Republicans were adequately represented. But his comments echoed those of Conrad and others who believe a commission may be the only way to force Congress to come to grips with unsustainable spending on entitlement programs, the major cost drivers in the federal budget.

“I actually discussed that matter with the President back before he was sworn in and I indicated a willingness to discuss the appropriateness of having some kind of commission, and I’m willing to talk about that  particularly if the commission targets the real problem we have in the future which is the unfunded liabilities we have in Medicare, Medicaid and Social Security,” McConnell told reporters at a news conference.

The government is on track to accumulate deficits totaling $9 trillion between now and 2019, according to the Treasury and the Office of Management and Budget. While the administration’s spending in response to the recession and financial meltdown helped drive up the fiscal 2009 deficit to a record $1.4 trillion, most of the future problem will be due to rapid rises in entitlement spending on Medicare and Social Security for seniors and Medicaid for the poor and disabled. Experts say that these problems are not being addressed as part of the health care overhaul bill passed by the House last weekend or the plans being considered in the Senate.

The idea of threatening to hold up a measure allowing the government to raise the nation’s nearly $12 trillion debt limit to enable the Treasury Department to continue borrowing has attracted strong backing from Sens. Evan Bayh, D-Ind., 13 other Democrats and Lieberman. Bayh, who met late last week with Senate Majority Leader Harry Reid, D-Nev., to press his case for a commission, described the move as an “insurrection” by lawmakers fearful that the government was on an unsustainable spending path.

Lieberman said that it is essential to link action on a new debt ceiling with a commission to address the nation’s long-term fiscal problems “to ensure that we do not put ourselves or the nation into a position where we continually have to increase the nation’s debt ceiling limit to accommodate perpetual deficits and ever-growing national debt.”

Jim Manley, a spokesman for Reid, said the majority leader has been “actively talking with many of his colleagues and administration officials about this type of proposal,” but that no decision has been made. Manley emphasized, however, that “the process and policy needs to be a joint administration-House-Senate decision.” House Speaker Nancy Pelosi, D-Calif., opposes the approach, according to an aide, but House Majority Leader Steny Hoyer, D-Md., supports the concept.

The White House has signaled interest in the Conrad-Gregg commission approach, according to Conrad, but remains non-committal. During Tuesday’s Senate Budget Committee hearing, William Galston, a Brookings Institution senior fellow, said he has heard the administration may include a proposal for a bipartisan commission in the fiscal 2011 budget proposal that will be submitted to Congress early next year. The Office of Management and Budget declined to confirm or deny the speculation.

David Walker, the former Comptroller General of the United States, urged Congress to move swiftly next year to create a bipartisan commission to address the nation’s growing fiscal challenges.

“Importantly, everything must be on the table for any commission to be credible and to have a real chance of success,” said Walker, who is now president and CEO of the Peter G. Peterson Foundation. “This includes acknowledging the need to modernize the current social insurance programs, constrain federal spending, including defense spending, and raise additional revenues.”