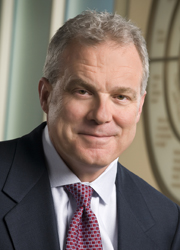 To a greater degree than most insurance company CEOs, Mark Bertolini has had his own first-hand experiences with the health system.

Bertolini, the head of the powerful insurer Aetna, faced a tough time in 2001 when his teenage son Eric was diagnosed with a rare form of cancer that was considered incurable. Bertolini moved into his son’s hospital room for more than a year during treatment. At one point, his son’s prognosis was so grim that the family decided to place him in hospice, a move that meant signing “do not resuscitate” orders and making other difficult decisions.

That experience, Bertolini says, later helped guide him to make changes to hospice policy at Aetna to make it easier for families. His son survived  with the help of a kidney transplant in 2007 from Bertolini  and is now a 25-year old studying particle physics.

In 2004, Bertolini himself came close to death after breaking his neck in a skiing accident, leaving him with some permanent injuries. He readily admits that his health problems would likely mean he would be rejected for coverage if he were to seek a policy on the individual market today. After 2014, however, insurers will no longer be able to reject applicants for medical reasons under the health law approved by Congress last year. That year, most Americans will also be required to buy coverage, a policy called the “individual mandate.”

Bertolini joined Aetna in 2003 and he became CEO and president in November. He’s also held executive positions at Cigna, NYLCare Health Plans, and SelectCare. He talked with KHN recently. Here are edited excerpts of the conversation:

Q: Can the health law work without the individual mandate?

A: In 2005, we were considered crazy because we came out and said we thought the individual mandate is essential to the health care system. We were the first company to say that. It’s about how insurance market pools work. We don’t think that in the individual mandate in the Affordable Care Act is strong enough. (Because the penalty for not having coverage isn’t high enough.) It’s pretty likely it won’t survive the constitutional challenge. Then we will have a whole different ballgame.

Believe me, there isn’t anyone in Congress or the White House who thinks [the law] can stand without the individual mandate. They would have to tackle the risk issue (people waiting to buy insurance until they fall ill). New York state and Washington state are good examples of what might happen. When Washington went to guaranteed issue with no coverage requirement and total community rating, the individual market collapsed in nine months and it still hasn’t revived. In New York, (which also requires insurers to take all applicants but does not require individuals to have coverage) you had almost half a million people in the individual market in 1996, now they have 60,000. And the cost is incredible.

Q: If you today were to try to buy an individual policy, would you be accepted or denied by insurers?

A: I would not get a policy given my personal medical history. I have one kidney. I have a broken neck from an extreme skiing accident. Given the experience with my son and myself, I’m uniquely prepared to see how to fix this system. I’ve watched it work from the inside. The Affordable Care Act is a reasonable start at creating a market-based approach to providing access to health insurance, not health care. Now (the question is) what is to be done about the underlying cost and the impact on premiums?

Q: Why are premiums going up 10 percent, 20 percent, even 30 percent or more in places like California, where Aetna and other insurers recently agreed to delay increases while state regulators do more review?

A: We’re talking there about the individual market, which is inefficient because people come in and out. What you’re seeing in California is that in January they went to unisex age rating. In the past, young males and older females had lower costs (premiums) than young females and older males, which in large part was because the females were of child bearing age and the older males had higher chronic disease rates. What state said is you can’t do that, it’s discriminatory. So we said fine, we’ll rate everyone the same. As a result, young males saw a dramatic increase in health care cost and younger females saw it come down a bit and older females saw an increase.

Q: Aetna has been expanding lately, buying a health information exchange company, for example. What is your strategy?

A: We recently bought Medicity, a health information exchange [company]. We’re using that as a platform to create a data exchange. We will shift risk (financial responsibility for medical costs) to the provider system. We’ll provide them cover with capital as re-insurers. We will be the Intel-inside, if you will. We have dozens of these conversations going on with major systems. We spend $400 million a year on new developments: We are as much a health information technology company as an insurer.

Q: What are some of the obstacles to changing the health system?

A: Part of where we are today with the health system and this act is because we can’t have a civil discourse on the policy. A real big flash point comes up with end-of-life care. Politicians will say ‘death squads: they’re going to put you in front of a committee and decide you’re going to die’. That’s just wrong, it’s not even remotely close. It doesn’t matter what side of the aisle you’re on, someone takes an issue that is good policy and turns it into a political dogfight that creates a dialogue that’s not helpful.

This version of this story corrects the description of Medicity.

As Hospitals Fill With COVID Patients, Medical Reinforcements Are Hard to Find

How COVID-19 Highlights the Uncertainty of Medical Testing