Dr. Donald Berwick, who oversaw Medicare and Medicaid until earlier this month, defended the programs Monday, but said they are trapped in a U.S. health system that promotes wasteful spending and inefficient care. 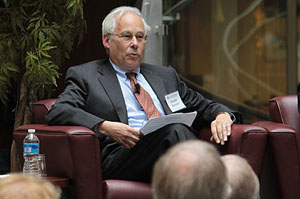 (Photo by The National Academy Of Sciences via Flickr)

“Health care is broken,” Berwick said in an interview with Kaiser Health News. “… We have set up a delivery system that is fragmented, unsafe, not patient-centered, full of waste and unreliable. Despite the best efforts of the workforce, we built it wrong. It isn’t built for modern times.”

Berwick said the 2010 federal health law is changing how doctors and hospitals are paid and deliver care through such new arrangements as accountable care organizations, which are designed to improve coordination and lower costs.

More From The Interview

But he said it is unclear whether such efforts would produce results quickly enough to hold off critics, including most Republicans, who want to make more radical changes that would shift more of the burden to beneficiaries. “That is the central question, the nub…whether that will happen fast enough, I just don’t know.”

Despite being considered one of the foremost authorities on health quality and safety, Berwick was a controversial pick as administrator of the Centers for Medicare and Medicaid Services after Republicans accused him of supporting rationing care. Berwick denies the charge, but noted both private insurers and government programs impose limits on what they will cover.

After Republicans said they would not confirm his appointment, President Obama appointed him during a congressional recess in July 2010, which meant he could serve only for 18 months. His last day was Dec. 2.

On other topics, Berwick told KHN:

— His failure to be confirmed did not affect his ability to get things done, though he would have preferred a longer term. “An agency of this size will do better with longer-term leadership commitment,” he said. Knowing his tenure could be short gave him a greater sense of urgency to achieve things, he said.

— His most challenging decisions involved state requests to cut Medicaid benefits and writing regulations to encourage doctors and hospitals to form accountable care organizations to work more closely, while not making the requirements overly burdensome.

— He criticized state efforts to limit hospital coverage for Medicaid recipients, currently under review by federal regulators. Hawaii has proposed a 10-day coverage limit on some enrollees; Arizona has proposed a 25 day limit.  “It’s a nonsensical idea,” he said.  “If a patient needs twenty days, the patient should get twenty days,” he said.

— Managed care done right is the best way to provide care, he said, but if states are not ready to take on the responsibility, it can lead to restrictions that prevent people from getting the care they need. Early in his career, Berwick worked for Harvard Community Health Plan, a nonprofit HMO based in Boston.

Berwick said he has not yet decided what to do next beyond spending more time with his family in Boston.