Listen here to Anna Gorman’s radio version of this story, as it ran on Here & Now.

LAS VEGAS — Kurt Fowler and his wife, Trina, were celebrating their 18th wedding anniversary at a country music festival when the shooting started. Fowler, 41, knew he’d been hit in the ankle and couldn’t run. He hid under the stage until the gunfire ended.

“I knew my foot was completely useless,” said Fowler, a firefighter from Lake Havasu City, Ariz., and a father of three. He underwent surgery, spent nearly two weeks in the hospital and still may need another operation. He also will need rehabilitation and follow-up visits with a specialist.

Fowler has a Blue Cross Blue Shield PPO through his job, but he said he doesn’t know how much he will have to pay out of his own pocket for the care he is receiving. In an era of higher deductibles and limited choice of in-network doctors, however, he knows he could face significant medical bills.

His insurance card says his individual deductible is $5,000 and his coinsurance 20 percent. He said he didn’t know how much his health plan would cover for out-of-state care.

“Medical expenses are astronomical these days,” Fowler said from his bed at Sunrise Hospital & Medical Center here. “It’s a mountain that just doesn’t seem like it’s gonna be climbable, but we are gonna do our best.”

As hundreds of survivors struggle to recover emotionally and physically from the Oct. 1 attack, they are beginning to come to terms with the financial toll of the violence perpetrated against them. Even those who are insured could face untold costs in a city they were only visiting.

The total costs of medical care alone could reach into the tens of millions of dollars, said Garen Wintemute, who researches gun violence at the University of California-Davis. And that is just the beginning. Many survivors will be out of work for months, if they are able to return at all.

“We really don’t have a good handle on the intangible costs of something like this … the ripple effects on family and friends and neighborhoods when a large number of people have been shot,” Wintemute said. 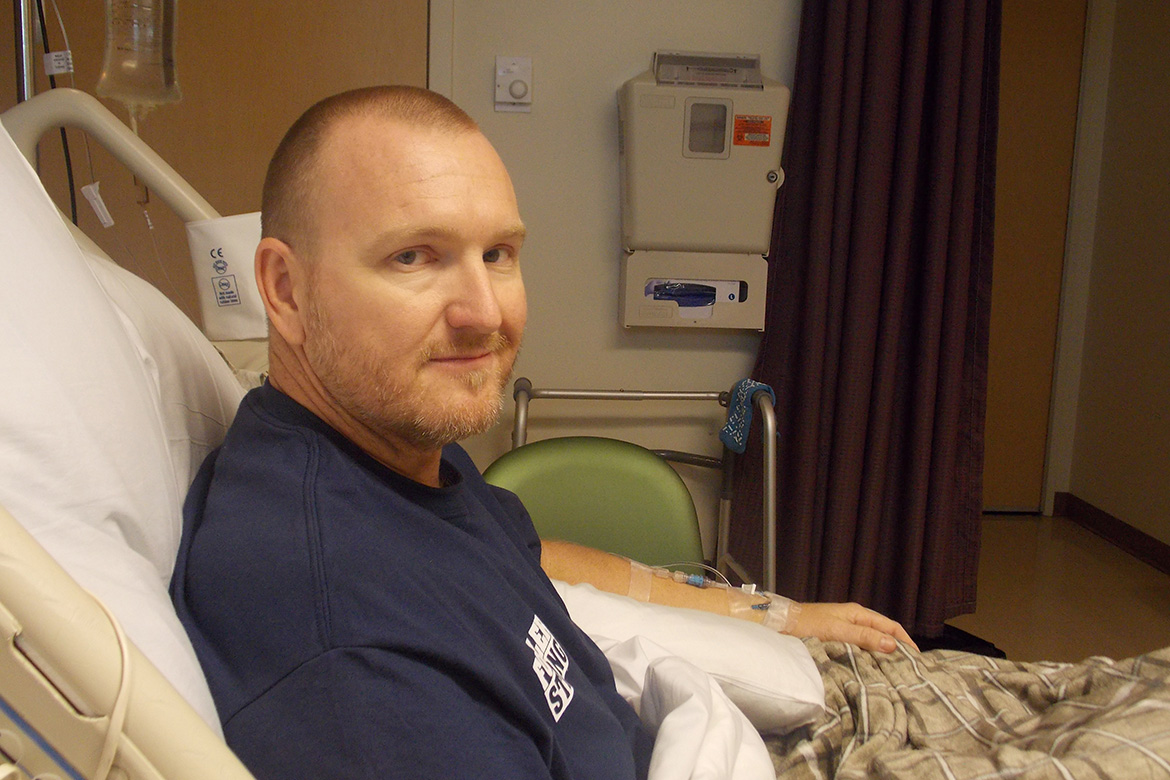 Fowler has health insurance through his job as a firefighter from Lake Havasu City, Ariz. But he doesn’t know what out-of-pocket medical costs he may face from the shooting. “Medical expenses are astronomical these days,” he said from a hospital bed at Sunrise Hospital & Medical Center. (Anna Gorman/KHN)

The U.S. senators representing Nevada, Dean Heller and Catherine Cortez Masto, wrote a letter to America’s Health Insurance Plans, an industry trade group, and CEO Scott Serota of Blue Cross Blue Shield requesting help with out-of-network bills, copayments and deductibles for the Las Vegas shooting victims. Many of the people who were shot had traveled from other states, including California, Iowa and Tennessee.

California and some states protect consumers from such bills, but Nevada is not one of them, said Sabrina Corlette, a research professor at Georgetown University’s Center on Health Insurance Reforms. But Corlette said most insurers allow patients to request exceptions based on the circumstances. “In this situation, I imagine most insurers are going to want to be compassionate and work something out,” she said.

The victims and their families aren’t the only ones who will be affected financially by the mass shooting. Taxpayers, too, pick up much of the tab for the health care costs associated with gun violence because many patients are covered by Medicaid and Medicare, two government insurance programs.

And hospitals will also be on the hook for some of the care for patients who don’t have insurance. Hospitals in Las Vegas quickly mobilized to treat the hundreds of victims who were streaming in that night, and they don’t know yet how much of the care will be reimbursed.

At Sunrise Hospital & Medical Center, staff treated more than 200 patients. Sunrise plans to file insurance claims and will “be extremely sensitive to the financial status” of patients when considering their out-of-pocket portions, a spokeswoman said.

Valley Hospital Medical Center is encouraging patients to complete paperwork for a state program called Nevada Victims of Violent Crime, which would pay their balances. And Dignity Health’s St. Rose Dominican said it will bill insurers and accept donations but will not require payment from victims.

California victims can also get help with medical expenses and income loss from the California Victim Compensation Board.

Kurt Fowler’s GoFundMe page has raised about $39,000. Fowler said he doesn’t have disability insurance so he will rely on the funds to help cover his expenses while he is recovering and missing work.

Michael Caster, 41, who lives in Indio, Calif., has a GoFundMe account that has raised about $26,000 so far. He’s paralyzed from the waist down after a bullet lodged in his spine. 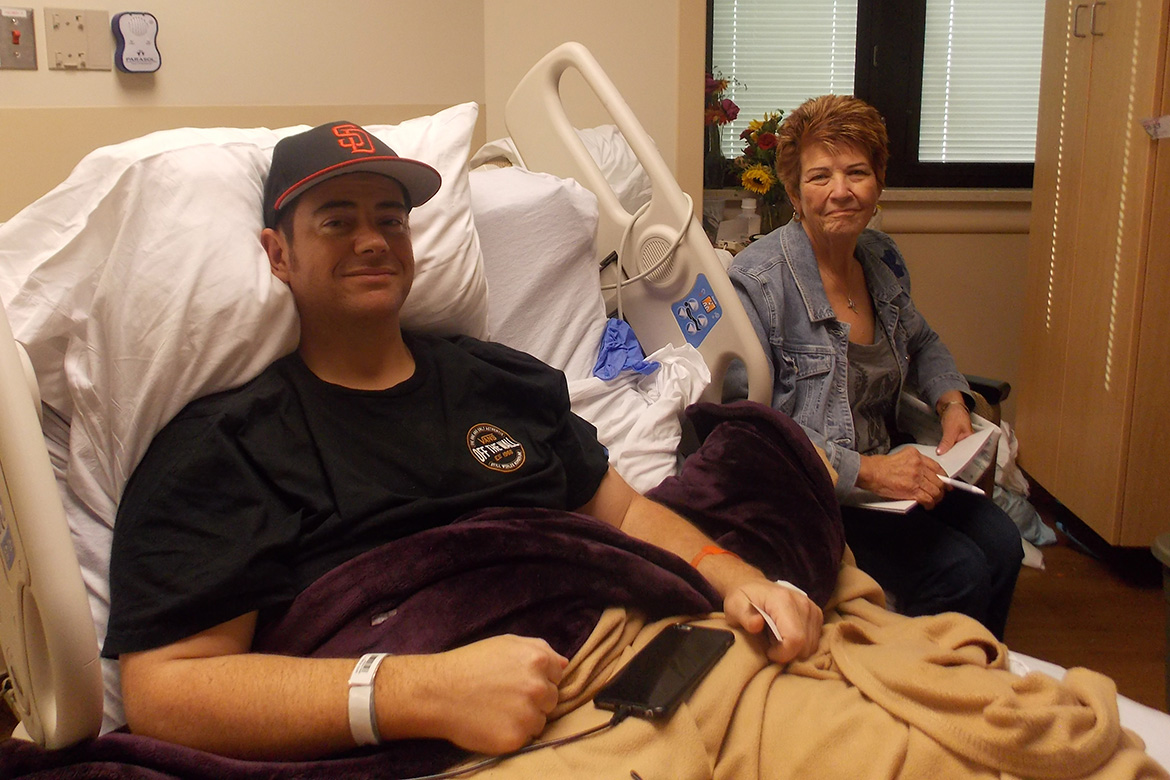 Michael Caster, from Indio, Calif., was shot as he ran from the Route 91 Harvest festival in Las Vegas. Now, he is paralyzed from the waist down. He spent about two weeks at Sunrise Hospital & Medical Center before being transferred to a rehab center for people with spinal cord injuries. Fowler’s mom, Patricia, was also at the festival and said she fears how expensive his medical care may be. But she said, “Whatever expenses come down the road, we’ll handle it somehow.” (Anna Gorman/KHN)

At Sunrise Hospital, doctors drained the blood from Caster’s lungs and removed some of the bullet fragments. Sitting in a hospital bed 11 days after the shooting, Caster said he didn’t know how much of his care would be covered by his health insurance.

He works in human resources at a California hospital and has a job-sponsored policy with Anthem Blue Cross. “I’ve never really dealt with injury,” he said. “I don’t want to be stuck with a bunch of bills.”

His bills could rise further: That day, he was scheduled to be flown to a rehabilitation center in Colorado for people with spinal cord injuries.

Mary Moreland, whose daughter Tina Frost was shot during the country music festival, said that at first she didn’t understand why so many families were setting up fundraisers. Then, the severe financial strain the shooting would take started to dawn on her.

Now, Moreland said she’s grateful for the $580,000-plus raised through GoFundMe.

Frost, a resident of San Diego, had emergency brain surgery the night of the shooting. A bullet had pierced her eye and exploded in her brain. As she lay in ICU earlier this month, her mother said small improvements were major milestones. “Today she squeezed my hands,” Moreland said.

The next night, Frost came out of a medically induced coma and was later flown to Johns Hopkins Hospital in Baltimore, near her mother’s home. Over the next weeks and months, she will need multiple operations and a slew of specialists, including neurosurgeons, plastic surgeons, occupational therapists and mental health counselors.

Moreland said she cannot even begin to imagine what her daughter’s care will cost. Frost has Blue Cross insurance through her job at Ernst & Young in San Diego, but Moreland said she doesn’t know what the deductible and copayments are.

“Being realistic, knowing what I know about costs of health care, it’s scary,” Moreland said. “But she’s alive. She’s not one of the 58 other people.”

Beyond The Shattered Lives And Bodies, Money Worries Weigh On Las Vegas Victims