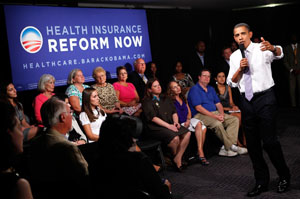 The health policy world has moved on from what happens IF the health law survives to what happens NEXT now that its future appears secure.

Bloggers are focusing on how the law will be implemented, what the role of states may be, how patient care will be affected and how the work left to be done will shake out. Here’s a sampling:

Health Affairs’ Blog has three pieces on how the law moves forward: The first from Christine Vestal and Michael Ollove, of Stateline, examines two key decisions facing each state: whether to join the Medicaid expansion and whether to create their own health insurance exchange. “Most Democratic-led states are expected to fully participate in both, although some may seek flexibility. But among the 30 states that will be run by GOP governors starting next year, it is unclear how many will opt in. Many predict that the federal government’s offer of covering the full cost of the Medicaid expansion for the first three years, and 90 percent after that, will be too rich for states to refuse” (11/8).

The second, authored by Chas Roades, examines the impact of the election on health systems and providers: “For most provider organizations, the election’s outcome represents a confirmation of the twin efforts so many have already started to control costs and transform patient care. A few implications stand out: Controlling costs and shifting management of cases to more efficient and higher quality settings remains critical in advance of potential Medicare payment reductions. … The transition toward new payment models will continue apace. … All eyes on the states as coverage expansion looms (11/7).

Timothy Jost also examines, in a third piece, what work remains to be done, including his hope for a technical corrections bill: “Finally, if a new spirit of bipartisanship settles on Washington, it would be nice to finally get a technical corrections bill through Congress to fix a lot of the glitches in the ACA that bedevil implementation.  But this would presumably open up the ACA to further special interest pleading and political point-scoring, and is perhaps too much to hope for” (11/7).

Bob Laszewski runs down an implementation to-do list on his Health Care Policy and Marketplace Review blog: “It will be implemented. It will also have to be changed but not until after it is implemented and the required changes become obvious and unavoidable. We can all debate what those things will be (cost containment is on top of my list) but it doesn’t matter what we think will happen–time will tell” (11/7).

At The Health Care Blog, Dr. Joanne Conroy looks at the role academic medical centers and teaching hospitals have in carrying out the law: “The Obama team can ignore the growing physician shortage — but at their peril. Unfortunately, we also continue to debate within specialty societies about who should provide the services, rather than talking about how we can deliver care as a team more efficiently. Use of interprofessional teams holds great promise for improving the efficiency of the physician workforce, and we anticipate that the administration will continue to support innovative reforms in health care delivery” (11/7).

At The Daily Beast, David Frum points out four things Republicans can do about implementation of the health law. Among them: “We should call for reducing regulation of the policies sold inside the health care exchanges. The Democrats’ plans require every policy sold within the exchanges to meet certain strict conditions. American workers will lose the option of buying more basic but cheaper plans. It will be as if the only cable packages available were those that include all the premium channels. No bargains in that case. Republicans should press for more scope for insurers to cut prices if they think they can offer an attractive product that way” (11/7).

Peter Suderman at Reason also weighs in: “The federal government faces other challenges to setting up its own exchanges as well. For one thing, there was no money appropriated to build the federal exchanges. Perhaps money can be found, but so far no one knows where. One adviser charged with helping Department of Health and Human Services create those exchanges has admitted that in order for HHS to build the exchanges, the federal government will likely have to ‘get creative about the financing.’ … Those who oppose Obamacare are going to have to learn to live with the law. But those who support it are going to have to learn to live with its inevitable failures” (11/7).