Nearly any comment from a sitting president can elicit negative feedback from opponents. But when a president takes on the Supreme Court — and raises questions about the proper role of the judiciary vis-a-vis Congress — the response can be swift and loud. 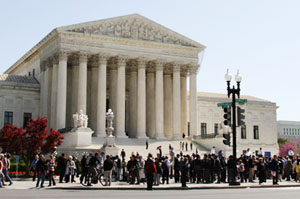 That’s the case this week as the blogosphere reacts to President Barack Obama’s comments that he is confident the Supreme Court will uphold the health reform law and warning the court not to engage in “judicial activism.”

At Reason, Steve Chapman writes that punishing judges for exercising their duties would call into question the entire constitutional system: “In any event, Obama’s criticism could well have come from a hard-line conservative with a crabbed view of the role of the judiciary. … Conservatives, of course, exhibit a strange new respect for judicial review, which they have often reviled for letting unelected elitists ride roughshod over prevailing public opinion. But that’s no excuse for Obama to suggest that the court would be acting illegitimately in striking down his health care plan.”

At the Cato@Liberty blog, Roger Pilon writes that Obama’s comments are a gift to conservatives: “After the Court’s oral arguments over ObamaCare, it’s finally dawning on modern liberals that their project for ubiquitous government is under serious political and even legal attack, so they’re fighting back. … What Obama and his liberal apologists fail to accept, of course, is that their welfare-state project is spent, literally. They pose as defenders of welfare programs for the poor and, now, the middle class, while either ignoring the deficits and debt those programs have run up or, at best, arguing that taxing the rich will solve the problem, all evidence to the contrary notwithstanding.”

Jonathan Cohn of the New Republic, however, argues that Obama was not seeking to intimidate the court: “At most, Obama was warning that he took the case seriously and was prepared to criticize the court, loudly, if it ruled the law unconstitutional. Surely that’s within acceptable bounds of presidential behavior.” Using the Supreme Court case Lochner v. New York to illustrate its implications for economic law in America, Cohn writes Obama meant: “By invalidating the Affordable Care Act, the Supreme Court would be resurrecting a vision of constitutionally limited government that, quite rightly, went out of fashion a long time ago.”

In the meantime, Sen. Chuck Grassley, R-Iowa, called Obama “stupid” for his comments on the Supreme Court. Ian Millhiser writes at Think Progress: “Obama’s statement, which closely mirrors rhetoric President George W. Bush used throughout his presidency, sent those very same conservatives into apoplexy. … Grassley’s objection to President Obama would have far more credibility if Grassley himself did not have a long history of using this very same rhetoric. Indeed, as recently as 2011, Grassley harshly criticized people who ‘turn to the courts’ after they ‘can’t get their policy views enacted through the legislative process.’”

At The Volokh Conspiracy, ﻿Orin Kerr ﻿examines if it would indeed be “judicial activism” if the Supreme Court strikes down the health reform law: “In my experience, there are several different things people might mean when they label a judicial decision as ‘activist.’ … (1) The decision was motivated by the Justices’ personal policy preferences or was result-oriented. … (2) The decision expands the power of courts to determine the rules of our society. … (3) The decision was not consistent with precedents. … (4) The decision struck down a law or practice. … (5) The decision was wrong. … As I have explained many times before, I think existing Commerce clause precedents combined with the presumption of constitutionality point pretty clearly in the direction of upholding the mandate. … Depending on how the decision might be written, a decision striking down the mandate could fairly be called activist in some ways but not in other ways.”

In the meantime, Ezra Klein, at The Washington Post’s Wonkblog, also writes about the Commerce Clause, and how a Supreme Court ruling against the individual mandate might be seen as a product of a long-held conservative view of that constitutional provision: “Based on existing precedent, the individual mandate is clearly constitutional. Free riders in the health insurance market clearly have ‘a substantial economic effect on interstate commerce.’ But many conservatives believe the Supreme Court has been wrong on the Commerce Clause for seven decades now. The problem, in other words, isn’t so much the individual mandate as the large body of case law that makes the mandate — and so much else that the federal government does—constitutional. That’s where you get Republican politicians like Rick Perry arguing that almost everything the federal government does— Medicaid, Medicare, Social Security, etc. —is properly understood as unconstitutional.”