Blue Shield of California, which earlier this year pledged to cap its profits at 2 percent, took public Tuesday a contract dispute with UCLA Medical Center, which saw a nearly 17 percent operating margin this year. 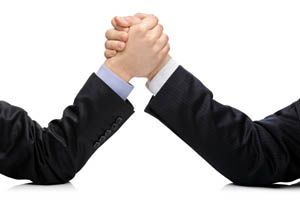 Unless the two can agree on contract terms by the end of the year, some Blue Shield customers who use UCLA or affiliated hospitals and doctor groups will face sharply higher out-of-network charges. The two have fought before — in 2006 and 2008 — over how much the insurer will pay in its contract rates.

What’s different about this year’s dispute, according to Blue Shield, is that UCLA wants to negotiate its rates as a group with four other University of California hospitals. In its open letter posted Tuesday, the insurer calls that move “an orchestrated negotiating strategy that the university’s own executives had described as an effort to increase bargaining leverage.”

End-of-the-year contract disputes between hospitals and insurers are common nationwide, with each side working to gain an advantage. Taking the fight public – outlining in the media the threat that patients may have to change hospitals, doctors or both – is not unusual either. Underlying these disputes are difficult policy questions about market share and the growing market consolidation in many parts of the country.

While hospital consolidation has the potential to streamline services and make hospitals more efficient, taking a larger slice of market share can also allow hospitals to dictate higher prices, economists say.  At the same time, insurers with large market share can dictate lower payment rates, which could slow premium growth, but also could hamper the ability of hospitals or doctor groups to provide services.

For its part, UCLA says in a written statement that it remains open to negotiating an agreement with Blue Shield as part of the University of California Health System. The agreement, it says, would need to adequately reimburse “UCLA physicians and hospitals for the high-quality, complex medical care provided to our patients in a cost-conscious environment.”

UCLA’s most recent financial statements show the hospital made an operating margin of 16.8 percent for the fiscal year ending in June 2011, up from 13.4 percent in 2010.   At the same time, UCLA’s total operating expenses rose by nearly $83 million, or 6.1 percent, from the previous year.  UCLA reported that this increase was primarily due to “increased salary and employee benefits, medical supplies, purchased services and an increase in depreciation costs.”

Blue Shield says UCLA’s rates have increased 98 percent since mid-2006 and its hospital charges are 41 percent higher than the average in Southern California.  UCLA’s statement did not confirm or dispute those numbers. So far, Blue Shield has issued credits of more than $450 million to customers for exceeding its profit cap in 2010 and this year.

“Because we’ve capped our profits at 2 percent, every penny that we pay UCLA and other providers ultimately must come from our customers who are already suffering,” the Blue Shield  letter says. “We believe UCLA Medical Center should curtail its relentless rate increases.”