Marc Fucarile reached a huge milestone this week: He was one of the last two Boston Marathon survivors to be released from the hospital. Fucarile spent 45 days in Massachusetts General Hospital, and he hopes someday to return to work with a roofing company. 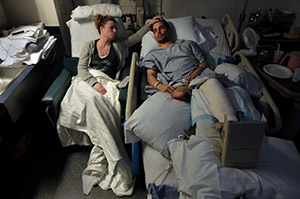 Jen Regan spends time with Marc Fucarile during his hospitalization at Massachusetts General earlier in May (Photo by Bill Greene/The Boston Globe via Getty Images).

But first he will have to have rehab, and he wonders how he will pay for it.

He lost his right leg, and he’ll get some compensation from a victims’ fund called the Boston One Fund. But the deadline to apply for that is in two weeks, and the full extent of Fucarile’s injuries — his left leg was also badly hurt and he suffered head injuries — will not be known for years.

Almost $38 million has been donated so far to One Fund, and survivors with permanent brain injuries or those who lost both legs will receive more money than single amputees. But the application, based on injuries to date, is due in two weeks and there are no plans to extend the deadline.

Fucarile’s not complaining, but he’s also not sure which category fits him.

“The One Fund’s a great thing. I can’t believe how many people have stepped up,” he says. “The good that’s out there in this world is just phenomenal. And, you know we’re all hurting.  I don’t know what my outcome’s going to be when I get out of here, and what kind of bills I’m going to have. And that’s starting to stress me out.”

From his bed on his last day at Mass General, Fucarile described what happened to him on April 15.

By the time a firefighter finished applying a tourniquet to Fucarile’s leg, all available ambulances had left the marathon finish line full of casualties. A police officer carried Fucarile, his skin still smoldering, to a van typically used to transport prisoners and raced to the hospital. It was a rough ride.

“I think I might have been on a bench part of the seat, and the firefighter was trying to hold me on there. I don’t know, I was slamming my head a lot,” Fucarile remembers.

Surgeons told Fucarile that if he had arrived two or three minutes later, he would have died.

In the hospital, he endured multiple procedures including surgeries, skin grafts, induced comas and dozens of tests. In rehab, he will have to start rebuilding his arm strength first because his legs are still too damaged for physical therapy.

He looks down and cups the stub of his right thigh, the wound layered in bandages.

“It’s still wide open. It hasn’t been healed or shut yet,” he says. “It has its moments where it has sharp pains, and the meds can’t do nothing about it.”

Fucarile’s left leg, in a knee-length cast, is red, scarred and still riddled with scrap metal.

“The left leg is improving. It’s questionable how functional it’s going to be. Potentially I could be a double amputee,” says Fucarile. “But the doctors have a strong hope for it. It’s going to take me and therapy to get it to really work.”

Family members pack Fucarile’s room for a send-off. Doctors and nurses stop by, too, remembering a charred, mangled man, barely holding onto life. To nurse anesthetist Amanda Heidbreder, who saw him that day in the operating room, Fucarile was simply Distress Patient C.

“I felt determined that I was going to find out what his name was, who he was, what he was all about, and now I know,” she says. “He’s an inspiration to a lot of people. The evil that happened is not going to beat him. He’s going to beat it.”

Jen Regan is Fucarile’s fiancee and the mother of their five-year-old son, Gavin, who cries at night, asking for his dad. But on this day, Regan cries too, tears of relief and gratitude.

“Every day’s been a step forward and then four steps back, and finally we have a solid step forward,” Regan says. “I’m excited for Gavin to see him in a new place, and, you know, it’s just a good day.”

Regan and Fucarile hope to marry soon. But she’s told Fucarile it won’t happen until he’s ready to dance.

Fucarile won’t know if his left leg can be saved for a year or more. He expects therapy and related costs to continue for the rest of his life.

At this point, his share of One Fund probably won’t come close to covering his costs. Fucarile has health insurance, but he worries it won’t pay all his medical bills.

Like the relatives of many who were injured in the bombing, his sister set up a separate fund that has raised almost $150,000. But a state-of-the-art prosthetic limb costs more than $100,000, and they wear out every three years or so.

Fucarile may also be helped by prosthetic makers who have volunteered to donate their devices to the Boston Marathon survivors.

This story is part of a partnership that includes WBUR, NPR, and Kaiser Health News.