It’s just the crumb of a muffin but Martha Galvis must pick it up. Lips clenched, eyes narrowed, she goes after the morsel, pushing it back and forth, then in circles, across a slick table top.

“I struggle and struggle until,” Galvis pauses, concentrating all her attention on the thumb and middle finger of her left hand. She can’t get them to close. “I try as much as I can. And if I do it I’m so happy, so happy,” she says, giggling. 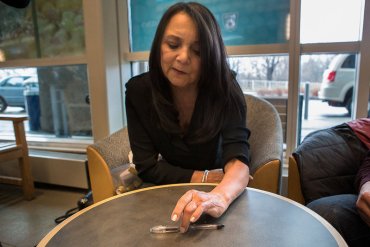 Martha Galvis has undergone 16 surgeries for her hand, which was injured in the Boston Marathon bombing. (Jesse Costa/WBUR)

Galvis, 62, has just finished a session of physical therapy at Brigham and Women’s Faulkner Hospital where she goes twice a week. She’s learning to use a hand doctors are still reconstructing. It’s been two years since she almost lost it.

On April 15th, 2013 Martha and her husband Alvaro Galvis headed for three spots from which they’d enjoy the race and boisterous crowd. Their last stop would be at or near the finish line.

Watching the marathon was a ritual that began in the mid 1970s when the Galvises, who are both from Columbia, met in Boston. Their three children grew up with the marathon as family holiday. The Galvises planned to continue the annual event after retirement.

“But not anymore,” says Martha Galvis, waving both hands in front of her face. “I don’t feel secure to do this.”

The former preschool teacher tries not to think about the moment when a pressure cooker bomb placed on the ground exploded, hurling nails and BBs into her left leg and hand. It was just at that moment that Galvis reached down for her bag at her feet.

Dr. George Dyer, with Brigham and Women’s Hospital, began rebuilding Galvis’s hand about 30 minutes after the bombs went off. Dyer decided he would try to save everything except Galvis’s ring finger.

“She had a very beautiful wedding ring that was two fine bands kind of wrapped around each other,” Dyer says. “The force of a bomb going off right next to your hand, it’s kind of like a miniature hurricane. It unwrapped these fine gold bands and then wrapped them together very tightly around her finger and just cut it off in place.”

Dyer picked pieces of the wedding ring out of bone and tissue and saved them for Galvis. He salvaged parts of the ring finger to replace joints and tissue missing from its companions. In surgery number 16, Dyer took bone from Galvis’s hip, where the marrow has the best potential to stimulate healing, and grafted it to a joint in her pinky. Doctor and patient are waiting to see if she’ll need further operations. Galvis calls Dyer a magician.

There were just a few serious hand injuries because the deadly spray went sideways, not up. Martha Galvis also severed nerves in her left leg. Two years of surgery and rehab, Galvis feels worn down. 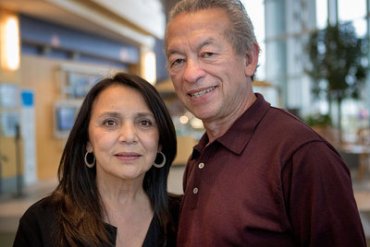 Martha and Alvaro Galvis used to travel from New Hampshire to Boston to watch the marathon every year. They were both injured in the bombing two years ago. (Jesse Costa/WBUR)

The jeweler in Boston who made Galvis’s original wedding ring took the shattered, twisted pieces and molded a new band. But Martha Galvis, who is devoted to her husband, says that for a long time, she was afraid to put it on.

“It’s silly maybe,” Galvis says with a sheepish shrug, but she says she couldn’t shake the worry that, “something might happen and I could lose my hand again, the other hand.”

For some marathon bombing survivors, the emotional and psychological scars are healing more slowly than the physical ones. Martha Galvis pauses and reaches over to stroke the back of her husband.

“People tell me time heals, but it’s a very slowly turning clock to me,” says Alvaro Galvis. He is a health insurance salesman. He had two surgeries to repair his leg. He says a 1 inch by 2 ½ inch piece of pressure cooker removed from his right leg was introduced as evidence in the trial of now convicted bomber Dzhokhar Tsarnaev.

Alvaro Galvis struggles with flashbacks, he’s jittery and anxious. He says he can’t get used to the feeling that he has no control over his surroundings.

“You think about a lot of things you know, in two years of trying to understand,” says Galvis. “That’s part of the healing.”

Neither Alvaro or Martha Galvis has been able to return to work since the bombing and they aren’t sure if they ever will. They say they were getting better, before the trial. But with the verdict last week, the race anniversary this week and sentencing next week, they are constantly on edge. So Martha Galvis prays.

Martha and Alvaro Galvis stop the interview. This is too much for them. They leave the hospital arm in arm, supporting and protecting each other as they enter a world they’ve learned they can not control.