Donella Pogue has trouble finding dentists in her rural area willing to accommodate her 21-year-old son, Justin, who is 6 feet, 8 inches tall, is on the autism spectrum and has difficulty sitting still when touched.

And this summer, he had a cavity and his face swelled. Pogue, of Bristol, New York, reached out to the Eastman Institute for Oral Health in Rochester, which offers teledentistry.

Dr. Adela Planerova looked into his mouth from 28 miles away as Pogue pointed her laptop’s camera into her son’s mouth. Planerova determined they did not need to make an emergency one-hour drive to her clinic. Instead, the dentist prescribed antibiotics and anti-inflammatory drugs, and weeks later he had surgery.

Teledentistry allows dental professionals like Planerova to remotely review records and diagnose patients over video. Some smile about its promise, seeing it as a way to become more efficient, to reach the one-third of U.S. adults who federal figures from 2017 estimate hadn’t seen a dentist in the previous year and to practice more safely during the pandemic.

But others see it as lesser-quality care that’s cheaper for dental professionals to provide, allowing them to make more money. At the same time, widespread adoption is hindered by issues such as spotty internet and insurance companies unwilling to reimburse for teledentistry procedures.

Dr. Christina Carter, an orthodontist in Morristown, New Jersey, said teledentistry has its place but shouldn’t replace time in the dental chair.

“It cannot be used for a full diagnosis because we need other tools, like X-rays,” she said. “We have all tried to see things on our phone or even on a Zoom call, and there is still just a different feel.”

Still, as the pandemic curbs in-person visits and reduces dentists’ revenue, more dentists are seeking guidance from Dr. Nathan Suter, a leading teledentistry advocate who owns the consulting company Access Teledentistry. Since March, he said, he’s done webinars for about 9,000 dental professionals, up from fewer than 1,000 in the three years before the pandemic.

Teledentistry providers trace the practice to 1994, when the Army launched a pilot program in which health care providers used an intra-oral camera to take photos of a patient’s mouth at a fort in Georgia and then sent them over the internet to a dental clinic at a fort 120 miles away.

Over the next two decades, dentists in upstate New York and the San Francisco Bay Area led teledentistry pilot programs for underserved children, some of whom were in preschool and already had cavities. The number of children who completed the prescribed dental treatment rose significantly.

Supporters say teledentistry can help reach the 43% of rural Americans who lack access to dental care. Medicaid and the Children’s Health Insurance Program will pay for many dental procedures for those enrolled in those programs, but only 38% of dentists participate in those programs, according to the American Dental Association. One reason: Medicaid typically reimburses at a significantly lower rate than those of private insurance plans.

Teledentistry could help dentists treat more patients and make more money a number of ways. If dentists remotely review data captured by hygienists, they can see more patients. Because video appointments save them time, dentists then have room for the people “who need the more expensive services” while also focusing on preventive care, said Kirill Zaydenman, vice president of innovation for DentaQuest, an administrator of dental insurance and oral health care provider. 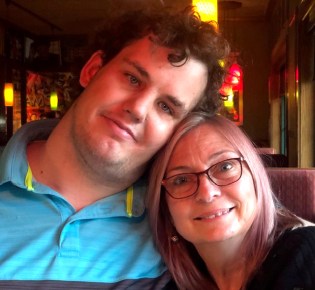 Donella Pogue says that teledentistry was the best option for her 21-year-old son, Justin, when he had a cavity this summer that caused his face to swell. Justin has special needs and was able to see the dentist from the comfort of home. (Donella Pogue)

But dentists have not widely adopted teledentistry — mainly because they’ve had difficulty getting insurers to pay for it, said Dr. Dorota Kopycka-Kedzierawski, a Rochester dentist. That’s partly because of insurers’ concerns about fraud. Dr. Paul Glassman, who started the Virtual Dental Home project to reach underserved preschool children in the Bay Area, considers those fears “completely incorrect.”

“If you want to bill for something you didn’t do,” he said, “you can do that just as easily in an in-person environment as you can using teledentistry.”

Since March, as the pandemic descended, most, if not all, private dental plans have been reimbursing for teledentistry, said Tom Meyers, vice president of public policy for America’s Health Insurance Plans, a trade organization. And all state Medicaid programs now reimburse for teledentistry in some form, Glassman said, though policies differ by state and some practices may not be covered in some places.

But teledentistry isn’t reimbursable under Medicare. (Most dentistry isn’t.) Another obstacle to widespread adoption: Some dentists and lawmakers connect teledentistry to companies offering at-home teeth aligners with little or no in-person contact with a dentist. Glassman has promoted teledentistry throughout the United States and reviewed proposed legislation or regulations in states such as Idaho, Massachusetts and Texas. He said he hears concerns from dentists about the lack of an in-person exam during which X-rays are taken. Such concerns are reflected in some legislation.

SmileDirectClub, an at-home teeth-aligner company, has argued in statehouse testimony that in-person care is not always needed. The company opposed a 2019 bill in Texas that aimed to improve access to dentistry in rural areas because it included a number of restrictions on teledentistry, including one that would have required an in-person dentist’s examination if a teledentistry provider treated that patient for more than 12 months.

SmileDirect’s attorney argued at a hearing the rule “could interrupt the course of a patient’s treatment.”

Proponents argue teledentistry isn’t just about making more money. Pogue, the New York woman, said it was the best option for her son with special needs.

“He is really afraid of dentistry, so when he goes to see someone, he is really tense and really jumpy, so that’s another reason the teledentistry was nice was because he was in my bedroom doing it, so he was really comfortable,” said Pogue, 53, whose son is covered by Medicaid.

A few weeks later, Justin did have to have surgery, which went “perfect,” his mom said.

Some dentists say teledentistry faces particular stumbling blocks in rural areas. Dr. Mack Taylor, 36, a dentist who grew up in the small town of Dexter, Missouri, now practices in a health center just down the road. Twenty years ago, he said, Dexter had eight dentists. Now there are only three.

Technology is a major obstacle for local residents, many of whom lack reliable internet service. Taylor recently applied for a U.S. Department of Agriculture grant that would give him $26,500 to buy equipment so that, for example, a hygienist can take photos inside the mouths of nursing home residents and send them to Taylor to review.

“It’s not like medicine where you can discuss someone’s ailments and have a good idea what’s going on,” Taylor said. “Maybe all you can tell me is ‘I have a broken tooth,’ but I can’t physically see what’s going on and prescribe the right treatment.”