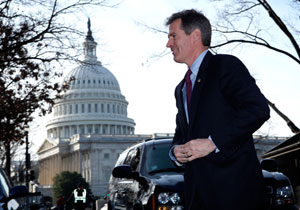 After Scott Brown’s (R) win in Massachusetts’ special election, Democratic leaders no longer have a filibuster-proof majority in the Senate and are weighing the use of arcane budget rules to pass at least part of the long-debated health overhaul package.

The procedure, known as “budget reconciliation,” likely would limit the scope of the legislation. But it would also permit a bill to pass with a simple majority of 51 votes.

Budget reconciliation, a provision of the 1974 Congressional Budget Act, is designed to force committees to make changes in mandatory  or entitlement  spending and revenues, such as Medicare. It was conceived by lawmakers as a way to bring down the deficit by easing the path for budget and tax deals.

The rules for budget reconciliation in the Senate restrict the procedure to provisions dealing with the budget. They also set strict protocols for consideration of the bills in both chambers. Under the procedures for reconciliation bills, debate in both houses is limited to 20 hours, and no Senate filibusters are allowed.

Congress has used reconciliation occasionally for non-budget legislation, including rewriting health care and welfare policy, as the Republican majority did in passing major welfare reform in 1996.

But the authors of budget reconciliation never envisioned the procedure as a fast-track system to enact complicated social policy measures. Indeed, Sen. Robert Byrd, D-W. Va., the patriarch of the Senate and a master of its rules, helped design a set of six conditions under which any portion of a reconciliation measure could be deemed “extraneous” to the budget — neither adding to nor subtracting from the deficit — and could be excised unless it garnered at least 60 votes.

Resorting to budget reconciliation is the legislative equivalent of breaking out the heavy artillery in a pitched battle. Since the early 1980s, it has been used 19 times, primarily to steer controversial fiscal and budgetary policies through the Senate, including former President Bill Clinton’s fiscal 1994 deficit reduction and tax package and President George W. Bush’s major tax cuts.

What Would The Democrats Gain By Using Reconciliation?

Since filibusters, which take 60 votes to stop, are banned under the reconciliation procedures, Democrats could pass health reform legislation with a simple 51-vote majority. That would allow the Democrats to pass a bill without Republican support and even with a few Democratic defections.

Does The Procedure Have Disadvantages For Democrats?

Lawmakers and policy experts on both sides of the aisle warn that the strategy could backfire on the Democrats by leaving important provisions of the bill vulnerable to a parliamentary challenge and by making the Democrats appear overly partisan and high-handed. In addition, since the bills could deal only with issues of budget and spending, some social policy issues covered in the current legislation, such as abortion funding and coverage of immigrants, might not be allowed.

There could be technical problems as well, including questions about the timing of the measure. The congressional budget resolution on which reconciliation would be based covers five years, but most of the calculations for spending and saving in the current health overhaul are based on a 10-year horizon. Trying to marry those two timeframes could result in thorny “sunset” questions about whether elements of the health reform would be phased out after five years and then need to be reauthorized by Congress.

How Would It Work?

Every year, the House and Senate draft a budget resolution  a blueprint of anticipated federal spending and revenues for the coming fiscal year. To get the reconciliation process going, the House and Senate budget committees may include reconciliation instructions to one or more committees in the budget resolution that directs them to produce legislation by a certain date that meets the mandatory spending or tax targets.

Last spring, the budget committees agreed to include a directive for health care legislation at the behest of Democratic leaders and White House Chief of Staff Rahm Emanuel.

If reconciliation is used, the Senate Finance and health committees each are supposed to send proposed changes in laws within their jurisdictions to the Senate Budget Committee with changes that would save $1 billion over the next five years. The House Ways and Means, Education and Labor and Energy and Commerce Committees would face a similar challenge and have to report changes to the House Budget Committee.

Those proposed changes would then be translated by each budget committee into House and Senate bills.

When those bills reach the House and Senate floors, members have a maximum of 20 hours to debate them  and almost no opportunity to offer amendments  before taking a vote. In the Senate, the bill may be challenged on the floor by any senator who asserts that a provision runs afoul of the “Byrd Rule.”

Assuming that the House and Senate bills are approved, they generally are sent to a conference of House and Senate negotiators to be melded into a single piece of legislation. That final conference report, as it is called, is then returned to the floor for a final vote by the two chambers under strict rules that set a timetable for action and that prohibit any amendments. The compromise measure is also subject to Byrd Rule objections. If the bill is passed, it would then be sent to the president for his signature or veto.

This article is a condensed version of a KHN story and sidebar  that ran in August.

How The Budget Reconciliation Process Works