Sarah Mackin runs a cotton swab around the inside of a tiny plastic baggie that appears empty. She spreads whatever residue the swab picked up onto a test strip that resembles a Band-Aid, then slides the strip into a buzzing machine about the size of a boxed, take-home pie. Then she waits, hoping for information that she can share with Boston’s community of opioid users.

Mackin is using an MX908, a mass spectrometer initially marketed as a counterterrorism tool. The machine can help military teams looking for traces from biological or chemical weapons, or hazardous material specialists trying to identify materials present in spills or explosions. But now the MX908 has been commandeered in the fight against fentanyl, one of Boston’s — and the nation’s — top killers.

The machine rapidly analyzes a sample of drugs and can detect and identify dozens of types of fentanyl — a synthetic opioid that is 50 times more potent than heroin. Increasingly, fentanyl is mixed with heroin and cocaine, often without the user’s knowledge, and it has become a major contributor to fatal drug overdoses in recent years.

It’s too early to know how helpful the MX908 could be in lowering the mortality rate in the country’s ongoing drug abuse epidemic. But that’s why Mackin, the director of harm reduction services at the Boston Public Health Commission, is field-testing the machine.

Mackin looks down at a screen that spans the top of the MX908 and taps an icon labeled “drug hunter.” 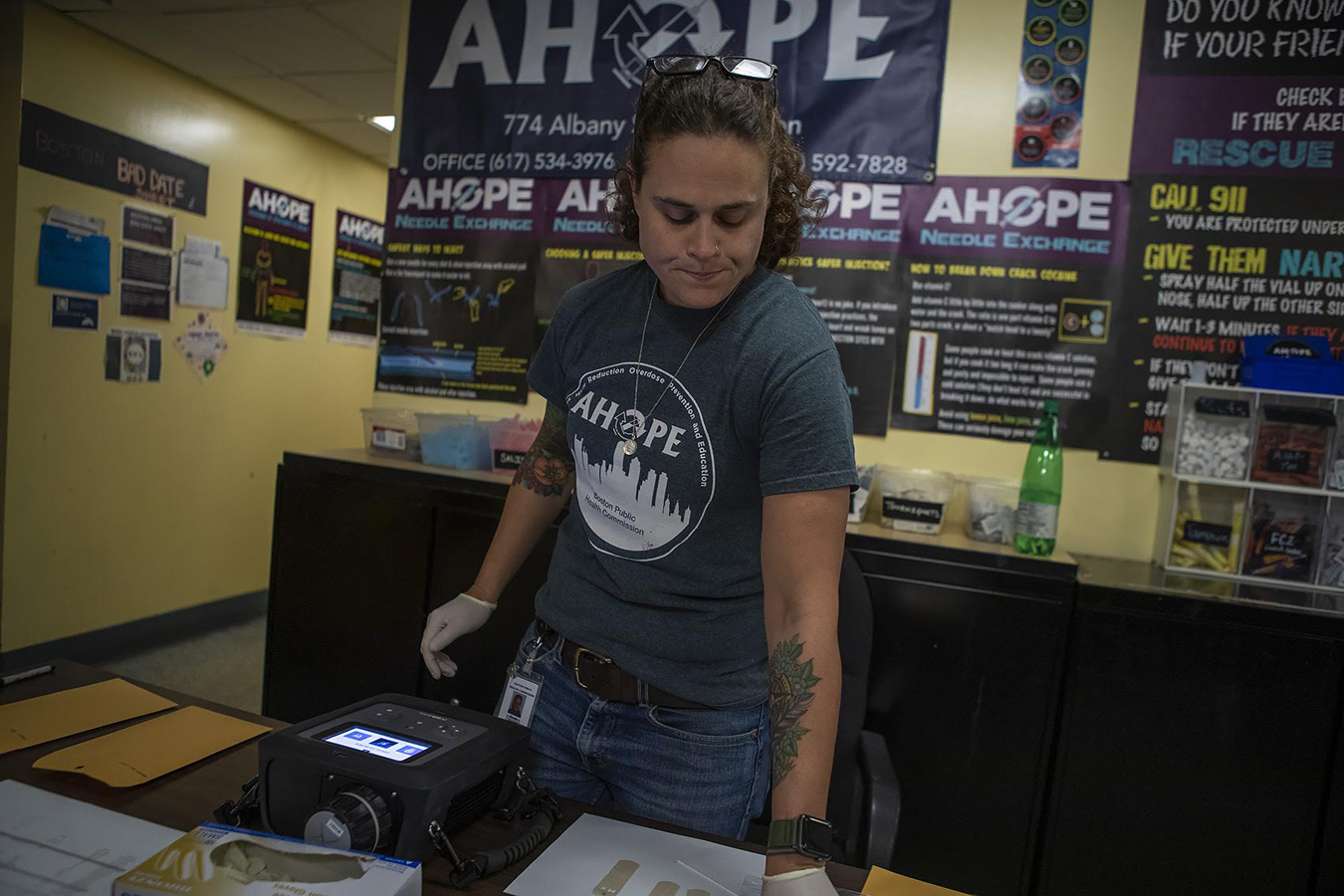 Sarah Mackin of the Boston Public Health Commission prepares the MX908 for testing some samples.(Jesse Costa/WBUR)

“This is something that was sold as heroin,” Mackin said, dangling the baggie as the machine whirs through its cycle. The MX908 can identify 70 specific types of fentanyl in a tiny sample, and alert users about the presence of more than 2,000 not-yet-named fentanyl analogues.

It also detects the presence of MDMA, cocaine and meth — all based on tiny samples left at the tip of a needle, or even wiped onto a cotton ball. About 30 seconds after starting the test, Mackin watches red and yellow warning symbols flash across the screen.

“Oh yeah,” Mackin said, nodding her head. “So, there’s multiple kinds of opioid analgesics and multiple kinds of synthetic fentanyls in this sample that was sold as ‘heroin.’ It’s kind of an example of what the drug landscape looks like here.”

The illicit street drugs sold in Boston probably crossed international borders. They may have been cut and remixed multiple times as they moved along the supply chain. Drug users rarely know for sure what they are buying. Drug-testing devices like the MX908 can help identify additives that raise the risk of overdose.

Take the experience of a woman named Bri. (KHN and NPR are using only Bri’s first name because she uses illegal drugs.) One day last July, Bri brought in residue from some of her drugs when the machine was set up in downtown Boston. On that day, she had three different samples. Bri had already overdosed on a hit from one of the bags.

“That’s why I wanted it tested,” Bri said. “I thought there was carfentanil in it.”

Carfentanil, sometimes called the elephant tranquilizer, shows up in the Boston drug supply sporadically, along with other increasingly powerful and deadly forms of fentanyl.

In Bri’s case, one of her samples showed no trace of drugs at all, one tested positive for a medical-grade fentanyl, and the third showed traces of a substance in the potency range of carfentanil.

“Now, I’m going to be honest,” Bri said. “If I was sick and I had one bag of dope on me and you told me there’s carfentanil in there, I’m not going to lie and say I wouldn’t use it. But I would know to not put the entire thing in.”

Bri said she knows ingesting that particular sample would be a very risky move. But with that knowledge, there are steps she can take to reduce the risk of death: She can use the drugs in the presence of a buddy who can observe her for signs of overdose. Bri also carries naloxone, a drug used to quickly reverse an opioid overdose.

These precautions can help Bri moderate her risk of overdose, and research shows that is one main way that drug testing saves lives — whether it’s done through a machine like the MX908 or lower-tech methods like fentanyl test strips. 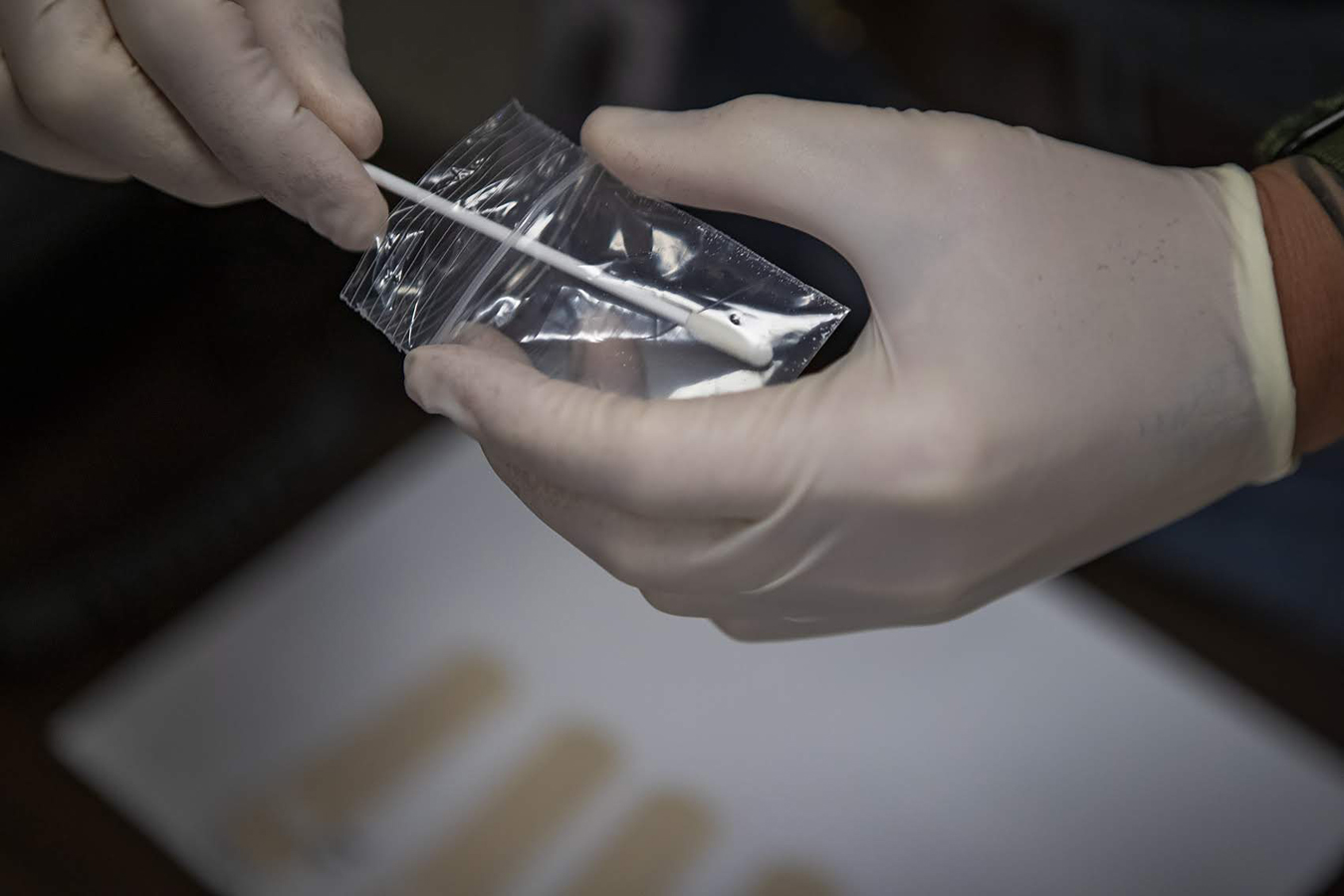 A swab is used to take an initial trace sample of the substance in the bag, before testing with the MX908.(Jesse Costa/WBUR)

Another way drug-checking can save lives is by alerting local authorities, like the Boston Public Health Commission, that deadly concentrations of opioids have been found in the local drug supply.

It’s complicated, however. Addiction is such a powerful disease that such warnings might actually spur use, unintentional advertising that draws people seeking an ever-more powerful high.

But Traci Green, a researcher in emergency medicine at Rhode Island Hospital and Brown University, said her research, as well as some European studies, show that drug-testing is ultimately beneficial: When drug users have the power to test what they buy, they seek out drug dealers with the safest supply.

“So this improvement in consumer knowledge and confidence in what they’re getting, and how to use it, can improve the safety of the larger supply,” Green said.

Green will evaluate this trial run of the MX908 in Boston. She said she’s especially interested in learning whether its deployment can attract hard-to-reach drug users, the ones who traditionally avoid contact with any institutions or medical care. Access to the MX908 might bring them into a setting where they begin to interact with outreach workers, and possibly begin a conversation about treatment. 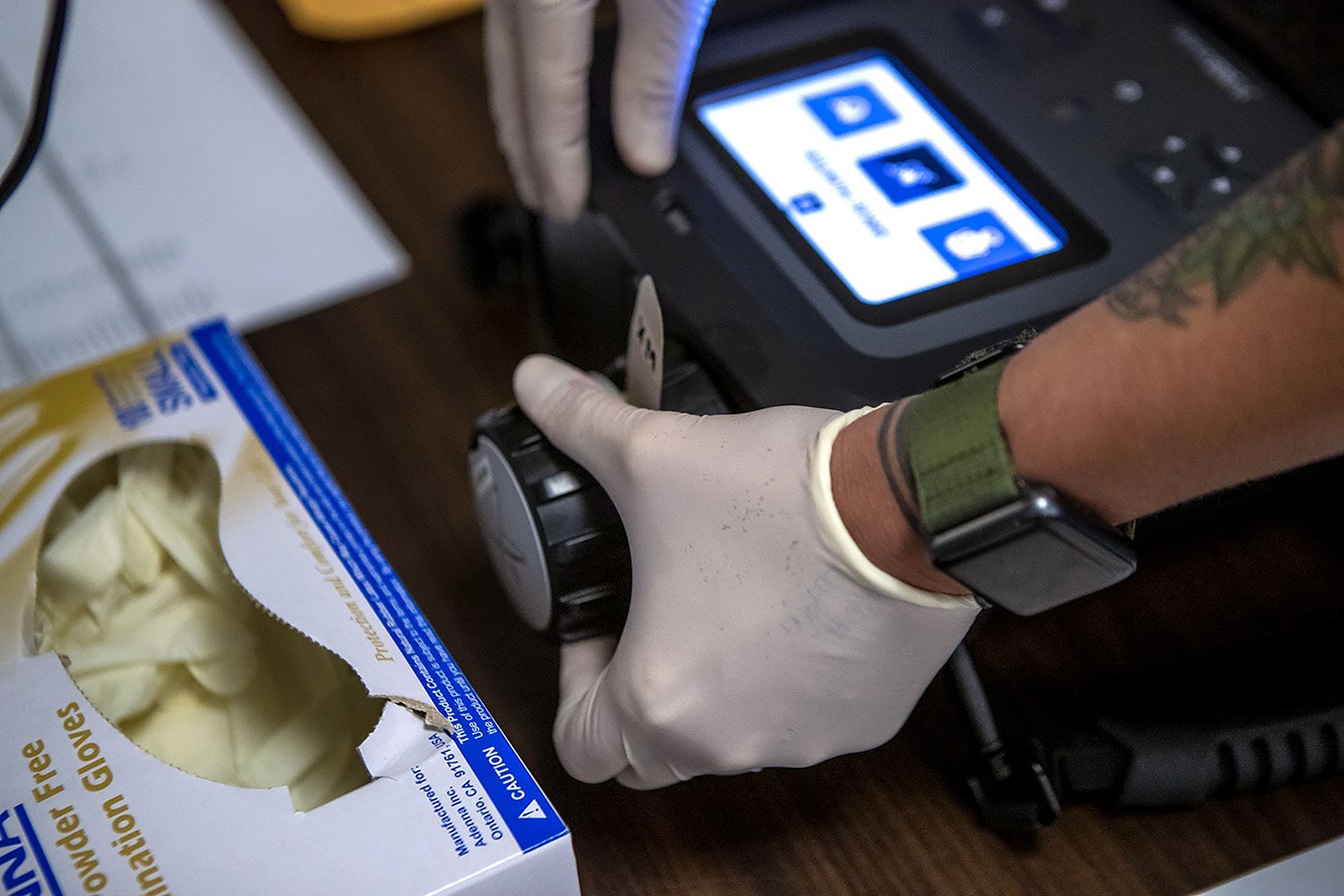 Mackin spreads whatever residue the swab picked up onto a test strip that resembles a Band-Aid, then slides the strip into the MX908.(Jesse Costa/WBUR)

One other city, Chicago, also is testing the MX908 as a harm reduction tool for the opioid crisis. But there are reasons why it may not be more widely adopted. One is the price tag: $65,000.

In Boston, the city paid for the device through a grant from RIZE Massachusetts, a foundation focused on combating the opioid epidemic.

“Cost is one concern,” said RIZE CEO Julie Burns. “But what is the value of a human life? If we decide through the evaluation that this is something that is reducing overdoses, I believe it is worth the investment.”

Still, there are cheaper ways to find out if a drug baggie contains fentanyl.

Street outreach workers have been distributing fentanyl test strips, which cost about $1 apiece, for more than two years. The current Massachusetts state budget includes $150,000 to expand access to these test strips.

Like the MX908, the strips show the presence or absence of fentanyl — though the machine can offer much greater detail, as well as information about the presence of several types of stimulants. (Neither the machine nor the test strips can reveal how much fentanyl is in a baggie.)

For now, harm reduction programs will have to decide which drug-testing tool is most cost-effective, based on their goals and budget, said Greg Scott, who leads the Chicago Recovery Alliance, or CRA. The CRA began an extensive drug-checking program in March that includes two MX908s.

Scott said that, so far, the MX908 is delivering on two goals: helping people use drugs more safely and offering real-time information about the drug supply in Chicago. But Scott said unless drug-checking becomes much more widespread, it won’t force drug dealers and suppliers to “clean up” the drug supply.

“Getting to that scale and that level of impact is a very costly endeavor,” Scott said.

Another reason public health workers may hesitate to use the MX908 is that doing so may be illegal in their jurisdiction.

“Drug-checking is a legal gray area,” said Northeastern University law professor Leo Beletsky. “There are provisions in Massachusetts law and the laws of pretty much every other state that might be interpreted to consider drug-checking devices as ‘drug paraphernalia.'”

That includes fentanyl test strips. Illinois enacted legislation in August that exempts people who test their drugs from prosecution. In Massachusetts, lawmakers are reviewing a proposal to make use of drug-checking tools legal.

Boston police said they aren’t involved in the MX908 pilot and referred questions to the city’s public health commission. The U.S. attorney’s office in Massachusetts declined a request for its perspective on the use of this device for public health purposes.

The MX908 is also used in more traditional ways by police, fire and hazmat teams across Massachusetts. Even they have found that the leading enemy agent is fentanyl, said David DiGregorio, who directs the hazardous materials emergency response division at the Massachusetts Department of Fire Services. His department has about a dozen of the machines.

“If you had asked me if I was going to be involved in drugs five years ago, I would have said, ‘No, it’s not my job.’ It’s become my job,” DiGregorio said. “Hazmat calls are up in the last two years, exponentially, and a lot of that has to do with drug calls, because we can identify these powders in the field.”

Built For Counterterrorism, This High-Tech Machine Is Now Used To Detect Fentanyl